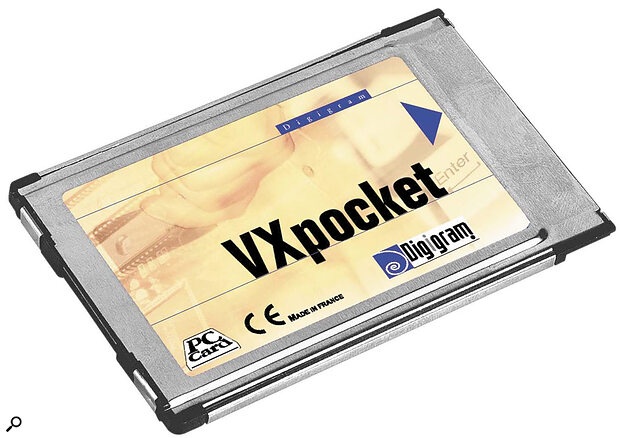 Laptop computers have tended to be difficult to use for music, one of the main problems being their limited or non‑existent audio I/O. Vo Fletcher tries out a product which eliminates this shortcoming.

As most people know, there's no technical reason why you can't use a portable computer for audio recording in the same way you use a desktop one. A G3 processor is a G3 processor, whether it lurks in a tower or a Powerbook Mac. But, until recently, there was no I/O hardware suitable for getting analogue audio into laptops. This was a shame — the option of making the core of your recording setup portable is an attractive one. Although I already have a perfectly good desktop music system based around a Mac running Logic Audio, the nature of my work means that some form of portable system would also be useful for working on location or playing work in progress to programme producers. Having just bought a Mac Powerbook G3, therefore, I was interested to hear of the Digigram VXPocket. The VXPocket is a PCMCIA‑format card which slots neatly into the computer, providing stereo analogue ins and outs at 16‑bit resolution as well as S/PDIF in and out. The VXPocket's A‑D and D‑A converters are actually 24‑bit‑capable, and 24‑bit ASIO drivers are scheduled for release later this year.

All the testing in this review was done using a Mac, but the card is designed for use with laptop PCs as well. Mac users should note that the VXPocket will only work with Powerbook G3, 3400, and 2400 series machines running PC Card Manager 3.0. Due to hardware issues related to the PC Card interface, the VXPocket won't work with the PowerBook 190, 5300, and 1400 series. You must have the Sound Manager Control Panel installed, as input and output selections are made from there. Digigram also recommend that you run System 8.6 or later.

One of the limitations of a plug‑in card like this is lack of space for the audio connectors, so an included breakout cable is supplied. The analogue I/O emerges on balanced XLRs (which may be used unbalanced) while the S/PDIFs are on phono sockets. The analogue ins can be switched to mic or line level via the included VX Control Panel software, where you can also select the sample rate (32, 44.1 or 48kHz). The signal‑to‑noise ratio is quoted as better than 94dB unweighted, with the total harmonic distortion plus noise better than ‑89dB, also unweighted. These figures are comparable with those achieved by outboard 16‑bit converters, and it will be interesting to see what improvement comes about when the forthcoming 24‑bit driver is used.

At the time of review, the latest VX ASIO driver was version 2.2.4. A quick visit to the Audio Driver preferences in Logic enabled me to check the ASIO box and choose Digigram VX ASIO as the current driver. It's also OK to leave the Mac AV checked as well, if you want some tracks to come out via the card and others via the standard Mac audio I/O.

The first test was obviously to try getting some audio into the Powerbook. It's possible to select the input source (mic, line or digital) from the VX Control Panel but the Mac version offers no means of adjusting the input gain, although the PC version does. This is nothing to do with MacOS, apparently, or the Powerbook audio hardware, but is down to differences in the software drivers for the Mac and PC. As it stands, the preset mic gain seems about right for a Shure SM58 recording vocals, but having no analogue trim control means you've no way of optimising the gain structure — but you need to adjust the levels at source to get the highest level signal without clipping. Under normal circumstances, it would probably be best to use a mixer and feed this into the line input of the card with the Control Panel set to Line.

If you monitor new audio parts while recording, the latency can be enough to throw your timing (it sounds like a tight slapback echo), so as with most systems that can access host‑based processing, the best approach is to turn off the monitoring (a check box in the Control Panel window) and arrange to monitor your input via a mixer or other suitable system. A setting of ‑1 in the ASIO buffer Delay Out box ensured my tracks played back in time with each other. I tested the timing by recording a drum machine on one track and then playing this back against the original MIDI part. The timing was tight enough to create a flanging effect, which I usually take as being close enough.

The sound quality of the analogue inputs is at least the equal of a decent DAT machine in subjective terms, and bears out the published signal‑to‑noise ratio, though it remains to be seen how good the forthcoming 24‑bit mode will be. The mic input also performs reasonably well, but the lack of phantom power or mic amp gain trim means that most people will still need to use a mixer or external preamp. Including phantom power in a card such as this just wouldn't be practical, but I would have thought some form of mic gain control would have been possible, and would be essential for setting the correct record level during location work where no mixer was available. Just before SOS went to press, we heard from Digigram that a planned driver upgrade should give Mac users the same input gain adjustment options that PC users have, but at the time of writing this is still in development.

If you want to work on the move using a Powerbook computer or suitable laptop PC, the Digigram VXPocket card is one of the few solutions available for getting audio in and out, though it inevitably costs more than its full‑size PCI equivalent. The analogue audio quality is extremely good, and installing the card turned out to be relatively simple. However, the documentation could be more helpful for the benefit of those who haven't done this kind of thing before. In spite of its few minor shortcomings, I ended up buying this card, which now provides me with a simple and reasonably elegant solution to my need to work on the move. All I need now is a Roland JV1010 built into a PCMCIA card to go into the other slot and I'll have a near‑perfect 'in‑computer' system!

The Digigram VXPocket enables a suitable laptop to function as a serious audio workstation.