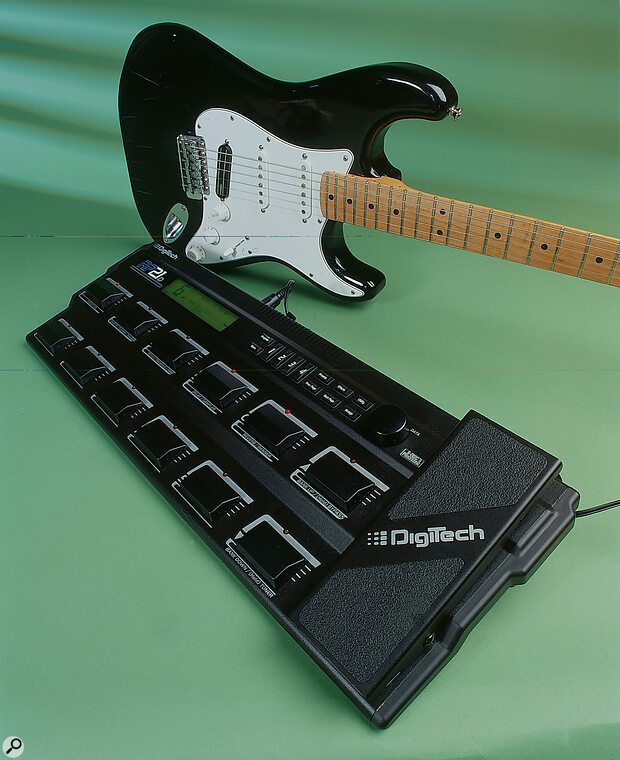 Digitech's RP21D, with its digital output, is aimed at both studio and live use. John Walden joins the digital age...

Guitarists have never had it so good. The range of guitar multi‑effects processors now available is incredible and the balance between price and performance continues to improve. Whatever your price point, it is difficult not to buy something that can produce very useable guitar tones. The latest in the line from Digitech is the RP21D. While its pedal‑board housing might suggest it is intended for live use, the functionality and, in particular, the provision of a digital output suggest that this unit also has a lot to offer in the modern studio.

The RP21D's controls combine the chunky footswitches required of a guitarist's stomp box with the smaller function buttons and data wheel of a rackmount multi‑effects unit.

The RP21D is a solidly built floor unit measuring 22 x 6 x 61cm and weighing about 12lbs (5.5kg). The physical appearance is similar to that of its predecessor, the RP20. Two rows of six footswitches dominate the board and are used for patch selection, turning individual effects on/off and providing access to facilities such as the tuner. The expression pedal can act as a volume pedal or can provide real‑time control of effects such as wah, but also has the ability to 'morph' between two different sounds. The upper portion of the board is dedicated to editing, featuring a very clear display, a data wheel and various editing buttons.

Analogue input is via an unbalanced jack with level control. Analogue output is via a stereo pair of balanced TRS jacks (nominal level +4dBu, though a level control is provided) and a stereo headphone output. A‑D and D‑A converters operate at 20‑bit resolution.

Along with a software update and new patches, the addition of an S/PDIF output is probably the most significant difference between the RP21D and the RP20. During the review, this output worked perfectly while connected to the S/PDIF input on a Yamaha DSP Factory soundcard. In the absence of an input signal, the digital output was marginally quieter than the analogue output, but both were perfectly acceptable and I couldn't easily distinguish between the outputs in a blind A/B test. Witheven some consumer soundcards now including digital I/O, however, perhaps more comprehensive documentation on this facility would not go amiss in the otherwise pretty good manual.

The processing muscle is produced by a combination of analogue and digital technology. The preamp section is essentially analogue, including a single 12AX7 tube, while the digital effects are handled by a single S‑DISC II (Static‑Dynamic Instruction Set Computer) processor working at 24‑bit resolution. The manual claims a frequency response from 20Hz to 20kHz and a signal‑to‑noise ratio greater than 90dB.

The hardware specification is rounded off with MIDI In and Out/Thru, so the unit can be fully integrated into a sequencer‑based studio. There is no on/off power switch and the power supply itself will unfortunately add to your wall‑wart collection.

Not only does the back panel sport analogue I/O and associated level controls, but it also boasts MIDI In and Out along with the all‑important S/PDIF digital output.

Memory capacity allows 128 factory and 128 user programs. The basic construction of a patch is similar to that of the 2120 Artist (see SOS December 1998 review): in essence, the input signal is fed first to the preamp and then passed to the digital effects section. Editing can be taken to considerable lengths, but both the preamp and each of the digital effects have a number of presets that can be selected as starting points, allowing patch creation to operate at a number of levels. User‑defined programs can be stored, and this can be particularly useful if you create, for example, a favourite preamp configuration which you end up wanting to use in several patches.

The preamp stage consists of a fixed sequence of processors in the following order: compressor, wah, tube/distortion, EQ, gate. As with the RP20 and 2120, the tube and solid‑state distortion modules can be run either individually, in series or in parallel (ie. panned left and right) and each has its own 10‑band graphic EQ. The digital effects include all the usual suspects (see 'Effects Highlights' box below) and a set of 15 configurations split the available processing between them. For example, all the processor's time can be allocated to a single effects block, such as a high‑quality reverb, or it can be split equally between four different effects (each being allocated one quarter of the processor's power).

The speaker emulation can be placed either before or after the digital effects and can be adjusted globally, which is useful if you move from live to studio environments on a regular basis. The RP21D also includes some nice modulation facilities: for example, an effect parameter such as the amount of chorus in a patch can be controlled by the envelope of your guitar signal (how hard you hit the strings) or by an internal LFO.

The RP21D provides an excellent range of guitar tones that go from jazz, country and blues through to rock, metal and grunge. The factory patches tend to emphasise the latter end of the spectrum and, as with many guitar multi‑effects units, are designed primarily to demonstrate the significant processing power available.

While I found myself taking a little top end off many of the patches, the huge range and quality of the sounds was very impressive. Some of the inspiration for the factory patches is pretty obvious: patch seven ('Run Like Heck'), for example, is great with a Strat for a certain Bryan Adams track! Patch 47 ('2 Tone L/R Grinder') pans the tube and solid‑state distortions left and right to produce a fabulously OTT grunge rhythm tone and really does sound like double‑tracked guitars. Patch 55 ('Whammy Child') shows off the pitch‑shifting by replicating some very extreme use of the vibrato bar via the expression pedal, while the synth‑like patch 114 ('Chord Sweep n Pan') is a good example of the how the internal modulation options can really spice up your patches.

Conveniently, if you want to audition the preamp on its own, patches 26 to 35 are 'dry'. In comparison with Digitech's own 2120 Artist or something like the Line 6 POD, I felt it took a little more work to tweak the preamp section when searching for a basic guitar tone. Some of this is inevitably down to the user interface, as both of these other units have dedicated front‑panel gain and tone controls which allow any guitarist to use them in a manner more akin to how he or she would work with a real amp. The RP21D generates excellent clean or overdriven sounds, but is perhaps marginally weaker at those in‑between sounds that blues players love so much. Perhaps the second 12AX7 valve in the 2120 might account for some of these differences. However, the digital effects are up to the usual Digitech standard and would put some dedicated effects units to shame.

The RP21D is a high‑quality unit, capable of a fabulous range of guitar tones, and its S/PDIF output means that those tones can be accurately recorded. If you need versatility in your sound palette, then the Digitech can deliver. Sound editing is comprehensive and straightforward, but at this price point there is a lot of competition. For example, given the choice, I think Digitech's more expensive 2120 Artist (now being advertised at something lower than its original asking price) has a clear edge, both in terms of sound and those dedicated gain and tone controls. Line 6's rackmounted POD Pro, announced at the winter NAMM, also has a digital output and should be available soon. The bottom line? Competition has meant some great price/performance advances for guitarists, but it has also resulted in some very difficult choices!

The RP21D has a wide range of digital effects available. These include:

A very good all round performer, whether live or in the studio. Digitech are to be commended for providing digital outputs on a guitar multi‑effects unit. You can not go far wrong with the RP21D, but at this price point there is a lot of worthy competition.