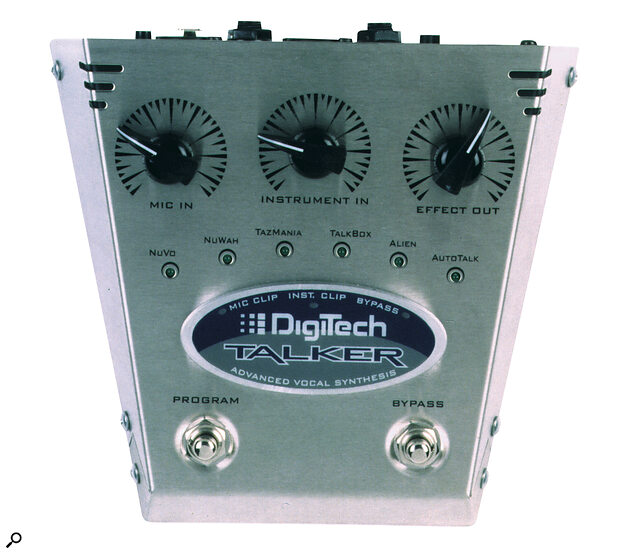 Paul White discovers that it's good to talk, especially when you have some help from Digitech.

No doubt the guitarists amongst you will remember the talk box with a mixture of nostalgia and nausea. The idea was to play the guitar via a tiny amp and speaker mounted in a floor unit, then pipe the speaker output up a piece of garden hose into the player's mouth. If you then tried to pronounce words with this contraption in your mouth, the guitar could be made to talk or sing, and the result could be picked up via a conventional vocal mic. One obvious drawback was the copious amount of drool that this performance generated, earning the player several negative pose points. Another was the worry of physiological damage, and while I don't know to this day if the stories were true, there used to be all kinds of dire warnings about disintegrating molars, stomach problems and liquified sinuses! Fortunately, technology has now brought us an alternative.

Digitech are perhaps best known for their effects processors, in particular the Vocalist range of automatic harmony generators which utilise proprietary technology developed by Canadian company IVL. The Talker reviewed here is also an IVL design and can be thought of as a modern‑day incarnation of the talk box concept, in that it can give a guitar (or other instrument) the ability to articulate speech. Superficially, the concept isn't unlike that of the vocoder, but this particular device is rather more sophisticated and is based on IVL's research into vocal modelling.

Presented in the familiar stomp‑box format, the Talker is clearly designed with the live guitarist in mind, which might lead you to wonder why we're looking at it in SOS. Leaving aside for a moment the fact that the last reader survey we did confirmed that over half our readers play guitar, the really interesting thing for me is what this box can do in the studio when fed from a variety of sound sources — not just guitar. Any harmonically rich sounds can be 'vocalised', but you don't even have to feed in a voice if you don't want to — imagine what you could create by modulating a synth pad with a drum machine rhythm, or one synth patch with another. With the current trend for taking sounds and bending them into new shapes, I can imagine the Talker going down very well in techno and dance studios.

Based on digital technology and providing an audio bandwidth of 10Hz‑14.5kHz, the Talker is packaged in a seriously tough, stainless‑steel floor unit that looks like a kind of Electro Harmonix unit on steroids. Power comes from an external adaptor (included), because the circuitry is far too greedy to be content with mere batteries, and in addition to the instrument input jack, there's a balanced XLR mic input (with switchable +4dBu/‑10dBv Pad switch), an amplifier output jack, and a balanced PA feed. The PA feed is provided so that a live performer can use the main vocal mic for 'Talking' without having to re‑patch. A small three‑way slide switch sets the processed signal routing to Amp, PA or Both, and a level preset adjusts the level of the PA feed signal. Line‑level signals may be be used instead of the mic source, as long as you keep an eye on the levels and set the Mic Gain control accordingly.

The front panel is furnished with three knobs, six LEDs and two momentary‑action footswitches, one for bypass and the other to step through the Programs. Programs? What Programs? Well, though the Talker isn't actually programmable, it does feature six distinctly different effects modes, or Programs, and repeatedly pressing the Program switch will cycle through them. The six LEDs on the front panel each indicate a Program type, with three further LEDs showing mic and line overload and bypass. When a metering LED shows green, the input signal level is on the low side, when it shows orange, it's ideal, and when it shows red, clipping is imminent. Pushing the Bypass button gets the Talker out of Trappist mode and ready to chat. The mic input seems to have a built‑in gate so that the effect is not triggered by low‑level crosstalk, but this does mean that you have to work close to the mic to guarantee a consistent output.

TalkBox' is a vocoder‑type setting, optimised to resemble the old voice‑box tone but without the dribble or the exploding teeth!

The first Program is called 'NuVo', and provides the classic Vocoder effect with good intelligibility. Both inputs need to be present to generate an output. Some of the original voice signal appears to be high‑pass filtered and added back to the vocoder sound to emphasise sibilant and fricative sounds, and if the mic level is set too high, there may be too much of this in the final signal. For studio use, compressing the mic signal prior to processing might be a good idea. Though designed for guitar use, this program works exceptionally well with any harmonically‑rich keyboard sound.

Next up is 'NuWah', a type of guitar auto‑wah that doesn't use the vocal input at all. Essentially, this is an envelope‑follower system, but because of the highly vocal filter in the Talker, this sounds more humanoid than a typical auto‑wah. Once again, any synth sound with a well defined envelope can be used with this setting.

The next Program, 'TazMania', isn't very musical and can either use the mic on its own or combine the mic sound with the instrument sound. This setting uses radical filter settings to produce a harsh, somewhat robotic voice that still manages to be reasonably intelligible, but once you've said, "So Doctor, finally I have you at my mercy!" a few times, it's hard to know what else to do with it. Actually, if you stick the mic down a piece of plastic waste pipe, then wave it in front of the monitors, you get some quite good sci‑fi fly‑past sounds!

'TalkBox' is another vocoder‑type setting, this time optimised to resemble the old voice‑box tone, but without the dribble or the exploding teeth! This produces a thinner, more edgy tone, again with excellent intelligibility, so even if you can't sing all that well, you're guaranteed to be able to get your lyrics across in perfect pitch, just so long as you play the right notes on the guitar or keyboard.

The Talker may have been conceived as a guitar player's stomp box, but it's also a very creative studio tool and works well with keyboards or other sound sources.

'Alien' is the fourth setting, and this generates a type of vocoder effect. The voice character is shifted up in pitch slightly to create a Mickey‑Mouse‑meets‑ET feel — good for Babylon Zoo impressions. As with the preceding vocoder effects, both inputs are needed to generate an output.

The final Program is 'AutoTalk'. This is another vocoder effect, but when you stop singing a gate switches in and allows the instrument sound to come through as normal. This could work very well, but the changeover between the vocoded and straight sound is too abrupt, and the level tends to change too. This is fine if you swap over during a pause in playing, but it's not so good for morphing keyboard sounds into vocoder sounds. To make it really successful, the final filter setting would need to be held, and then the clean instrument sound faded in over half a second or so while the vocoder sound fades out.

The Talker may have been conceived as a guitar player's stomp box, but it's also a very creative studio tool and works well with keyboards or other sound sources. In fact, you can design a lot of interesting new sounds by using one of the vocoder modes to modulate one sound with another — for example, synth strings with heavy breathing, or a Wavestation pad articulated by a drum machine pattern or drum sample loop.

If you use the Talker as a vocoder, its intelligibility is better than most I've heard and there's no obvious crosstalk when only one signal is present (due to a type of gating circuit), but the input levels can be a bit on the sensitive side, so compression would be a good idea if you don't have good vocal control. I also like the different modes, though 'NuVo' and 'TalkBox' are arguably the most useful, and the talk box emulation is surprisingly authentic. For a guitar input to work well, it needs to be heavily distorted to provide enough harmonics for the filters to chew on.

If you're looking for this type of device, at around £250 you have a choice between the FAT PCP330 Procoder vocoder (reviewed SOS November 1997) or the Talker, both of which have their own character. The Talker is undoubtedly better for live performance, as it has mic and signal‑routing options specifically for that purpose, but I know I could have a lot of fun with it in the studio. And of course you don't have to feed it live vocals — you could use a pre‑recorded vocal track and a MIDI instrument track to give repeatable results if you don't like life on the edge. The Talker is fun, affordable and sounds great, which alone is enough to guarantee its success.

A useful and creative vocoder‑type device that offers something a little out of the ordinary in a very straightforward package.

Field Music: Building A Track In The Studio
1 month 6 hours ago.