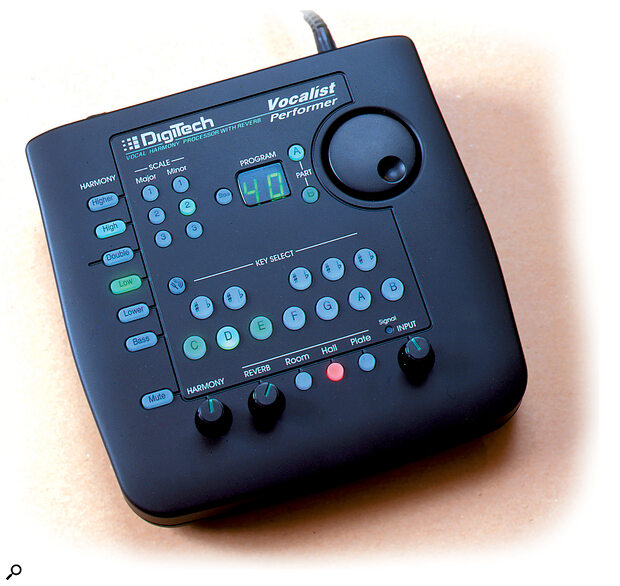 This new Vocalist has been designed to be easier to use than ever. Martin Walker sings up a storm in three‑part harmony...

The Digitech Vocalist Performer is intended specifically for solo singers, acoustic or electric guitarists, or keyboard players, and comes in a desktop package designed from the ground up to be easy to use. Digitech have done away with the need for cryptic LCD screens and have replaced them with a set of illuminated buttons, and a data wheel. The Vocalist Performer has a balanced mic socket on its back panel, and its intended use is obvious — direct connection straight into a PA or recording system.

Digitech have carved out quite a niche for themselves in the area of vocal harmony processors, and with the arrival of the Vocalist Performer there are now four models in the series. The top of the range is still the Studio Vocalist (reviewed in the August '95 issue), a 2U‑high, rackmount device which allows up to four harmonies to be added to the original voice, and gives a choice of gender too! The MIDI Vocalist, a simpler unit which still allowed four additional harmonies, but with an easier‑to‑use interface and MIDI control, was released next (reviewed July '96). This was followed by the Vocalist Workstation (reviewed March '97), a desktop unit with most of the effects of the top‑end Studio model, but at a much lower price. The Vocalist Performer, under review here, costs around the same as the MIDI Vocalist, but can only produce two harmony notes, though it adds a built‑in reverb.

The Vocalist Performer's casing is 'cute hi‑tech', and is quite small and light, weighing just 1lb. However, there is still sufficient weight to stop it sliding about when you're adjusting the controls. The ergonomics are excellent, and the basics can be learned in a minute or two. Every one of its 30 or so buttons is illuminated (either red or green), and although the actual buttons feel a bit wobbly and rubbery to the touch, once the unit is powered up this illuminated approach makes everything feel extremely responsive. The soft‑touch buttons have the added advantage of being totally silent in operation, which is important if the unit is being used by a vocalist in a studio environment.

The back panel is straightforward — apart from the socket for the supplied wall‑wart (inevitable, with such a bijou case) there's a balanced XLR mic input, a quarter‑inch jack line input (which overrides the mic when something is plugged in), a pair of quarter‑inch jack outputs (Left/Mono and Right) and a quarter‑inch jack footswitch socket which can be used to switch the harmonies in and out. On the front panel, the basic controls are in a horizontal strip along the bottom.

The first control to play with is the Input level rotary, with accompanying two‑colour LED (green shows signal present, and occasional flashes of red show a suitable signal level). The other two rotary controls adjust the level of Harmony voices (with an associated Mute button) and Reverb; three preset types (Room, Hall or Plate) are available.

Since the Performer provides intelligent harmonies that fit the key of the song, a bank of 12 buttons above the rotaries allows you to select every key note in the octave; a further Cue‑in button sounds the root‑note pitch until it is pressed again (the Reverb level control also acts as a volume control for the Cue‑in function when it is activated). The actual harmony notes are chosen from a vertical strip of buttons down the left hand side of the case. Since there are only two harmony notes available in addition to the input note, only the two most recent button‑presses have any effect — pressing another one if two are already in use cancels the one least recently used. The Double option provides a slightly detuned version of the same note, Low, Lower and Bass produce harmonies below your voice, and High and Higher do the same above your voice. The actual intervals used are determined not only by the key selected, but also according to what's been selected from six Scale buttons — three each for Major and Minor.

Finally, you can select from the Vocalist Performer's 50 preset Programs by rotating the data wheel. Two buttons, labelled A and B, allow quick changes between two completely different settings of the unit, for different parts of a song, for example; these two settings can also be selected with a special 3‑way footswitch available from Digitech for another £50. The current Program number is indicated by a 2‑digit 7‑segment LED display, and the Store button allows you to save your own Programs to replace any of the factory settings.

Once you've set up a suitable input level, the Vocalist Performer is simplicity itself to use. Skipping through the presets quickly shows the main uses of the unit — the Bass button provides a voice one octave lower, for that gospel sound, and the Double button gives you a second voice with sufficient pitch imperfections to sound like someone singing in unison. Of course, these two options need no separate setting of key or scale — this is only needed when accessing the other Harmony buttons. High and Lower are 'smart' voices that produce third intervals (a third above or a third above the octave below), and Higher and Low produce fifth intervals in a similar fashion. Since there is no MIDI input, chordal harmonies (based on whatever keyboard chord you are playing at the time) are not available; the six Scale buttons follow the rules of Scalic harmony, and the manual provides practical details of the different options given by these three major and minor scales (see 'Scaling the Heights' box).

This is an easy to use device that would suit live as well as studio use.

When both Vocalist Performer outputs are patched into a stereo input on a mixer, you hear the reverb effect in stereo, and thepan positions of the two harmony voices are intelligently set, so that a single harmony sits in the centre with the original sound, and if two harmonies are selected they are panned hard left and right, for a really big sound.

Studio tests confirmed that the Performer works equally well on sampled or live vocals, though if the vocalist isn't singing in isolation, any background sounds also tend to get processed, and this can sound weird. For example, if you're singing and playing the acoustic guitar at the same time, the shifted guitar spill becomes very dissonant and electronic sounding. While the pitch‑shifted sound is surprisingly good in context, it isn't entirely natural when heard in isolation, having something of a vocoder quality about it. Furthermore, if you slur your notes too much, the abrupt jump in harmony pitch that results can sound less than convincing, but if the harmonies are kept below the level of the main vocal, the overall effect is good. Certainly there's no Mickey Mouse effect, as there is with a basic pitch‑shifter, though the sounds still have a kind of electronic gloss to them. The low‑octave emulation is exceptionally good and could just about be used on its own for that 'Darth Vader meets Chris Rea' vocal sound without needing the original vocal to disguise it.

The Vocalist requires a healthy signal level to track properly, especially if there is the risk of spill from other sources, but if the vocals are close miked, tracking is generally good providing the vocal performance isn't too sloppy. Because the scales are presets, you may not always get the harmony you envisage, but at least the results will usually be musically valid.

You don't need to know any music theory to use the key and scale buttons properly — just press the Cue‑in button and adjust the key until the tone is the root note, then press any of the scale buttons until the harmonies seem in tune. The manual explains the intervals involved, as well as giving some pointers for various effects. Within a couple of minutes I had the Bee Gees mastered, as well as Gregorian Chant. You can even use it for educational purposes, as you quickly learn a lot about harmony in the context of an arrangement.

The reverb is of good quality — as you'd expect; Digitech already know what they are doing in this department. There's no user editing available, other than reverb level, but the reverb does help to create a finished sound straight out of the box. The only untoward thing I noticed on a couple of occasions was slight breakthrough of the harmony signals even with the rotary control turned right down, but this disappeared as soon as the Mute button was pressed, and so shouldn't prove much of a problem with normal use.

This is an easy to use device, with a bright display that would suit live as well as studio use. It doesn't have fancy options such as gender‑bending or vocal pitch correction, but you really wouldn't expect these on a unit at this price. There's no phantom power for mics which need it, and this might affect your mic choice a little, but in general the Vocalist Performer interfaces well with a variety of sources. I'm not sure that I agree with Digitech's assertion that not having MIDI is a 'feature', but it does make the Performer simpler to use. Its sound quality is good, and if you do want to use it live, the manual mentions a mic‑stand mount, which should bring the controls easily within reach.

Many multi‑effects units provide pitch‑shifting, but very few have intelligent harmonies which follow a scale. The main competition probably comes from the rest of the Digitech range. If you want pitch‑correction or gender‑bending, both the Vocalist Workstation and the Studio Vocalist will be more suitable, but at a much higher price. The closest unit to the Performer in terms of cost seems to be the Digitech MIDI Vocalist, which is £30 cheaper than the Performer and offers four harmonies as opposed to two, but has no presets or reverb. For live performance use, the Vocalist Performer has the edge, with the MIDI Vocalist probably more suitable in a studio context. However, another factor that needs to be taken into account is that circuit design has also come on a bit since the MIDI Vocalist was first released; its 32kHz sampling rate has been bettered by the 48kHz of the Vocalist performer.

The final icing on the cake for the Performer is its presets, which are only otherwise available on the two high‑end Vocalist models. Each of the 50 presets has two complete A and B settings to cope with typical key changes within a song. In the right hands, and with a little care, this little box should work wonders, as well as astonishing many audiences. Chanson D'Amour anyone?

The manual avoids technical explanations of the scale modes, preferring to illustrate by example. If you are playing in E, here are the chords that work with each of the scales provided:

A neat and elegantly designed unit that should appeal to both live and studio performers on a budget.