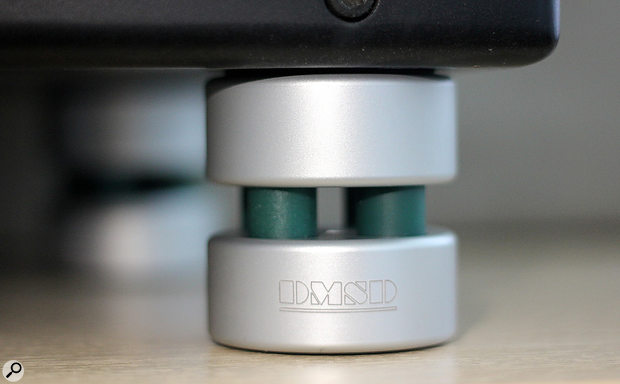 I hope Dave Mastrodonato won’t take offence when I say that it’s unusual for someone to be quite so passionate about speaker decoupling! An experienced audio producer and musician, he also spent 22 years working in a parallel career as a product specialist in the aerospace industry. Having tried various speaker decouplers over the years, he’d grown frustrated with their performance, and believed he could apply his professional knowledge of advanced materials with very high anti-vibration characteristics to come up with something better.

The result, the DMSD 60 Pro, looks very simple yet stylish, comprising eight small circular platforms, four intended for each speaker in a stereo setup. Each platform is made from a hi-tech aluminium alloy and a special rubber compound — Mastrodanato has naturally kept the precise details of these secret, but he informs me that the rubber actually expands as it’s put under greater load. The surface pads are again a type of rubber, designed to be very grippy, to prevent undesirable movement due to speaker recoil.

The DMSD 60 Pros are intended to accommodate medium to large speakers, rather than nearfields (there's a separate DMSD 50 model for that, which we hope to review soon). The official specs state that the DMSD 60s will bear speakers weighing from 10 to a whopping 180 kg; actually, Mastrodonato believes they could potentially handle much greater loads than that, though as he hasn’t tested that theory, that specs nonetheless state a maximum of 180kg. The flexible nature of the design also means that each set of four can host speakers of a variety of shapes and sizes.

What’s important, of course, is how well they work, and I can certainly report that they work very well with speakers at the lower end of their weight limit — I first used them with my Dynaudio M1 monitoring system, in which each speaker weighs 11.2kg, putting them just inside the lower weight threshold of the DMSD 60s. I put the speakers side by side on a desk (which I can hear and feel vibrating when speakers are placed on it!) and ran some mono material through each, using my MC2 amp’s mute buttons to audition one speaker at a time. First, I placed one speaker directly on the desk and the other on the DMSD decouplers and, as expected, the difference in sound was night and day, so they were certainly achieving something useful. But all decouplers should manage that, so just how good were these?

To answer that, I left one speaker on the DMSDs, and placed the other on one of the IsoAcoustics ISO-L8R430 stands I’ve been using for the last few years. The differences were less obvious, but I still discerned noticeably less vibration being transmitted through the DMSD decouplers; the sound emanating from the DMSD-mounted speaker seemed that bit tighter in its lower frequencies. Considering the words of praise I’ve written about those IsoAcoustics stands in the past, I found that impressive!

I don’t currently have heavier monitors in my studio with which to test decouplers such as this, so instead I place a very heavy guitar amp combo and a few other heavy boxes on the DSMD 60 Pros. They bore the weight perfectly well and tightened the sound admirably, so I’ve no reason to doubt Mastrodonato’s claims that these will work well with very heavy speakers.

Alas, the aerospace industry’s high-tech materials are also high-cost ones. DMSD have taken a cost-no-object approach to the design, and that’s reflected in the price of the DMSD 60, which costs as much as some home-studio monitor speakers! But that’s fine, as there are other worthy products for that audience; I still consider that my IsoAcoustics ones offer superb performance for the money, and there's also Mastrodanato's much more affordable DMSD 50 model mentioned above — I'm very much looking forward to testing them, as if anything they should be better suited to my Dynaudio M1s. Mastrodanato obviously has a professional-studio market in mind, and for that market the DMSD 60 Pro would be well worth investigating. I can’t think of a competing product that can work so well with such a wide range of monitors, and they should last a lifetime.

€570 including VAT for a two-speaker pack.