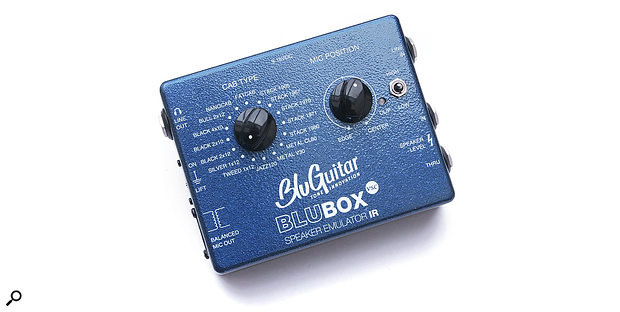 This little box puts the sound of 16 miked cabinets at your feet and, unlike convolution software, can sit between an amp and cab.

Speaker-emulating DI boxes are nothing new, but guitarist Thomas Blug (who, you may recall, came up with the pedal-sized BluGuitar Amp1 100W amp head: http://sosm.ag/bluguitar-amp1), felt he needed something a little different from what was already on offer. Most stand-alone hardware speaker emulators are based on analogue filtering but, to get more detail into his emulations, Thomas used convolution — something that’s already used very successfully in many software amp emulations but is much rarer in hardware. By using impulse responses taken from different speaker cabinets, their character can be applied quite convincingly to the line or speaker output of your own amplifier for DI’ing into a PA or recording system. Similarly, the BluBox can be used to process the output from a guitar preamp or even from a pedalboard. (Note that the unit does not include a dummy load, so valve amps must be used with the speaker connected or with a suitable dummy load.) Apparently, Thomas used his own speaker cab collection when creating the impulse responses.

The BluBox can accept line- or speaker-level signals via separate jack inputs and has outputs on both phones/line (quarter-inch jack) and balanced XLR. The speaker-level input also feeds a thru jack connector so that BluBox can be inserted between an amp and its speaker. A transformer isolates the XLR output, which is fitted with a ground-lift switch to avoid hum in live setups. Power comes from an external (optional) 9-18 V PSU and a three-way sensitivity switch sets the input sensitivity. A dual-colour clip LED shows green when an adequate signal is being received, while red indicates the onset of clipping.

The BluBox offers a simple dial-to-select choice of 16 speaker cabinets. The impulse responses are derived from a collection of Marshall, Fender, Vox, Roland (Jazz Chorus) and Mesa Boogie cabinets as well as including BluGuitar’s own Nanocab and Fatcab voicings. These emulations range from single-driver small combos to various 4x10 and 4x12 cabinets and stacks, so there’s a wide range of tonal choice. A second rotary control adds filtering to change the virtual mic position from the centre of the speaker cone to the edge. In its centre position, the filter has no effect; the tonality is brightened as you move towards Centre and becomes less bright as you move towards Edge.

So far so good, but what does the BluBox actually sound like? The short answer is that it sounds extremely authentic, and because it offers 16 different cabinet emulations, each with a variable mic position, you can use it to coax a number of different characters from one amp. It also works well in processing the output of a pedalboard or stand-alone guitar preamp for recording. For overdriven rock sounds, the high end cuts through as it should, without any fizzy overtones, while for cleaner sounds the character of the emulated speaker still manages to sound natural.

I tested the BluBox fed straight from a pedalboard, and also patched between a 5W valve amp and its speaker. In both cases I managed to capture extremely usable tones, and the small amp really benefited from having a choice of different cabinet types — so much so that I found myself doing too much playing and not enough writing! Adding a stack emulation, for example, can make a small combo sound very big and powerful, and to me the results sounded way better than anything I’ve yet achieved using purely in-the-box amp modelling. While many DAWs include convolution-based speaker emulation plug-ins, the BluBox has the advantage that it can be hooked up to the speaker output of a real amplifier, so while it’s an obvious candidate for on-stage use, it should also find a home in many studios.

As with all DI solutions, unless your amp includes reverb, the DI’d result can sound rather dry — but add a hint of artificial reverb and/or delay and the whole thing comes to life.

All in all, then, the BluBox is a very impressive piece of equipment: it does exactly as claimed with no fuss, no unnecessary complexity and without taking up excessive space, and it’s one of the few DI solutions that I’d be happy to use as an alternative to miking the amp.

Other than in software or on sophisticated modelling amplifiers such as the Atomic Amps Amplifire, pretty much all the speaker emulators I’ve used previously have been analogue. Examples include the Hughes & Kettner Red Box and Palmer’s speaker simulator, or, if you also need a dummy load, the Sequis Motherload and the Groove Tubes SE.

This is one speaker emulator that really lives up to its claims, offering not only a viable alternative to miking but also the ability to hear your amp through different virtual speaker cabinets.