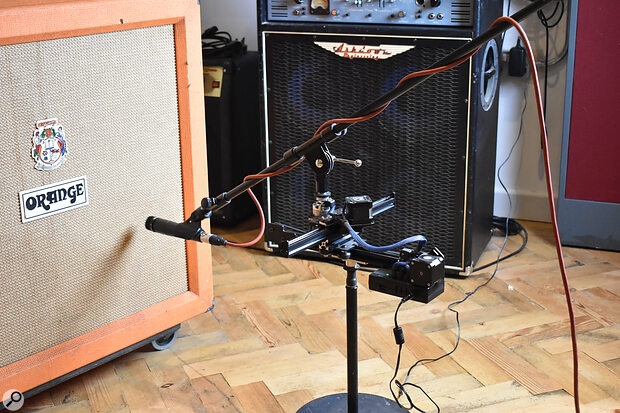 Tired of running back and forth between the control room and live room? Meet your new robotic assistant...

DynaMount are a family business, run by brothers Jon and Mike Russo and based in San Diego, California. The company started life in the early 2010s and soon gained some heavyweight customers, including producer/engineer Joe Barresi and guitarist Pete Thorn. Initially self‑funded, a Kickstarter campaign in 2015 boosted their plans to develop a remote‑controlled microphone placement device for commercial release and, by March 2015, their Gen 1 Axial range went into full production, with four models offering single‑ and dual‑axis movement, controlled over your choice of Wi‑Fi or USB using a desktop or mobile app. The X1‑R and V1‑R models also offered full 360‑degree mic rotation. Towards the end of 2020 the brothers released updated Gen 2 versions of the V and X models; reviewed here is the X2‑R.

The new designs work on broadly the same principles as the earlier models, as you might expect, but they have a smaller footprint and support wired Ethernet remote control in addition to the originals’ Wi‑Fi and USB. Movement can also now be assigned to third‑party USB controllers (eg. game joypads). The robots themselves are acoustically quieter and offer finer adjustment than the Gen 1 models. Also, all of the Gen 2 robots can be fitted with an optional Z‑Axis attachment, bringing four inches of vertical movement to the party, and a Capsule‑Lock accessory, which makes it possible to rotate the mic’s capsule around a fixed point.

On receiving the review unit, I installed the remote‑control app on my iPhone as well as on the studio’s desktop computer, and created a DynaMount account so I was confident that I would be ready to go. The following day, I set everything up shortly before a client arrived at the studio, and this was trivially easy to do. A multicoloured LED on the power unit indicates its connection status, and it’s definitely a good idea to have the LED Colour Code guide to hand, so you can decipher the colours and adjust the settings as required. Using the phone app, it was easy to input the studio’s Wi‑Fi credentials and, after successfully establishing a connection, the machine ran through an automatic calibration procedure; it was soon ready to use. 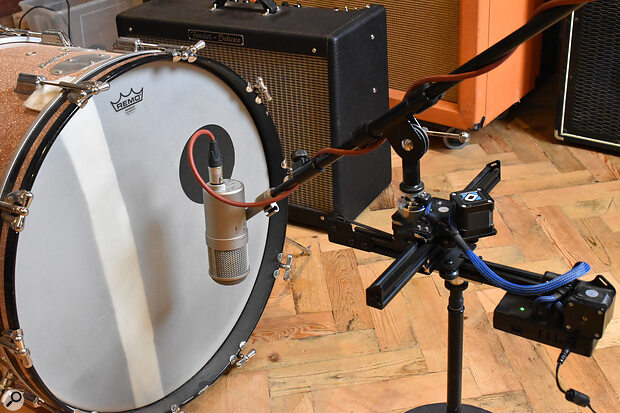 It was little surprise to find that the X2‑R worked well with an SM57 on a guitar cab, but it can also handle larger, heavier mics.

During that day’s session I would be tracking electric guitars — a very familiar job for me and a classic application for a mic robot, so it promised to be a great way for me to get a feel for how well the X2‑R works in practice. The X2‑R attaches to a mic stand, so I secured it on a small boom stand in front of my Orange 4x12 cabinet. Typically I’ll use two mics on a guitar cab but, deliberately keeping things simple while I put the robot through its paces, I mounted only a single Shure SM57 on the robot.

I have miked many amps over the years and am always confident that I can get a decent sound when placing a mic manually. Using the X2‑R is a very different experience from that — and a very pleasing one. Instantly, I appreciated that, because I no longer needed to be where the microphone was while I placed it, I could simply use my ears and make many fine adjustments without constantly having to scurry between the control room and the live room. That encouraged me to experiment rather more, moving the mic into positions that I would never normally take the time to explore.

It might sound a simple thing and in theory it is, but in practice it was a revelation. On this session, the guitarist was able to sit next to me behind the control room’s console and play through the track, and we could both listen and exchange opinions until we settled on the sound that we both agreed ‘fitted’. And because fine‑tuning the placement was so easy and the results were immediately audible, we found that sound using the single SM57; we didn’t feel the need to try my usual dual‑mic technique. What’s more, it’s possible to save different positions as presets, and that meant we could give ourselves permission to be more adventurous in search of different guitar sounds — we always knew that the push of a button could return us to a previously liked or ‘safe’ position.

The unit worked equally well with the app on my phone and on the desktop computer, and while I didn’t get the chance to test it with any third‑party controllers, that functionality should only increase the appeal. Indeed, the only real ‘issue’ I encountered during the review period was that, with the power cable, XLR and Ethernet cable attached, I found that I had to take care to avoid the cables sometimes tangling or occasionally getting snagged. A small ‘umbilical’ could be a neat way to manage this, and the smaller X2‑R Micro (which is pretty much the same but with a smaller footprint and smaller range of motion) can already be powered and controlled over a single Cat 6 cable.

The X2‑R proved to be every bit as reliable as I’d hoped it would be.

While any technology that allows adjustment of sounds quickly and easily, particularly one that allows you to listen to your changes while in a controlled listening space, has my backing in principle, I can be a little suspicious of new technology in the studio. Why? Well, however clever it may be in theory it also has to be ultra reliable; everything has to work seamlessly and not cause delays during busy sessions. If anything doesn’t work, then I will quickly make the decision to sideline it so that I can keep the session moving.

Happily, the X2‑R proved to be every bit as reliable as I’d hoped it would be. I also enjoyed using it and found it pushed my creativity and challenged my concept of what ‘correct’ mic placement is. This was a new experience for me, so it inevitably felt a little slow and alien at first, but I soon grew used to working this way, and am sure it would quickly become a seamless part of my workflow if I were to use it regularly. It’s also worth stressing that the Russo brothers’ aerospace background really shines through in these designs: the X2‑R review unit felt light, yet very robust and solidly constructed. Watching it move in the live room, through the control room window, put me in mind of a lunar rover or a bomb‑disposal robot performing their delicate manoeuvres!

This product both achieves its objective and works well, then. It’s easy to set up and to operate, and it could become a real workhorse during studio sessions. The ability to use third‑party controllers is a really neat touch, and add‑ons such as the Z‑Axis and Capsule‑Lock further enhance the possibilities. While I’ve focused mainly on guitar cabs here, I did of course try it on various other sources, including drums, and with bigger, heavier mics too — and it was just as useful. In fact, I think that remotely adjustable mic positioners such as this could have applications all over the studio, for the recording, broadcast and even live‑sound industries, and some readers might also be interested in DynaMount’s custom design/build service to create robots that are tailored to meet specific needs.

DynaMount are definitely ahead of the curve here, and seem to have vision, practical expertise and an eye for detail too. The future looks bright!

The idea of a mic robot might not be a new one but before DynaMount came along, such devices were mostly DIY or custom‑built affairs. To my knowledge, only one other company, ShroomTech, has made a mic robot available commercially — we reviewed their NC Microphone Controller back in 2017 — but they appear to have disappeared since then. It adopted a similar approach, with stepper‑motors moving the mic along different axes, but used a dedicated joystick remote, with none of the app or third‑party controller support of the DynaMount devices.

A very nicely designed and executed machine with slick remote‑control options. It may not top every engineer’s wish list but this robot could save time for tone hunters who continually run back and forth nudging mics, as well as encouraging much more creativity in your mic placement.