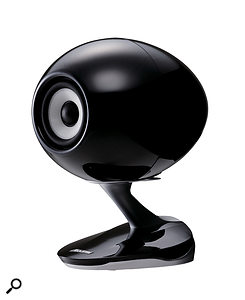 Single-driver speakers have long been popular in the studio, and now Eclipse have brought the concept into the 21st Century with a Wi-Fi enabled model.

Japanese manufacturers Fujitsu Ten are probably not familiar to most readers, but the company were formed in 1972 and can trace their industrial roots right back to the formation, in 1920, of the Kawanishi Machine Works, which built consumer radios. Most of the company’s products have centred on in-car audio and other electronic systems for the automotive industry, but the subject of this review is an unusual and interesting single-driver desktop monitoring system, the TD-M1, sold under Fujitsu Ten’s Eclipse brand.

Single-driver loudspeakers have several advantages. The absence of a crossover and multiple drivers allows them to project a very smooth and natural mid-range, free from any crossover response anomalies, phase shifts and dispersion changes. With just a single driver, the cabinet baffle can also be greatly reduced in size, resulting in more precise and stable stereo imaging as the entire sound field is generated from something more closely approximating the ideal point source.

However, there are some down sides too, of course, the most obvious being a reduced bandwidth, as a single driver will inevitably be too small to deliver powerful, extended bass, and possibly also too big to produce very high frequencies with a wide HF dispersion.

One of the most popular single-speaker studio references through the ‘70s and ‘80s was the Auratone 5C, and there are plenty of modern single-driver speakers based on a similar ‘compact cube’ design around today. However, the Eclipse TD-M1 employs a far more sophisticated design strategy and incorporates some ingenious technology, all of which is essentially focused on optimising the impulse response with the aim of reproducing as natural and accurate a sound stage as possible.

The TD-M1 is very compact, measuring 155 x 242 x 219mm (WHD), and features a light and rigid 80mm cone loudspeaker. This is driven over a large excursion range by an oversized motor assembly to ensure fast and precise movements with a good dynamic range and reasonably high SPL capability for such a tiny system. Newton’s Third Law of Motion means that the cabinet tries to move in the opposite direction to the speaker cone, which would degrade the impulse response. To counteract this tendency, the TD-M1 ‘grounds’ the driver with an internal ‘anchor’, in essence a heavy metal mass attached directly to the rear of the driver chassis. This whole speaker assembly is then arranged to ‘float’ inside the cabinet from a metal ring which is suspended within the cabinet from five radial isolating pillars. This unusual arrangement means that the driver is not actually bolted to the cabinet’s front baffle at all, although the clever construction maintains an airtight compression seal around the front of the driver chassis.

Equally unusual is the egg-shaped cabinet itself, which is made from an inert resin material with a rear-firing port. The shape not only inhibits internal reflections and resonances, but also minimises external diffraction. The integral stand is just as novel, using a three-point support arrangement as part of its integral vibration damping, while a clamp lever underneath allows the cabinet to be tilted at any of three distinct angles: horizontal, +10, or +20 degrees. There is no downward tilt option because these speakers are primarily designed for use on a desktop rather than a shelf.

The review system looked very elegant, with its stylish piano-black gloss cabinet and base separated by an angled metal stand bracket in satin silver. The little speaker has a large roll-rubber surround on the outer edge, visually balanced with a black domed centre cap (which improves the HF dispersion). The visible cone area is a grey fibreglass material, and the removable protective grille is held securely in place by hidden magnets.

The TD-M1 is a powered system with all the electronics housed inside the right channel’s base unit, which weighs around 2.8kg. The entirely passive left-hand speaker is a little lighter at 2.6kg, and is connected via a 3.5mm TRS plug on a 1.5m lead attached to the right-hand unit. This fixed-length cable obviously restricts the maximum spacing between speakers, but is adequate for typical desktop use.

Power is provided to the system via a coaxial plug from a (grounded) external universal PSU line-lump, delivering 20V DC at 3.5 amps. The system amplifiers are rated at 25W maximum output per channel, with 0.08 percent THD at 10W, and the manufacturer’s specifications claim a response from 70Hz to 30kHz (no tolerances or limits are given). System power consumption is 10W, falling to 0.5W on full standby. 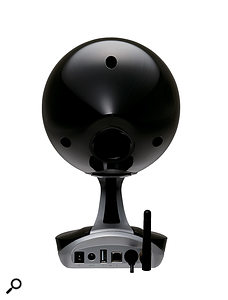 The right-hand speaker, which houses the amplifiers for both speakers, also provides the audio connectivity, in the form of USB (type A and B) sockets, a mini-jack input, and a Wi-Fi receiver.

Audio source options comprise a 3.5mm TRS socket for an unbalanced analogue stereo source such as the headphone socket of a smartphone, plus two USB ports and built-in Wi-Fi. An A-type USB socket allows direct connection of a portable music player, while a B-type socket suits connection to a Mac computer or PC (a dedicated USB driver is required for the latter). When hooked up to a computer the system supports sample rates up to 192kHz.

The Wi-Fi facility employs an aerial screwed onto the rear and works with standard 802.11 b and g networks, with support for AirPlay for Mac and iOS systems, or Android sources, and either via a router or in direct 1:1 connection modes. A dedicated app called ‘TD Remote’ is required for iOS and Android sources, and this also allows access to the TD-M1’s network settings and for firmware updates. Supported audio file formats over Wi-Fi are WAV, FLAC, MP3, WMA and AAC and ALAC, with sample rates up to 48kHz.

A touch-sensitive panel on the base of the right-hand unit provides the User controls, with a volume ‘slider’ supplemented with volume up/down button areas at each end, plus a power on-off button which doubles up as the input source selector. Seven white LEDs across the front of the base unit indicate the current volume setting whenever the volume is adjusted, or the selected input source when that is changed. Repeated pressing of the power button cycles through the Wi-Fi, USB-B, USB-A and Aux options.

After a short period of inactivity, only the centre LED in the array remains illuminated, with its colour indicating the system’s status. Red indicates the full standby condition, while orange is for network standby (in which the network port is active, ready to play any audio received over Wi-Fi). Blue indicates the active Wi-Fi router mode, green for active 1:1 Wi-Fi or Aux modes, and flashing red, orange, or white LEDs indicate various error conditions. The system has an auto-power-off function which cuts power after 30 minutes of silent inactivity.

I set the TD-M1s up on my office desk and was immediately impressed with the wide, deep, precise and very stable sound stage. I almost felt as if I could reach out and touch the voices and instruments laid out before me — they were that three-dimensional and solid. Vocals were uncannily lifelike, which is a benefit of the phase and transient accuracy afforded by a single-driver speaker. Transient-rich material is portrayed with convincing exactitude too — everything starts and stops precisely, and small timing variations in performances are made obvious and unambiguous. I often find with larger multi-driver speakers that these kinds of timing subtleties are often lost and smeared.

Given how compact these little loudspeakers are, I was surprised how loud they can play too — more than loud enough for nearfield desktop use — although they can get a bit edgy-sounding when pushed hard. At sensible listening levels the mid-range is wonderfully transparent and detailed, with an ability to reveal inner mix details that is similar to really good headphones. Pleasingly, or exasperatingly, (depending on your perspective!) I noticed when playing some tracks from a smartphone that the inherent sonic flaws of low-rate MP3s are made quite obvious.

The high end is also very smooth and well extended, with surprisingly wide dispersion, and for such compact cabinets the low end does a reasonable job delivering usable sound down to below 70Hz. However, it does have a slightly overblown and woolly character, and while classical, acoustic and jazz lovers will probably enjoy the TD-M1s’ presentation, heavy rockers and EDM fans will inevitably find the low end performance limited.

Controlling the system is very straightforward once familiar with the base unit’s touch controls, and the associated app (I used the Android version) works well. I had some difficulty connecting the system to my own office network (which, to be fair, is a non-standard configuration), but managed it very easily on a friend’s Mac-based system.

The TD-M1 looks very elegant and sleek, and sounds impressive — especially across the mid range. Its real star quality, though, is its ability to create astoundingly 3D stereo images. The range of input sources and computer connectivity make it very easy to integrate the TD-M1s in office or domestic environments, and I found these speakers very useful as secondary monitors for judging the mid-range balance and sound staging. In fact I found myself using them in situations when I would normally have been reaching for the headphones.

If the limited bass isn’t an issue, the only remaining obstacle is the price, which does seem high for such a compact and ostensibly simple pair of speakers. Having said that, I can think of several equally expensive active monitors that don’t come anywhere close to being as revealing through the mid-range, or able to present such impressive 3D imaging.

I’m not aware of anything that has the same kind of connectivity options in an active single-driver format.