Electro-Harmonix tell me that the Key9 completes the trilogy that started with the B9 and C9 Organ Machines — though I hope the line doesn’t end there, as I think there’s scope to build a string-machine emulator based on the same technology! Like its predecessors, the Key9 takes in a monophonic or polyphonic signal from a standard electric guitar, processes the waveforms that come from the pickups, and delivers a remodelled sound, in this case emulating electric pianos and related tuned percussion. 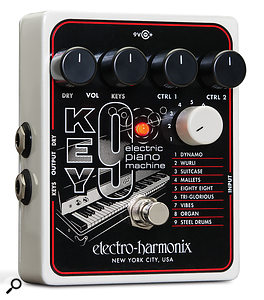 The hardware is essentially the same as for the B9 and C9, with separate dry and effected outputs, and a bundled power adaptor. There’s a choice of nine presets that can be modified using a couple of knobs, and many of the tonal modifications include effects of the type that might normally be used with a keyboard, such as tremolo, phaser and chorus. There are separate volume knobs for the dry and keyboard sounds, two control knobs that vary in function according to the preset chosen, a nine-way selector switch and a (buffered) bypass foot switch with status LED. That’s it, so now on to a description of the sounds on offer.

Preset 1, Dynamo, is designed to evoke the spirit of a modified ’70s/’80s Fender Rhodes, for which Ctrl 1 adds bass and Ctrl 2 adjusts the tine sound (that bell-like tone at the attack of the note). Preset 2 rekindles another electric piano classic, the Wurlitzer, with Ctrl 1 adjusting the tremolo depth and Ctrl 2 the speed. With Preset 3 we’re back to the Fender Rhodes, this time played through a phaser. Ctrl 1 adds a bass octave while simultaneously tweaking the tine overtones, and Ctrl 2 determines the phaser speed.

Preset 4, Mallets, takes us away from electric pianos, albeit briefly, to emulate the sound of a wood marimba — Ctrl 1 adjusts chorus depth and Ctrl 2 the speed. We’re back to pianos with Preset 5, conjuring the soul of a Fender Rhodes 88 electric piano, this time with tremolo (Ctrl 1 adjusts depth and Ctrl 2 speed). Next up is Tri-Glorious, based on the sound of a Dytronics/Dyno My CS-5 Tri Stereo Chorus, and the two control knobs adjust depth and rate. Then we switch to Vibes, for which Ctrl 1 adjusts the timbre of the attack and Ctrl 2 the tremolo rate.

Preset 8 is an Organ, presumably for the benefit of those who don’t have a B9 or C9. It’s quite touch-responsive, and is treated with a rotary speaker effect, with Ctrl 1 adjusting treble and Ctrl 2 the mod speed. Finally, Preset 9 is steel drums with chorus. While this isn’t something I’d use a lot, it certainly conjures up a Caribbean vibe! Ctrl 1 adjusts the mod depth and Ctrl 2 the speed.

As with the other pedals in the range, the Key9 works best as either the first pedal in the chain or the second, following a compressor. The guitar’s volume needs to be turned right up and the treble pickup usually gives the best results. Feeding the Key9’s output to a clean keyboard, acoustic guitar or PA amp sounds best, though you can use just one output to feed a mix of the dry and effected sounds through your guitar amplifier.

Electric pianos and guitars have a surprising amount in common, so the main contribution of the emulations appears to be added octaves, timbral tweaking and a synthesised note attack, including adding the tine components of a Fender Rhodes. The decay of an electric piano and guitar are very similar, so if you play the guitar as normal, you might think you’re hearing little more than an effected guitar sound. But play in a more piano-like way and the results can be surprisingly convincing, particularly with the Rhodes and Wurli presets. The Tri-Glorious setting comes over as a massively chorused guitar sound, while the marimba and steel drums are pretty convincing — as long as you’re not just strumming chords and hoping for the best! Being a regular B9 user, I’ve been spoilt, and thus wasn’t knocked out by the Key9’s organ preset, but it could work if you want a more percussive sound.

The Key9 achieves what it sets out to, and in a very guitar-friendly way — there are none of the tracking issues associated with conventional guitar synths. It’s down to you to approach the performance the way a piano player might, in order to produce a convincing result, and that means no string bends or whammy manoeuvres during the piano sections!