With its tweakable tones, could this be the ideal studio guitar amp? 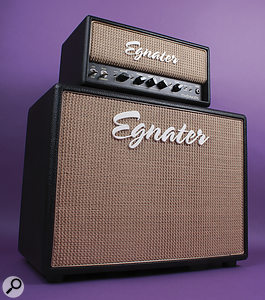 While modelled guitar amps, both hardware and software, have come a long way since their introduction, you still can't beat the experience of playing through a really good valve amplifier. There are several small amplifiers, well suited to studio use, that allow you to get a big sound at a modest volume — but most offer a limited range of tonalities. Not so the Egnater Tweaker, as in addition to the usual gain, master and EQ controls, it has five 'personality' switches, plus a series effects loop, allowing it to cover a very wide range of tonal ground.

Bruce Egnater is well known in the US as a boutique amp builder, but he's now created quite a buzz in the mainstream marketplace, having had some of his designs built in China — the Tweaker being one of them. The result is a beautifully styled, solidly built little 15W tube amp head (a combo version is also available) that is surprisingly affordable, and which sounds good at both modest studio levels and when played live at smaller venues. I tested the Tweaker with its optional 1 x12 speaker cabinet, which has the same black vinyl finish, and woven 'basketwork' grille.

Built with the same vinyl‑covered wooden sleeve and steel chassis construction as a larger amp head, the Tweaker uses printed circuit boards rather than point‑to‑point wiring, but the standard of construction is extremely high. The valve line-up comprises three ECC83s (12AX7s) and a push‑pull pair of 6V6 output valves, and the speaker output can be switched to 4Ω, 8Ω or 16Ω to accommodate alternative or additional speaker cabinets. 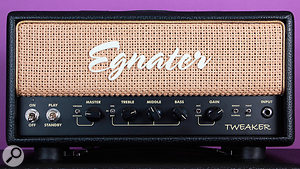 A dedicated cabinet in matching vinyl finish is available for the Tweaker. In essence, the Tweaker is a single-channel amplifier with bass, middle and treble tone controls, and a gain knob to set how much preamp drive is used. At higher settings of the master control, the output stage starts to saturate, and eventually the power‑stage distortion dominates the tonality, but at lower levels, various flavours of preamp character really shine through.

So, what about those 'personality' switches? First, there's the Vintage/Modern switch, which gives a choice of either a flat or slightly 'scooped' power‑amp sound. Next up is a three‑way toggle that modifies the EQ stack to give a typical 'US', 'UK' or 'AC' sound which, as I interpret it, means Fender, Marshall or Vox. Alongside the gain knob is the hot/clean switch, which dials in some useful extra gain to get you into classic rock territory. This is followed by bright/normal and tight/deep switches, the latter affecting the low end of the signal feeding into the preamp.

One feature I found a little curious was the front‑panel layout, which was the exact mirror image of what I'd normally expect, with the input and preamp gain controls on the right and the master volume on the left. The EQ controls also start with the high at the left-hand side. None of this is really a problem, of course, but like most people, I tend to think of signal flow as going from left to right! 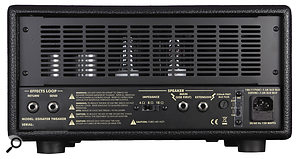 The Tweaker head has a switchable output impedance, for use with different speakers, and there's a line-level effects loop too.I know that I'm not alone in wishing the Tweaker had a footswitch to bring in the extra gain, though in the studio it's easy enough to record the cleaner parts and the overdriven parts separately. When playing live, I found that this amp responded well to a good gain boost or overdrive pedal. I'd have been happy to pay a little more for a model with a nice spring reverb (or even a digital emulation), but again you can use the effects loop when playing live, and there are always plug‑ins when working in the studio.

The best feature of this amplifier is something simple: it sounds great at studio‑friendly levels. Indeed, the various controls and switches have more effect at low‑to‑medium level, before the power tubes really start to saturate. In the clean mode, the amp has the clear‑but‑springy character of a really nice tube amp, and there's little break‑up until the gain control approaches its maximum setting, at which point the sound takes on a convincing bluesy crunch. Switching to hot mode adds extra gain, so that the gain control goes from almost clean to '60s and '70s rock overdrive, even with low output single-coil pickups. Very sweet.

Another welcome surprise is the three‑way tone-stack switch, and although it doesn't purport to nail exactly the sounds of the three amp types suggested, it gets uncannily close when you consider that only the tone stack is being changed. The 'US' sound has the familiar snappy, well‑focused character, while the 'AC' setting gets very close to the classic 'soft focus' Vox sound with its characteristic jangly highs and throaty lows, despite the output stage not being Class A. 'UK' brings on a more dense sound that hints at a Marshall tonality and is well suited to classic rock. 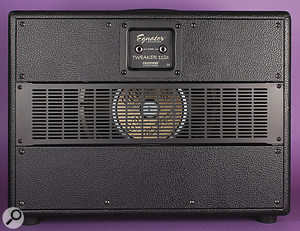 The rear of the optional speaker cabinet.Depending on the character of your guitar, you can use the amp in normal or bright mode, though I have to admit I preferred to leave the bright switch on and then use the EQ. The power amp Vintage/Modern switch also affects the overall tonality, as does the Tight/Deep switch, so there's plenty of scope for tailoring the sound both to your taste and to your guitar.

On the techie side, the amp is pretty quiet for a valve design, and the effects loop level works fine with rack units and most pedals, though if you have a particularly hot guitar and play hard, some lesser pedals might get pushed beyond their comfort zone. I tested it with a TC Nova and it worked perfectly. Life is also simple when you come to change the output tubes, as the circuit uses a self‑biasing, cathode‑bias topography, which means you simply drop in a new pair of tubes and carry on playing.

Given its boutique sound and tonal flexibility, the Egnater Tweaker has to come close to being the ultimate studio amplifier. For live use, a good overdrive pedal will make up for the lack of a gain footswitch, and you can add effects either via the effects loop or at the mixing stage. The basic sound is excellent, and those three EQ choices really do change the amp's character, to the extent that it's just like having three different amplifiers. What's more, it costs less than some amp modelling plug‑ins!

There are plenty of small valve guitar amps from the likes of Fender and Epiphone, but there are rather fewer that offer you this degree of tonal flexibility: you'd probably need to choose a modelling amp or a hybrid design (such as the Vox VT series), but if all‑valve is your thing, the nearest equivalents are compact, low-power amps such as the Vox Night Train or the Orange Tiny Terror. Higher in price, you might look at something like the Mesa Transatlantic, or the Fender Princeton recording amp — if you like that particular sound.

The Tweaker is a great‑sounding, very affordable little amplifier capable of covering most classic guitar tones. It sounds good at relatively low volume levels, but can also go pretty loud when you crank it up, so would be useful for smaller pub gigs or gigs where it would be miked.