Instead of cutting corners, Swedish company Ehrlund have added them, by basing their microphone around an unusual triangular diaphragm. 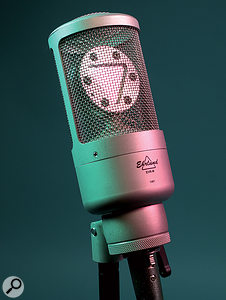 Sweden is unique among the Scandinavian countries in having several high‑end microphone manufacturers. Perhaps it's something peculiarly unique to the Swedish psyche, but all of these microphone manufactures disregard the well‑known circular‑capsule design ethos, instead preferring much more interesting and bizarre forms!

For example, both Pearl and Milab are well known for their penchant for rectangular‑diaphragm capsules, while Line Audio Design likes to package three small‑diaphragm capsules together to form a single compound large‑diaphragm capsule. On the other hand, Ehrlund have decided that the triangle is a much better shape for a microphone diaphragm, and they make a range of contact bugs and capacitor microphones with very strange‑looking triangular capsules!

The technical arguments for each of these non‑standard approaches essentially revolve around mitigating the resonances inherent in a stretched diaphragm. This issue is related to the size of the diaphragm, because the larger it is, the lower and more problematic its resonant frequency will be. Line Audio Design's solution to this problem is to combine the electrical outputs of three close‑mounted, small‑diaphragm capsules. This approach is claimed to retain the fast transient response and ultrasonic‑resonance benefits associated with the small‑diaphragm capsule, while also offering the low‑noise performance associated with a large-diaphragm capsule.

Pearl's and Milab's rectangular capsules have two primary resonant frequencies instead of one, thanks to the different length and width dimensions. This approach is claimed to reduce the overall strength of the resonances, as well as combining many of the benefits associated with both large- and small‑diaphragm capsules. Ehrlund's unique triangular diaphragm is also all about minimising resonances and controlling vibration modes, so that it too enjoys these benefits.

While Göran Ehrlund was running his recording studio in the 1980s, he was also experimenting with his own contact pickup designs, and he had the idea of using a triangular contact shape — fundamentally because he thought this would minimise unwanted resonances. The outcome was encouraging, and the resulting EAP pickup has become quite popular among acoustic guitarists, violinists, double-bass players, and many more.

Building on the success of his triangular contact bug, Ehrlund's customers asked him to apply the same thinking to a studio capacitor microphone, and the EHR-M, reviewed here, is the current Ehrlund flagship model. The basic design of the triangular capsule is not that dissimilar to a conventional large‑diaphragm microphone, and Ehrlund's patent application (published in 2008) reveals the concept very well. The patent's primary claim is that it "solve[s] the problems with non‑linear frequency response for condenser microphones”, which is a reference to the way in which it controls the diaphragm resonances to ensure the most even frequency response.

The capsule assembly is quite conventional in many ways, and starts with a circular aluminium diaphragm — presumably because that's easier to make and tension than a triangular one. However, the front mounting ring (which also provides the edge‑terminated connection) has a triangular opening, and this is matched by a drilled and gold‑plated back electrode. The two work in combination to establish a triangular active working area in the diaphragm. An insulating ring between the backplate assembly and the diaphragm ensures a precise spacing of around 0.05mm. 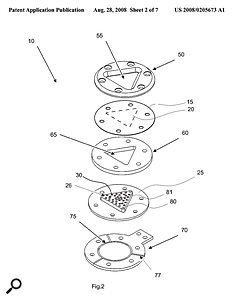 This diagram from Ehrlund's US patent application shows how the diaphragm starts off circular, but then has its working area limited to a smaller triangle shape.

The EHR-M dual‑diaphragm, fixed‑cardioid microphone is a development of the original EHR1 valve microphone, incorporating the latest iteration of Ehrlund's capsule design and new transformerless electronics. There is also a broadcast‑orientated sibling, the EHR-B, which is identical to the EHR-M in every respect except that it incorporates a fixed 80Hz high‑pass filter. The design, manufacturing and assembly of Ehrlund's microphones are all done entirely in Sweden, including the simple but attractive plywood presentation box. The microphone is supported inside with two curved ribs, and cosseted in a custom felt bag.

Even before you spot the unique capsule design inside the grille, the microphone's overall styling has quite a distinctive look. Most of the microphone's bulk is given over to an unusually large area of nickel‑plated steel‑mesh grille around and above the capsule. This grille appears to be a single‑layer type with a very open weave, and its design goal is to minimise internal sound reflections that would otherwise cause colorations. In physical terms, the microphone measures 155mm long, with a diameter of 60mm, and it weighs 380g — so it is considerably lighter than it looks.

The squat aluminium body of the EHR-M has a matte‑silver finish, and the nicely engineered, solid aluminium stand-mount supplied with the mic is secured around the neck housing the XLR connector by a large threaded ring. Interestingly, the diameter and thread pitch of this neck is identical to Neumann's TLM 103, TLM 127, and TLM 193 mics, and so the EHR-M will fit Neumann's EA2 and EA4 elastic shockmounts, or their equivalents. I mention this because although the capsule is supported internally on a rubber isolation mount, I found that it was beneficial to use some additional external vibration isolation. In fact, I used a Rycote inVision Studio shockmount for most of my testing.

The microphone's sensitivity is quite high, at 23mV/Pa, and it has an impressively low self‑noise figure of 7dBA — which is on a par with the best solid‑state large-diaphragm microphones available today. The published specifications also claim that the EHR-M can cope with 135dBA sound pressure level (at 0.5 percent THD). The solid‑state impedance‑converter electronics employ a transformerless design, and require standard 48V phantom power with a very low current requirement of just 1.6mA.

The frequency response is well controlled through the low end and lower mid-range, with a relatively modest proximity effect, and possibly a very slightly subdued upper mid‑range region. However, this subtle tonal characteristic is completely overshadowed by a broad presence boost rising to about +4dB from 2kHz, and continuing all the way up — it is still at +2dB at 20kHz. Not surprisingly, this gives the microphone a noticeably bright and airy sound, with crisp transients and the impression of a wealth of un‑hyped detail. The off-axis response reveals a tendency towards a hypercardioid pattern at high frequencies (above about 5kHz), which is quite common in large‑diaphragm mics, but the EHR-M's nominally cardioid polar response actually has very consistent tonality over almost ±60 degrees. The bottom end also sounds less 'phasey' than some fixed‑pattern cardioids I've used, and while it's not as natural‑sounding as a true omnidirectional microphone, it is very good — so Erhlund's hard work on the capsule design to achieve this degree of phase coherency has paid off!

I was supplied with a pair of EHR-M microphones for this review, and I used them as individual microphones and together as a stereo pair. As I mentioned earlier, the first impression on hearing the EHR-M is that it has a distinctly bright and open sound character. However, unlike that of some large‑diaphragm capacitor microphones, the extreme high end sounds very natural, without any hint of resonant harshness or that subtle coloration associated with a subdued resonance. The fast and clean transient response, without any audible tendency to ring, adds to the gentle emphasis of upper mid‑range detail. It works particularly well on percussive instruments such as acoustic guitars, drums and hand percussion, drawing the detail out gently without it becoming aggressive.

When the EHR-M was used to close‑mic a baby grand piano, the transient detail was nicely balanced by the solid and well‑extended bottom end, but because the proximity boost is fairly modest, the sound didn't become muddy or suffer too much high‑bass 'bloom'.

The mic's very broad and relatively flat‑topped presence boost sounds more like a gentle HF EQ shelf than the typical peaky 'high‑Q' response found in many large diaphragm mics. The result is that the EHR-M is perceived as having a very transparent sound character, but it also sounds very natural and 'relaxed', rather than having that slightly artificially controlled quality that afflicts the high end of many large‑diaphragm mics. As a vocal mic, I found that the EHR-M could sometimes draw more attention to mechanical mouth noises (lip smacks and so on) than some more tonally subdued mics, but it also gave a lovely airy quality that often worked well and reduced the need for the same kind of EQ tweaking in a mix. Interestingly, sibilance was rarely a problem, because, I suspect that when it did occur, it sounded more natural than it often does. Plosive blasts proved to be far less of an issue than I was expecting, too. I'd still recommend using a good pop screen for close vocal work, but the microphone's mesh grille turned out to be surprisingly effective.

Before I rigged the two mics as a stereo pair, I performed my usual quick matching test. Briefly, this involves rigging the two mics above one another to face in the same direction, and panning them individually hard left and right on the monitoring. With the help of an attractive assistant walking and talking in a circle around the mics, I listened for image shifts that would reveal any frequency and polar response differences. I'm pleased to say that the mics proved to be very closely matched.

When the EHR-Ms were rigged as an ORTF stereo pair, I was impressed with the sense of space that the array captured, as well as the very stable and well‑proportioned stereo image. In this situation, with the inherently greater distance between sound sources and microphones, the enhanced high‑end response was actually very helpful in maintaining the enticing impression of detail, presence and clarity, as well as lending an airy, open and transparent character to the recording.

The Ehrlund EHR-M is an impressive beast, both in terms of its build quality and its open and natural sound through the top octaves. The only minor disappointments were in the lack of technical information supplied with the mics and the omission of a decent shockmount, which I think really should be included with a microphone of this calibre and cost. It seems that there might well be something in this triangular diaphragm concept, as there are few large‑diaphragm microphones that sound quite as natural and unfettered at the top end as the EHR-M. The technical aspects of the mic's performance are very closely matched with such versatile models as Neumann's TLM103 and AKG's C414 XLS, amongst several others, but the sound quality is sufficiently distinctive to warrant giving the EHR-M its own place in the store cupboard.

The EHR-M competes on price with such high‑end classic microphones as Neumann's TLM67, Gefell's UMT70S, Peluso's 2247SE, Telefunken's AR51 and the less orthodox JZ Black Hole, but it sounds quite different to these models, with its much brighter, more open high end. For a different kind of sound quality, the SE Electronics RNR1 is available at a similar price, and so too are matched pairs of Coles 4038s, Neumann TLM103s and AKG C414 XLS microphones.

A very well‑built, high‑end capacitor microphone with an unusual capsule design that seems to endow it with an impressively smooth and detailed high end.