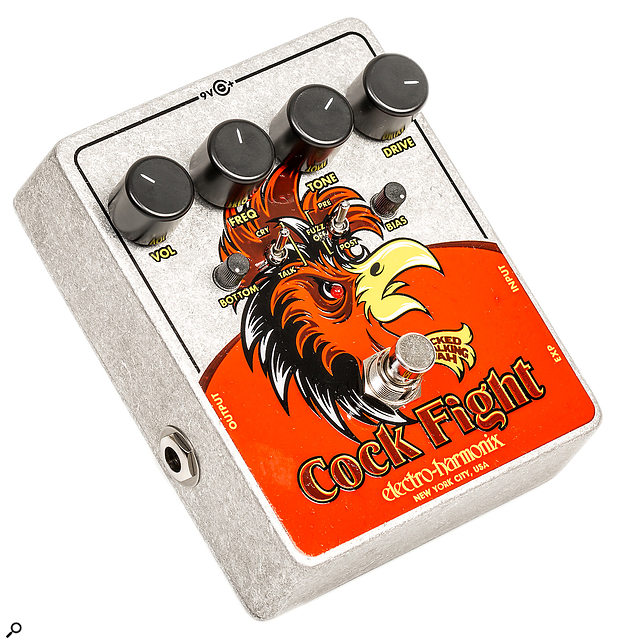 Electro Harmonix always manage to come up with a new twist when developing new pedals, and their Cock Fight combines filtering with fuzz. One of the filter modes (Cry) emulates a typical wah-wah pedal, with a frequency knob allowing it to be ‘parked’ at any desired point in the sweep, but an optional expression pedal can be connected to animate the filter in the traditional wah-pedal manner. The other filter mode (Talk) imposes vowel-like formants on the sound, so it’s possible to create ’talking’ guitar effects by sweeping with an external pedal, or you can again park the control to produce a static filter effect. A small switch toggles between the two filter options.

Filters always sound at their most dramatic when processing harmonically rich sounds, so it’s useful that a variable-drive fuzz circuit is included. This can be switched to go before or after the filter section — the result from each setting is sonically quite different. A centre position on the pre-/post-filter toggle switch turns the fuzz off, but I could find no way to bypass the filters if you wanted to use only the fuzz. All three audio connections are on quarter-inch jack sockets, one for the input, one for the output and one for connecting an optional expression pedal.

The main controls are for Volume, (filter) Frequency, Tone and Drive but there are two additional mini knobs, one of which adjusts the amount of low end added into the signal and the other the biasing of the fuzz circuit. With the fuzz bias control turned anticlockwise, the fuzz takes on a dying-battery character (the notes splutter to extinction rather than die away gracefully), but there are some useful variations to be had between the extremes. A footswitch bypasses the pedal when desired, and there’s a socket for the included standard centre-negative 9.6V power supply, but battery operation is also possible (you’ll need a screwdriver to access the battery compartment).

Sonically, the pedal does what you’d expect in Cry mode: you can get close to recreating that ‘Money For Nothing’ honk, or maybe a Cream-era guitar solo. The sound is most focussed with the fuzz placed before the wah, but it’s worth auditioning both positions. In Talk mode, the vowel filter can produce a wide range of usable guitar tones that can be adjusted using the Frequency knob, though adding a pedal to animate the sound is more fun. Ultimately this probably isn’t a pedal you’d use on every song, but using the filters on their own after a more traditional overdrive as an alternative to the inbuilt fuzz can yield plenty of useful sounds that work especially well for soloing or riffing.