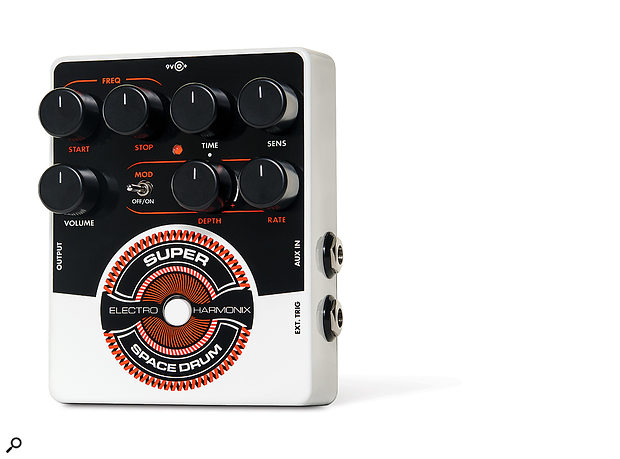 Electro-Harmonix have reintroduced two of their classic ’70s drum synths.

Anyone of a certain age will remember Rose Royce’s single, ‘Love Don’t Live Here Anymore’, one of the key elements of which is an analogue drum synth that produces a sound rather like somebody shooting an owl. Well, if you’re into that kind of sound, the EHX Super Space Drum might tempt you, as it is capable of a wide range of analogue drum sounds that would be right at home in that time period. The current model is actually a reissue using the circuitry of the original 1979 model, and can be triggered from a panel push-button or an optional external drum pad, pickup or contact mic. You might wonder why you’d need one unless you’re a drummer, but the great thing is that in this modern DAW-dominated era, the Super Space Drum provides a practical source of drum sounds that you can sample to build up your own personalised electronic drum kits.

Built into a familiar EHX-style die-cast chassis and powered from the included EHX9.6DC-200mA PSU, both units can also be run from a 9V battery. The Super Space Drum panel is populated by seven rotary controls, a toggle switch to activate the LFO mod section, and a trigger button. The output is mono and on a standard quarter-inch jack. The two Freq Start and Stop knobs set the start and end frequencies of the drum synth’s pitch sweep, while the Time knob sets the rate of the sweep. Sens sets the sensitivity when using an external trigger, which could be as simple as a cheap piezo disc soldered to a jack lead, and of course Volume does just what you’d expect. Input jacks accommodate an external trigger and an external aux signal, which, when connected, is amplitude-modulated by the SSD circuitry in place of the internal oscillator.

A basic sweep sound isn’t always that exciting, but the Mod section makes things more interesting, as its sawtooth oscillator can be set to run at up to 1.5kHz to create FM-style modulation effects, or it can run more slowly to produce frequency modulation down to 10Hz. The Depth control sets the modulation depth and is centre-detented at the zero position. Turning anti-clockwise produces a negative setting, causing the sawtooth modulation waveform to fall rather than rise, as it does when the knob is turned clockwise.

The trigger input works from positive-going pulses or clock signals, which EHX specify as 3V to 15V for unipolar signals or ±3V to ±8V for bipolar signals, in order to accommodate a wide range of triggering devices such as drum-machine trigger outs or the EHX Clockworks. Note that triggering is via analogue signals only — there’s no MIDI trigger option. 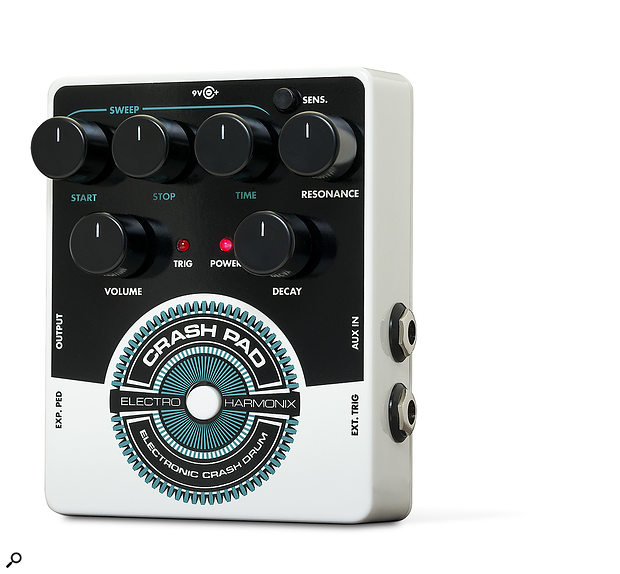 The Crash Pad follows a similar format except that it uses white noise as a sound source rather than an oscillator — though there’s still the option of using an external audio input. This time the sweep knobs control a filter, and you can adjust the start frequency, the finish frequency, the rate of sweep and the filter resonance. Other controls are for volume and decay, with LEDs showing power and the presence of a trigger, which again may be activated from the panel button or by an external pickup. There’s also an expression pedal input for controlling the filter frequency. This time around the trigger sensitivity is controlled by a ‘hi/lo’-style button, rather than being variable, and the response to an external trigger exhibits a degree of velocity sensitivity.

Another hidden trick is an internal switch that, when set, allows a jack plugged into the expression pedal input to disable the volume envelope so that an aux in signal can be treated to continuous wah-style filtering.

Sonically you get pretty much what you might expect. The Super Space Drum can conjure up deep kicks, electronic toms, ’50s sci-fi whoops and some grungy FM warbles. It could really use a noise source to add a Simmons-style stick hit sound to the drums, but as it stands it handles those retro analogue drum synth sounds without fuss. The kick sounds are perhaps the most impressive on a musical level and could well be used to beef up kick samples. With an aux input, triggering the unit allows a burst of sound through according to the decay time setting of the drum.

The Crash Pad excels at electro-snare type sounds, but can do long whooshy sweeps as well. Having full control over the filter makes it very easy to fine-tune the sound and, of course, if you have both units you could combine them to good effect for creating your own electronic drum samples. The results using an external input vary depending on what you use as a source, but essentially the Crash Pad behaves as a triggered resonant filter that can sweep in either direction and which can have an envelope as short as a handclap up to a decay of several seconds. It can also be used as a continuous filter for treating other synthesizer sounds if you plug in the pedal jack and flip the internal switch.

Though not overly sophisticated when compared with some software alternatives, these units do exactly as claimed, and complement each other very well.

Both products are very simple and produce a limited range of sounds, but they do everything they claim with no fuss.