The Electro‑Harmonix Memory Man is one of the longest‑running and most popular analogue delay pedals around and there have been several incarnations over the years, some of them quite bulky. This latest Nano Deluxe version not only manages to cram everything into a compact pedal format but also heralds some worthwhile improvements. 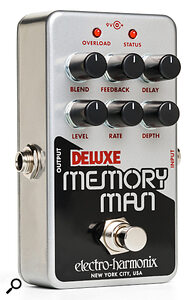 You get the familiar analogue delay plus modulation (in the form of chorus and vibrato) but the control layout is a little different from that of earlier models, in that the modulation section now has separate Rate and Depth knobs. The maximum delay time has also been increased to 550ms, plus there’s an internal switch to turn delay tails on or off when bypassed; when set to off the pedal has true bypass switching. A Status LED shows when the delay is active. A standard EHX 9.6V power supply is included and we’re informed that the pedal requires 150mA should you wish to run it from your own pedalboard supply.

There are mono ins and outs on quarter‑inch jacks but there are no control pedal inputs. The delay time control goes from 30 to 550 ms. The Feedback knob sets the number of repeats and can deliver runaway feedback at maximum settings. Input gain is set via the Level knob, so when it’s engaged the pedal can add a useful level boost or attenuation if required; an overload LED that warns when you are pushing this too hard. The wet/dry mix is set using a Blend control, while the Depth and Rate knobs adjust the modulation, which varies in character from vibrato to chorus depending on the setting of the Blend control.

Tonally, this pedal produces the warm, but by no means dull, characteristic of a well‑designed charge‑coupled analogue delay line: the repeats tend to sit nicely behind the dry sound, adding support without sounding too in‑your‑face. As the delays repeat, they dissolve into the background in a very tape‑like way too. The maximum delay time may be a little less than for some digital pedals but that’s the nature of the beast.

The maximum delay time has also been increased to 550ms, plus there’s an internal switch to turn delay tails on or off.

Longer analogue delay lines tend to generate more noise anyway and while there’s a little audible noise here it dies away as notes decay, suggesting that some form of compander noise reduction may be being used. It could be argued that a little noise is an essential part of the analogue delay sound but, either way, I don’t think the noise here is unduly obtrusive and, if anything, it’s less noisy than the original full‑size units.

At shorter settings you can conjure up a rockabilly‑style slap‑back delay and the modulation sounds rich and musical as long as it’s not overdone, whether used at shorter delay times to produce chorus/vibrato effects or at longer times to add subtle movement to the delays. With a little careful modulation tweaking you can also get very close to a warm and slightly worn tape‑delay sound. The smaller knobs are a bit more fiddly to get your fingers around but that’s a small price to pay for having such a compact format.

Overall then, this pedal captures pretty much everything that was attractive about the Memory Man Deluxe. It increases the delay time and adds more control over the modulation, and all in a more pedalboard‑friendly package.