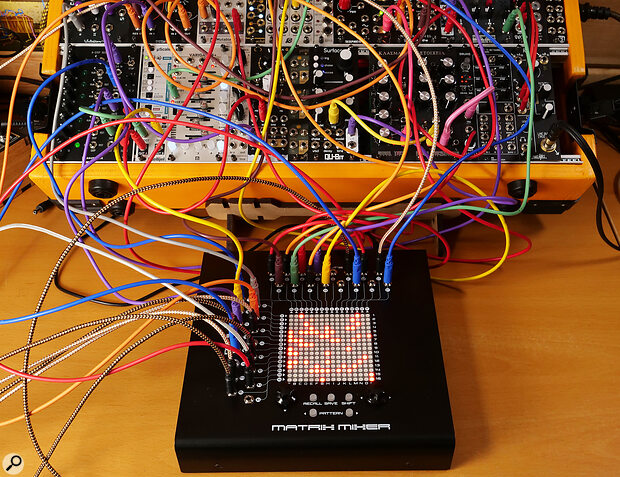 Erica Synths’ Matrix Mixer could change the whole way you think about modular.

The modulation matrix has long been a staple of synthesizer signal routing. In its traditional form, you have a column of sources on the left and row of destinations along the top and you use pins to make connections between them. It’s the sort of pin matrix found famously on the EMS VC3 ‘Putney’ synthesizer. More modern matrixes employ digital connections, using buttons or software. The main advantage of this method of signal routing is that you can make many connections quickly and easily and form complex configurations in a very compact space.

Usually, a matrix system will be built into a particular synthesizer’s structure, with set sources and destinations. Erica Synths’ Matrix Mixer is pulled directly from their Syntrx synthesizer, but breaks free from all that structured nonsense to offer a 16x16 matrix that can route any source of audio (either external or Eurorack) or CV signal to any destination with a snazzy array of LEDs and a pair of encoders. It’s housed in a good‑sized standalone box — you get the impression that once they made the decision not to try to squeeze it to fit into Eurorack format they could relax and build it into something that sits very solidly on the desk and has quite a commanding presence. This is the sort of device that wants to be centre stage. You’ll find as you get into it that everything wants to go through it, and it moves very quickly from an overblown utility to a creative tool that shapes your entire workflow.

The connections are comprised of 16 DC‑coupled inputs and outputs arranged in a zigzagged collection of patch sockets on the front panel in which you can easily get lost. Out the back, the first two inputs and outputs are mirrored on quarter‑inch jacks for external instruments; there’s also a MIDI In port and a fun on/off switch that’s labelled backwards. The star of the show is the LED‑infused Matrix panel, which is set deliciously off‑centre and labelled 1‑16 for the inputs and A‑P for the outputs. The grid is populated by 256 LEDs which you can turn on and off with a pair of clicking encoders; one deals in horizontals, the other in verticals. Grab the encoders and you end up chasing connections about the place like you’re playing Centipede in an arcade.

Round the back we find a MIDI In socket, and quarter‑inch duplicates of the first two inputs and outputs.

To connect an input to an output, you simply use the encoders to locate the intersection and push down on either to enable the connection. You can connect one input to 16 outputs, or many inputs to one or more outputs. You could see it as an overly elaborate mult as well as an overly simple mixer, and that’s exactly what it is. All you need then is imagination. So, at a basic level you could take an LFO and route it to up to 16 destinations. But why not combine it with a couple of LFOs, or take a sequence to different oscillators, or the same trigger to different events?

You could take an audio signal though different effects in parallel or series, or wire up all your filters and choose which ones to route your audio to. You can mix the outputs of many things into fewer things or different things; you could combine voltage from a keyboard with the output of a sequencer for transposition, or generate interesting waveshapes with colliding envelopes. The more you play, the more possibilities seem to emerge, and 16 channels gives you the space to do several things at once: some modulation here, some audio mixing there, some feedback loops over in that corner while mixing triggers in another. You find yourself designing patches around the Matrix Mixer and pulling in modules you might not have included in a long time. It makes you reassess how you build patches and how signal flows, and enables you to be more courageous and interesting.

The Matrix Mixer has a few tricks up its digital sleeves which you won’t find on analogue matrix mixers. The big one is the ability to save and recall your entire patch. This starts off mildly useful because things can get complex very quickly and it’s a good way of trying out different ideas, comparing and organising them. Then it dawns on you that it’s a clever way of introducing variation and changes to your patch that you can drop in mid‑performance. With the touch of button you can re‑route your oscillators to different filters, switch sequences, transpose, turn effects on and off, disable or enable sounds without having to physically re‑patch anything. With every patch you’re now thinking about layers of change and variation. What might have been an interesting but repetitive patch can run off into lots of different directions that are all instantly recallable and you find yourself in an unusual position in Eurorack where you might feasibly have a verse, chorus and middle eight structure at your fingertips. Alternatively, if you like leaving things connected, you could see it as way of storing Eurorack presets, which is an interesting concept by itself.

The Matrix Mixer has a few tricks up its digital sleeves which you won’t find on analogue matrix mixers. The big one is the ability to save and recall your entire patch.

Another, more unwieldy feature is the ability to randomise the patch. With a couple of button presses, your carefully crafted patch can be completely destroyed as all the wrong things find themselves patched into each other. However, you can bend it into a more useful tool by defining how much of the grid the randomisation process affects, and how chaotic the randomisation is. Keeping it confined to a certain area or relating to a certain task can generate some interesting results — but you use it at your own risk! There’s also no undo, so always save your patch before rolling the dice. 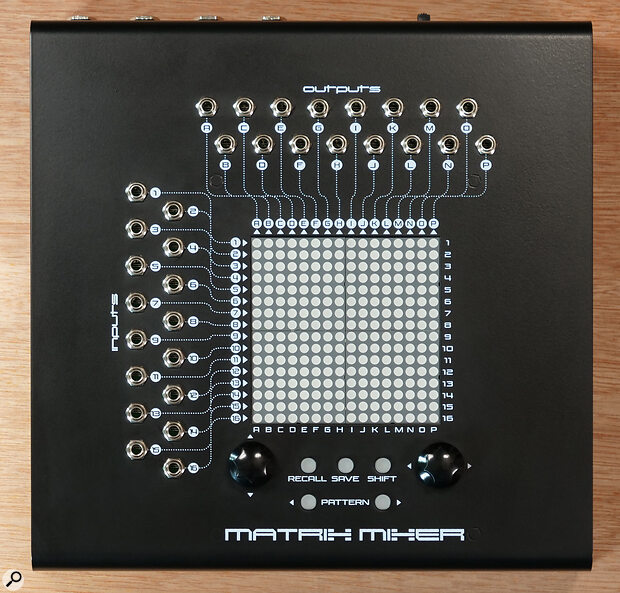 Whilst it might have been possible to squeeze the Matrix Mixer into a Eurorack module, Erica have taken the right decision to make it a standalone device. The resulting unit measures 225 x 226 x 44mm.

I mentioned that the Matrix Mixer is simple when it comes to mixing signals, and that becomes a factor once you start experimenting. When combining signals from multiple inputs the output is just a sum of the input; there’s no auto‑balancing going on and so it’s quite easy to run into clipping and distortion issues with audio, or flattened CV modulations. Erica Synths have provided some help with this by building in a couple of levels of attenuation. Each Matrix connection can be turned on or off by pushing the right encoder, while the left encoder it steps through 30 percent and 70 percent levels, visually represented by a slightly dimmer LED. This enables you to mix both audio and CV signals with a little bit more very welcome control.

In terms of simplicity, though, that’s all the mixing nuance you’re going to get. There’s no panning, no mute without navigating the centipede to the right connection and then turning it off, and no solo without a radical change in patch. To get around these limitations, I ran all my audio inputs through a SSF Muton module first so I could easily turn audio channels on and off. You could do a similar thing using different Matrix patterns, but sometimes it’s easier to reach out and mute something. For stereo returns from effect modules, I could run them to two outputs and use the attenuation levels to do a bit of spatial balancing. But the Matrix Mixer is always going to fall short when it comes to being what we normally think of as a mixer, and attempting to build those features in would have made it a very different and much larger device.

The Matrix Mixer radically changed my approach to Eurorack. It pushed me into all sorts of ideas and experiments that I had never considered before.

Perhaps the biggest missing feature is the lack of CV control over the Matrix patterns. It would have been great to be able to send it a pulse to change to the next pattern, or have patterns selected by voltage values so you could run in a sequence to automate the change of patch. Instead, there’s a MIDI input which can do exactly that using Program Change numbers, but that’s less convenient in Eurorack.

Chasing the LEDs about with the encoders works well and I appreciate the digital abilities that gives us, but it is not as quick or intuitive as making a connection by poking it with a pin or breaking a connection by pulling one out. As it’s digital, you feel that this could be resolved by making the LED grid somehow touch‑enabled so you could put your finger on an LED to turn it on or off. This would probably make for a much more expensive device but would give us back an analogue feel to the Matrix.

Lastly, with 16 things plugged in and out it’s easy to lose track of what module is plugged into which socket. It would have been nice if there were scribble strips alongside each socket so you could annotate it. I guess a bit of masking tape would do the job.

The Matrix Mixer radically changed my approach to Eurorack. It pushed me into all sorts of ideas and experiments that I had never considered before. The ability to swap filters, to move gate patterns to different devices, to suddenly stuff a bunch of audio into the QuBit Data Bender and then swap it to the Mutable Beads, to turn delays on and off, transpose two different sequences from a single keyboard on three different oscillators and so on is amazing. It’s one of those devices that blows your mind with the possibilities and has you wiring in modules you’ve neglected in your thirst to fill every socket and try every angle. Sixteen channels is enough to run sequences, effects and modulations in the same patch and then have them all changed and rearranged through the selection of the next pattern. If you’re doing a performance with a couple of cases of modular it’s a complete game‑changer.

The Matrix Mixer can bring order to the chaos of your Eurorack signal routing while sparking new thought patterns, developing patches and introducing variations at the touch of a button.