Eventide have put their out‑there reverb effect into a compact pedal.

One of Eventide’s most popular algorithms, Blackhole, has been included in several of the company’s products now, including their H9 pedal, the H9000 rackmount effects unit and their Space Reverb pedal, as well as being available as a software plug‑in. It’s an effect that takes reverb beyond the more familiar halls and plates to create something much larger — though it can be dialled right back to a small, resonant metal tank if you need it. 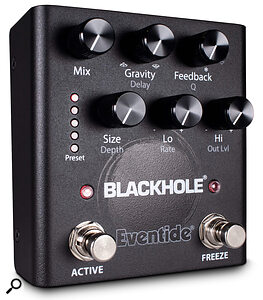 In its latest incarnation, the Blackhole algorithm’s host is a sensibly compact stompbox controlled by six knobs and three illuminated buttons. Five of the knobs have a secondary ‘shift’ function, so these few controls can access all the functionality of the original algorithm. Five presets can be called up directly from the pedal, though you can also control it via MIDI (by plugging a MIDI to TRS cable into the EXP port), which expands this to 127 presets. Those 127 presets are also accessible using the free the Eventide Device Manager software when a computer is connected using the micro USB port. Power comes from the included 9V adaptor, or a standard pedalboard supply.

The pedal has a TRS input jack, which is switchable for mono or stereo sources, and two TS jacks for stereo or parallel‑mono outs. It is switchable guitar or line‑level operation, so you can use it as a DAW insert or send effect if you have sufficient I/O, without needing a reamp box, and it could hold a lot of appeal for modular synth fans too. The EXP jack can be configured to accept Expression, Expression plus Aux, Triple Aux, a MIDI Box, or a MIDI TRS Cable. A single Aux switch in the EXP plus Aux mode enables you to control tap tempo, while in Triple Aux mode you can bank up and down and load presets. Used with an expression pedal, the high and low range of each control can be set independently, so that the pedal works similarly to the ribbon controller in the ‑based software, morphing between two sets of control settings. 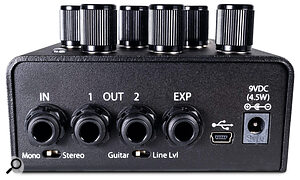 The single TRS input jack can be configured for use with mono or stereo sources.One of two footswitches works as a bypass and the other as a Freeze effect, in which the reverb tail is held indefinitely. The Freeze footswitch can also be used to access presets. There are actually two types of Freeze here: Infinite continuously layers new sound on top of the initial reverb; and Freeze holds the reverb tail without adding to it, allowing you to play over it. An LED‑button above the Active switch flips that switch from latching to momentary action, while the one above the Freeze switch is used when saving or incrementing presets.

The five preset LEDs also display statuses in setup mode, for example to show the MIDI channel. As you’d expect, Setup and preset management is handled most easily using the Device Manager app, but it can still be achieved using the hardware alone.

You can use it as a DAW insert or send effect if you have sufficient I/O, without needing a reamp box.

In the default (‘unshifted’) mode, the knobs control Mix, Gravity, Feedback, Size, Lo EQ and Hi EQ. Feedback sends the reverb output back into the pre‑delay input, and the Gravity control can go positive or negative, to provide various lengths of normal reverb in one direction and reverse reverb in the other. The five secondary (‘shifted’) functions, accessed using an LED‑button, gives access to (pre‑) Delay up to 2000ms, Q, Depth, Rate and Out Lvl. The modulation is applied within the algorithm, not simply before or after it, so it doesn’t sound too obvious.

With all the controls set centrally, the result is a large but more or less conventional‑sounding reverb, but it doesn’t take long to find settings that produce near infinite washes that still allow the dry sound to stay intact. Other settings can sound reversed or produce repeating delays washed over by reverb; perfect for ambient and cinematic composers. There are no shimmer settings and no choices of acoustic environment, so the Blackhole pedal isn’t an ‘all bases covered’ reverb but, rather, a practical means of putting one of Eventide’s best‑loved reverb algorithms into an accessible stompbox format.

So why yet another version of the Blackhole? Well, it’s less costly than the Space and H9 pedals, more compact than the Space, and boasts more user controls than the H9. All of which makes it an attractive proposition if you want a device dedicated to this effect alone.

Eventide’s most affordable and compact hardware version yet of their popular Blackhole reverb.