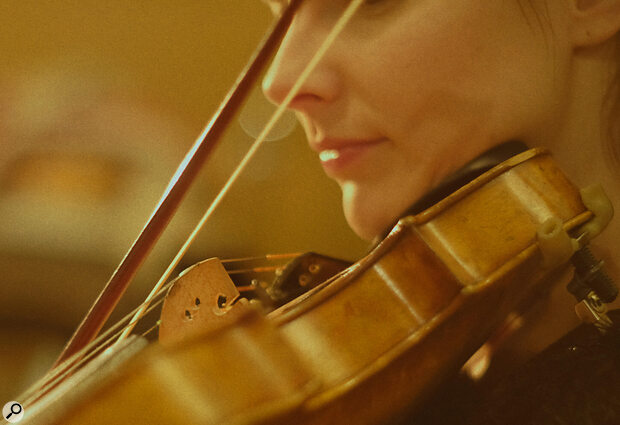 There is a particularly austere and engaging aesthetic to Felt Instruments products, which seemingly emerges straight from the soil of Polish culture. Trapped for years behind the Iron Curtain, the country managed to maintain a unique cultural and international profile instead of just melting into a larger Soviet soup. Despite strict censorship (or perhaps in spite of it), great composers emerged and with them entirely new ways of creating music. The film scores of Kilar and Preisner, the sonoristic experiments of Penderecki, and the new tonality of Henryk Gorecki are good examples. Through this time and into the new independence beginning in the 1990’s, Poland had robust community music programs as well as excellent education in maths and later computer science. In recent years her growing international creative profile has given rise to a revolution in video game making (such as the iconic Witcher series) as well as popular forays into streaming services such as Netflix. It was only a matter of time, therefore, before she gave us something of real consequence in the realm of virtual instruments.

Enter Felt Instruments, founded by composer and engineer Tomek Ślesicki in collaboration with the sensational genre‑bending multi‑instrumentalist Marta Zalewska (seriously, look up her YouTube videos). Their latest and most ambitious effort is the Blisko series, comprised of a violin, viola and cello (available separately or as a suite). The Polish word Blisko actually means ‘close’, and the intense nearness of these particular instruments is effectively presented by expressive musicality and captured through the palpable warmth of vintage analogue gear to create a truly original effort. Curious composers should also check out Felt Instrument’s encapsulation of the Hohner Guitaret, Jasno, which means ‘bright’, and super‑soft upright piano, Lekko, which literally means ‘light’. Also fun is the free Wolno (slowly) library of half‑speed piano samples.

What quickly becomes apparent is that Felt Instruments are not a Polish IKEA of samples with minimalist design and clever ethnic names; rather they offer expressive instruments with warm, sometimes gritty, and often evocative characteristics. The library is organised into two collections: the Shapes section contains sustained notes, col legno, unmeasured ricochet, and swells. The Moments section consists of varying textures with a strong sense of motion. All the instruments in the series sit in an attractive custom player whose interface is certainly minimalist in inspiration and design. (The instrument is not standalone, however, and must sit within a DAW.) 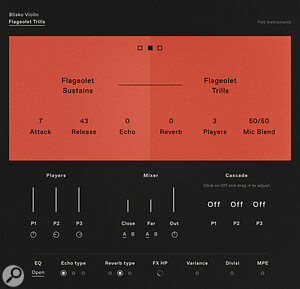 A Violin combo patch allows the user to transition between harmonic sustains and harmonic trills.Practically, this tends to translate to quick results in the creative realm. Upon loading your instrument, you can immediately affect the envelope, tape delay, reverb and mic blend (with two dry room and two close signals which can be blended) for each instrument while receiving attractive visual feedback. You can stretch and spread each instrument from a texture which covers between one and three players, effectively triggering the overdubs which provide for more variance in performed textures and also greater thickness. If you click on the ‘Tweaks’ tab at the bottom, you access a more detailed pane where echo and reverb types, the panning and volume of the individual players can be set, and a ‘Cascade’ option to delay the onset of the players is available: this is sometimes the secret to creating both great infinite sustains and more musical aleatoric performances. Also highly useful is the divisi switch. The EQ pane is similarly minimalistic and designed to resemble one of Tomek’s Austrian EQ’s. The three dials are joined by a Preamp button which further colours the sound.

As Ślesicki makes clear, his intent was not to create a one‑stop comprehensive string library, but rather a unique tool for composers to add to their existing collections. Practically, this instrument is capable of adding additional life and motion to pad and aleatoric sequences while providing compelling new techniques and performances for existing string templates; I found it a particularly valuable addition to both my sketching and my string quartet templates. The dry nature of the recordings also makes it easy to match into existing ensemble string libraries. It’s particularly fun to blend the performances and patches, spread to three players in the settings, into larger string sections, mixing esoteric techniques into a larger ensemble patchwork.

For my money, the Blisko collection is a goldmine of moody inspiration and pathos‑driven performance, and one which certainly will enrich the creative palette and digital arsenal of many composers.

The first four patches in the library offer short performances. Ark offers a grainy, moody medium‑length sustain with plenty of delicious bow noise, which retains its character even when the reverb setting is way up. Rise offers a short and more aggressive articulation, while Col Legno does exactly what you would expect at first glance, though some tweaking leads to more interesting results. Try, for instance, to spread to three players, change the value of the cascade setting, and turn up your reverb while changing to the third type: the Col Legno then takes on a very different characteristic due to how its short sustain interacts with the new reverberant settings; the ricochet setting works similarly. 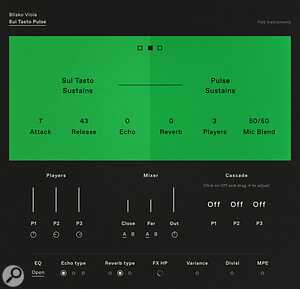 A Blisko Viola combo patch allows users to transition between Sul Tasto sustains and a pulsing figuration.Beginning with Sul Tasto Pulse, the second line of available presets contains the ‘Eternal’ sustains, and often lets the user crossfade between two and three performance settings by using the mod wheel. Users will notice that three small squares have appeared near the top of the interface: this allows you to toggle between a single articulation type, a mod wheel crossfade between two types of articulations selectable by the user, and a crossfade between three chosen articulations. This is where the real magic of this clever little collection takes place.

As always, the divisi switches allows you to have individual players play the techniques, or groups of three (to quickly bring you to a larger section density). The third and final line of sounds are more pointillistic in nature though also sustained indefinitely.

If there is one complaint to level against Blisko, it is that the sounds are so very nice that the user naturally desires a few more articulations. One or two more standard sustain patches or some manner of repeat or re‑bow setting would add even deeper functionality to an already useful product. As Ślesicki has updated the instrument numerous times even during the writing of this article, there is no reason to believe that this labour of love will not continue to grow along with his company’s other efforts.

The website samples of this instrument are entirely representative of its capabilities, so interested composers and sound designers can confidently audition capabilities there.

Felt Instruments punch well above their weight with this useful tool. Yet perhaps the most telling aspect of whether a VST transcends function and enters into the realm of art is whether or not it is capable of inspiring new music in its own right. For my money, the Blisko collection is a goldmine of moody inspiration and pathos‑driven performance, and one which certainly will enrich the creative palette and digital arsenal of many composers.