Back in 2016, Focusrite’s Pro division entered the market for high‑end audio interfaces with the Red 4Pre. Not just a good‑sounding Thunderbolt interface, the 4Pre was also a gateway to the wonderful world of audio over IP, providing both native systems and Pro Tools HDX rigs with the means to access up to 32 I/O streams from a Dante network. Focusrite swiftly followed up with 8Pre and 16Line variants, which retained the Dante connectivity whilst offering different complements of local I/O.

Four and a half years on, the original 4Pre has hung up its spurs, to be replaced by a new junior member of the range. This new interface is so similar to its predecessor that it could have been christened the 4Pre MkII, were it not for one thing: it has lost two of the four mic preamps that gave the Red 4Pre its name. So, making a virtue out of necessity, Focusrite have called it the Red 8Line, since it does at least muster the same quotient of line‑level inputs and outputs.

In most respects, the new 8Line is identical to the older 4Pre. The front panel differs only cosmetically, and the rear panel still sports two DB25 connectors for the titular line‑level I/O, two pairs of optical sockets that can carry up to 16 channels of ADAT‑format digital I/O, and a coaxial S/PDIF input and output, plus mini‑Digilink connectors for HDX, a pair of Ethernet sockets for Dante action and BNCs for word clock and Loop Sync. The 8Line’s two Thunderbolt sockets use the newer Type‑C connector, and Focusrite swim against the tide by actually providing a cable, which is very welcome. The 8Line’s audio specifications are also unchanged compared with its predecessor, and by the time you read this, it should be compatible with Windows as well as Mac OS.

Operationally, the 8Line is very similar to the 4Pre, so I’ll refer readers who want a full description to my review of that unit in SOS May 2016. However, there are a few ‘under the hood’ improvements that are worth mentioning. The line‑level inputs and outputs can now be aligned individually for +18 or +24 dBu operation, which will especially benefit those who want to use them to integrate outboard gear as DAW inserts. And the 8Line addresses a potential shortcoming of the 4Pre by allowing the local inputs to be delayed by up to 253 samples in order to time‑align them with audio arriving over Dante.

One thing that has changed since the 4Pre was introduced is that these settings are no longer made using Focusrite Control. That utility is now associated only with the company’s project‑studio interfaces, and local settings for Red interfaces are handled within the RedNet Control program that is used to configure Focusrite’s other networked audio products. 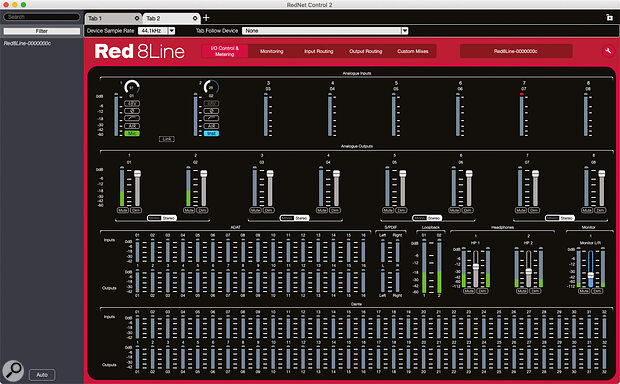 Red 8Line settings are now made within the RedNet Control app.

The Red 8Line control tab within this utility offers much the same functionality, and lets you configure up to eight low‑latency cue mixes. Each can draw on up to 30 sources, meaning DAW playback channels and analogue, digital and network inputs. There is, however, no change to the rather basic monitor control features, so if you want speaker switching, talkback, mono and so on, you’ll have to buy an additional monitor controller.

A limitation of the 4Pre at time of launch was that although it presented a total of 56 inputs, these couldn’t be reordered, so if you were using a DAW that only supported 32 inputs (ie. the native version of Pro Tools), much of the Dante I/O was inaccessible. That has long since been rectified, and RedNet Control permits you to freely assign physical inputs and outputs to DAW inputs and outputs in any paired combination.

The similarity of the new Red 8Line to the original Red 4Pre really reflects how right Focusrite got things the first time around.

It’s an example of the way in which the already impressive Red interface concept has matured since 2016, and the similarity of the new Red 8Line to the original Red 4Pre really reflects how right Focusrite got things the first time around. It’s a shame to lose two of the rather nice Red Evolution mic preamps, but as I said four years ago, this interface is primarily a hub for expansion, and in most real‑world installations, it’ll be paired with additional converters and preamps, or with a console. Two mic preamps is plenty for those occasional control‑room overdubs. Red Evolution, in fact, pretty much sums up the Red 8Line, and with networked audio becoming ever more important, I’m sure it will continue to evolve.

Focusrite have brought the Red 4Pre up to date with Thunderbolt 3 ports and +24dBu alignment.