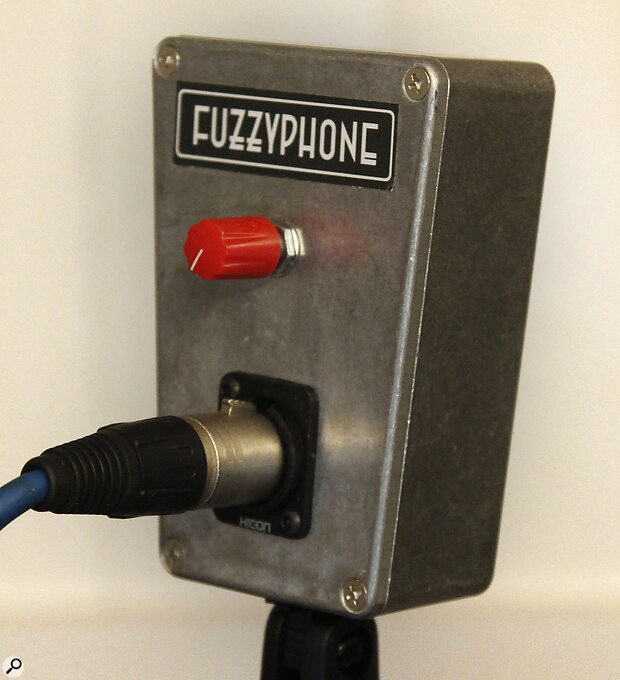 French company Griffon Microphones make a range of small‑ and large‑diaphragm mics, some based on vintage German and Austrian models, and some of their own design. The Fuzzyphone they sent me for review, however, is a little unusual, in that unlike the rest of their range, it’s intentionally designed to be bandwidth‑limited, and it incorporates a variable distortion effect.

The idea of lo‑fi microphones isn’t new — people have been modifying old telephones and CB radio mics for years — but in the last few years, a few companies have started offering their own off‑the‑peg takes on the idea, notably Placid Audio with their beautiful handmade copper mics, and Wasaphone, who make a few steampunk‑inspired options, as well as a pre‑modded telephone handset with XLR output.

Those mics mostly rely on outmoded capsule technology to provide their crunchy, gritty, vintage‑style sounds, but the Fuzzyphone’s capsule is a pretty standard cardioid moving‑coil affair. Its frequency response is quoted at 140Hz‑10kHz (with no qualifications, not that it matters much in a mic that isn’t exactly designed for faithful capture), and its output impedance is a nominal 250Ω. It relies on phantom power to operate, and its output is on XLR.

Aesthetically, there’s something quite charmingly homespun about the Fuzzyphone, which sits just on the right side of shoddy in terms of build. Perhaps appropriately, it looks a little like a boutique overdrive pedal, and it’s made rather like one too, with all the ingredients housed in an unfinished aluminium case, and a big red knob protruding from the rear, below the Fuzzyphone label and above the XLR output. The front is where the sound goes in, and you can see the moving‑coil capsule through a red grille. In fact, you can see it extremely well, because it’s pushed right up against said grille — which makes it easy to overload the capsule, as I discovered when plugging it in...

Its funky looks and ability to get a unique sound out of pretty much anything could add just the bit of spark that a flagging session needs.

Perhaps because I expected it to have a low output, and maybe also partly because of its shape, I first tested it by speaking straight into it like a walkie‑talkie. Unsurprisingly, given how close I was to the mic’s diaphragm, it immediately overloaded even with the distortion knob turned all the way down. With a little more distance, though, I was able to get a surprisingly clean sound out of it — not quite SM7B or Heil PR40 levels of broadcast‑friendly smoothness, but not a million miles away from an SM57 in terms of clarity and HF extension.

Dialling up the distortion effect is where it gets fun. One thing to watch out for is that, on the review model at least, the knob worked backwards, with fully clockwise being clean and fully anticlockwise dishing out the most distortion. This is quite intuitive if you’re turning the knob while singing into the mic, but not so much when facing the back.

On vocals, the effect ranges from clean, via mildly crackly and lo‑fi (a little like an old AM radio), all the way up to Deftones‑esque screaming, and producing quite guitar‑like tones at max. It’s also very level dependent, and therefore varies quite a lot with distance. On acoustic guitar and with the mic a foot or so away, the effect tops out at something like a mild overdrive — which actually sounded very pleasing and bluesy. On a guitar amp, you can coax wilder tones out of it by either moving the mic closer to the grille, or just turning the amp up. Sadly, I didn’t have a drum kit handy to try it out on, but I can well imagine it being useful in the role of a compressed ‘grot mic’, and likewise as a secondary mic on a bass cabinet.

Adding distortion to sounds other than guitar is one of the worst‑kept secrets in pro audio, and there are a million and one plug‑ins around that are designed for the purpose. But the experience of recording with it ‘baked in’ is a different one, and can yield very different performances compared with adding distortion after the fact, especially on vocals. The Griffon Fuzzyphone is cheap and its build quality is pretty agricultural, but its funky looks and ability to get a unique sound out of pretty much anything could add just the bit of spark that a flagging session needs. In short, it’s a fun mic to have around!

The Fuzzyphone has lo‑fi on tap, but can also be coaxed into producing some pretty wild distortion effects. It’s affordable, and every bit as fun as it looks.