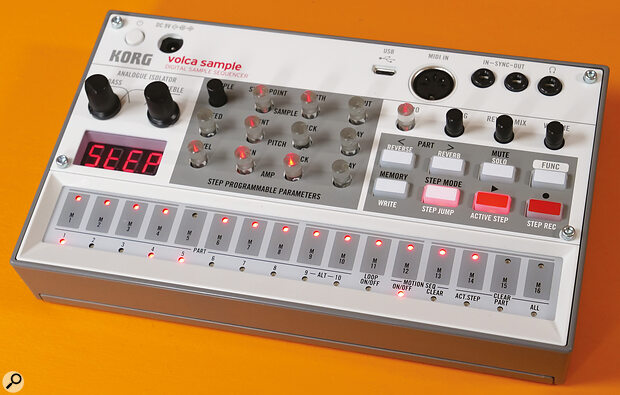 Korg rework their popular Volca Sample with some welcome additions.

In his review of the original Korg Volca Sample in the SOS February 2015 edition, Paul Nagle believed it to be “the most versatile Volca yet,” and he’s not wrong. With the aptly named successor, the Volca Sample 2, it retains everything Paul liked about it and all the things he didn’t because it is almost entirely the same machine. The only noticeable changes to the exterior are a USB port that has been added in such a way as to make you believe it was always there, and the outer case is now a more subdued and groovy dark grey as opposed to the somewhat medicinal white of the former. All the other changes are under the hood, so let’s pop it open and have a look.

If you’re not familiar with the Volca Sample then let me tell you that it’s a fun little digital sample‑playing beat machine. It has a 10‑track sequencer of 16‑steps and a ‘Motion Sequencer’ where individual parameters like sample length, speed, level, pan and envelope can be recorded for each step of each track or smoothly automated across the pattern. It has an ‘Analogue Isolator’ built in, which is essentially a low‑ and high‑pass filter masquerading as Bass and Treble controls plus a rather funky reverb. It’s fast, fruity, full of life and character. It doesn’t do any sampling itself but with the new USB port, transferring samples over should be a piece of cake.

The biggest new feature is all about the USB port. No longer do you have to patch the audio output of your computer to the Sync In of the Volca Sample to attempt an often hit‑and‑miss transfer of sample banks as data across an audio cable. With the dedicated Volca Sample Librarian software “sending your samples and patterns back and forth is now an instantaneous and pain‑free process”. Sadly, it wasn’t for me. When attempting to pull over the samples and patterns from the Volca it complains about a lack of Korg USB Driver and then times‑out during transfer. Once I’d found the driver on the website, installed, restarted and retried, the Volca Sample 2 had disappeared altogether. With the help of Google and a video by Tim Shoebridge it all worked out in the end, and I can now experience the “instantaneous and pain‑free process” as my Mac OS‑based colleagues are undoubtedly already doing.

The USB port enables the use of the Volca Sample Librarian software on a suitable computer. It sucks in all the patterns and samples from the Volca and displays them in a list where you can rearrange them, audition samples and load or save new ones. 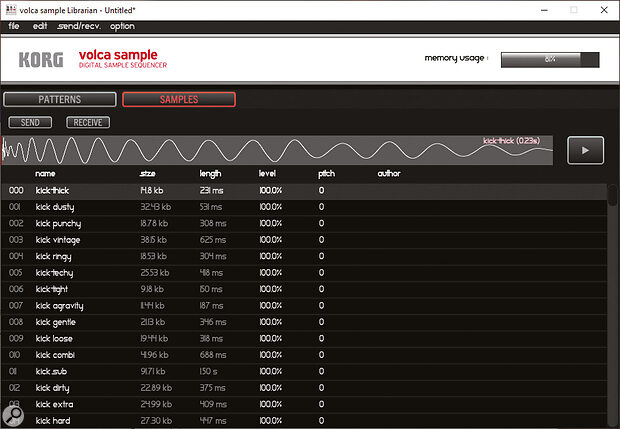 On the Patterns side you can save, load and rearrange the order of the 16 internal patterns. It comes with 12 quite stunning ones and so you might want to save them just in case you mess them up. You do have four blank patterns to play with, though.

On the Samples side it comes with 150 brand‑new samples. It’s a quite brilliant selection of energy‑infused urban and lo‑fi hip‑hop sounds which, along with the patterns, gives you the sense that you are never going to come up with anything as good or exciting as this. But in case you want to try there are 50 slots free to fill with your own library before overwriting the factory ones.

Importing a sample is simply a matter of selecting a slot and importing from the menu. The Librarian will downsample any audio file to 31.25kHz to give it that Volca Sample 2 crunchiness. You can keep adding samples until the memory is full or you reach 200. The factory bank takes up about 81 percent of the memory and most of them are under a second long. The memory, by the way is double that of the original at 8MB, which amounts to 130 seconds of sample time.

Once you are happy with the order of things you can punt it all across to the machine for playing. It takes moments to send over a sample or two and about a minute for a full dump depending on the size of your samples. I can certainly confirm that the process is pain‑free and often instantaneous.

The most significant workflow development comes in the form of pattern chaining. Instead of loading a single pattern sequence to play with, you can now chain up as many as you want to play one after the other which potentially transforms Sample 2 into a 256‑note sequencer. Although isn’t that what Song Mode was on the original Volca Sample? The sequence steps are labelled M1‑M16, which refers to the 16 memory slots for patterns. On the original they were labelled M1‑M10 for the 10 memory slots and then S1‑S6, which were for saving songs. Songs were a collection of patterns that you had arranged to play back in order and Chain Function seems to have replaced it.

I can’t quite decide whether the removal of Song Mode in favour of extending the sequence count from 10 to 16 is a good or a bad thing. The versatility of Song Mode was that you could arrange the 10 sequences quickly and easily on the device itself. The Chain Function benefits from access to 16 sequences, but the order can only be changed in the Librarian. Also, with Song Mode you can save six songs with their arrangement of patterns whereas you don’t save the Chain Function, you just turn it on and select a series of sequences.

It would be nice to have both 16 sequences and a Song Mode but Korg must have had to make a judgement on what customers were asking for and what could be achieved in the context of the little box.

Version 2 of the Volca Sample builds on what was already a killer little box... it’s a cracking little sample production machine.

Korg has added another option to Step Jump Mode. This is a finger‑tastic mode where the sequence will jump to whatever step you tap and stay there on repeat if you hold your finger down. You can do this with multiple fingers and it will jump around between them in a thoroughly entertaining way. The original mode had the playback move on from the last released step whereas now you can opt for the steps to continue and pick up in the appropriate place when you release your finger. This brings a lot more flow to the mode and makes it feel more like remixing within the context of the pattern rather than as a disruption to it. The only snag is that it’s a global mode choice and so requires you to turn the box off and on again to swap between them.

The Volca Sample 2 has a decent Swing engine for dialling in some feel and groove to the playback. However, with the Start Delay function you can craft in a bit more nuance. Start Delay simply delays the start of the sample by a small amount from 0‑66, which appears to be an arbitrary fraction of a step.

You can apply this along with any of the Step Programmable Parameters to any step of any part by being in Step Mode with the Record button on and holding the sequence step while turning the appropriate knobs.

Version 2 of the Volca Sample builds on what was already a killer little box. Without question the USB port and Librarian makes the samples and patterns easier to manage and can turn it into a sound source that’s uniquely you. New users are not going to miss the Song Mode and we all benefit from the increased memory and 16 sequences. It’s versatile, fun, and the quality of the new factory bank is superb — it’s a cracking little sample production machine.

One of the best Volcas just got more memory, a fat new factory bank and a Librarian for easy sample management. It’s an awesome pocket‑sized sample production station.