Fluid Audio’s studio monitors have consistently impressed us with their price-to-performance ratio. So how does their new subwoofer fare?

Though it partners perfectly with Fluid Audio’s own full-range speakers, the company’s new F8S eight-inch active subwoofer is flexible enough to be used with many third-party active speakers, and has applications in both studio and home theatre/hi-fi environments, where its compact format will be appreciated. The feature set is familiar enough: the sub takes in a full-range stereo feed, sums the low frequencies to mono for its own use, and then passes on a high-pass-filtered version of the signal in stereo to the two main speakers. Usefully, there’s also a footswitch jack for bypassing the sub — and the footswitch is thoughtfully included. 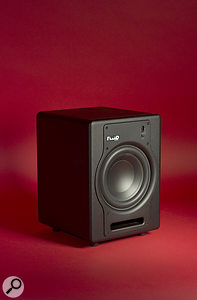 Our review sample came in the obligatory black studio-friendly finish, but you can also buy the FS8 in white. The casework is built from vinyl-laminated MDF and measures 340 x 254 x 270mm, with the sub having an overall weight of 7.9kg. Its eight-inch driver has a composite-paper cone driven by a high-temperature voice coil, and is powered by 200 Watts of Class-D amplifier covering the frequency range 30Hz to 200Hz. A level control slider on the front baffle allows for easy adjustment. The cabinet itself is front-ported, and all the connections are on the rear panel, with a choice of balanced XLR or jack for both the inputs and outputs. There’s also a choice of unbalanced phonos for the inputs. The power supply is factory set for either 100V-120V or 220V-240V 50/60Hz, and the circuitry includes output-current limiting, and protection against RF interference, high temperatures and power on/off thumps. 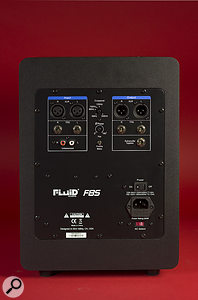 The variable phase and crossover frequency controls allow the F8S to integrate with almost any speaker setup.As the sub is intended as both a studio and consumer audio product, the designers have provided switchable Flat or Punch voicings, where Punch is said to be suitable for those who like their dance music. Enough said — leave it on flat for studio work! Variable phase adjustment from 0-180 degrees allows you to optimise the way the sub combines with the satellite speakers, and the low-pass frequency is adjustable going from 50Hz to 200Hz, tweaked via a slotted knob on the back panel above the phase-adjustment knob. The high-pass filter for the satellite connections is set at 80Hz. Power comes in via an IEC socket with adjacent switch.

Once wired up and with the sub filter set at around 80Hz, I started with the sub volume fader set to minimum and then brought it up until I could just tell that the bass end had filled out a little. Many users make the mistake of setting the sub level too high, but in reality you only need enough that you just miss it when it is turned off. When set in this way, the sub was barely ticking over at my normal monitoring volume, but it still filled out those lows very nicely, the sound integrating well with what I heard from the main speakers. You may want to set the level higher if you’re using it for home theatre, especially if you like your disaster movies, but in the studio it should have an easy life.

By way of sound quality, it adds the necessary low-frequency underpinning without blurring what’s going on higher up, but you may find that on some surfaces (such as wooden floors) the sound tightens up to a useful degree when a suitable speaker platform is employed. I’ve tried the IsoAcoustic stands underneath subs before and been surprised at the difference. It is also important to put the sub in the right place, which usually means away from the centre of a wall and not under a desk or other resonant structure. The tried and tested way of finding a good place for a sub is to first put it where you normally sit, then play something with a complex bass line and move around the edges of the room until you find the place where the bass sounds most even. That’s the best place to put your sub.

Given its small size and attractive price, the Fluid Audio F8S does a good job, without fuss and without taking up too much valuable space. No doubt a top-of-the-line sub would sound a little tighter but the F8S didn’t sound unduly boomy in my room, even without a speaker platform. Even though I had it set at a very low level, I really missed it when I had to put it back in its box. Though you might think that subs and smaller rooms don’t mix, there’s definitely a case to be made for smaller subs in difficult rooms as you can always move the sub to where the bass end sounds the most flat, even if you have no choice as to where to put the main speakers.

I can’t think of many alternatives in this price range other than brands such as Behringer and Samson.

A useful sub for smaller studios or for home theatres.