Designed and built in Germany, and paying tribute to the Tube Screamer sound, Finhol’s Classic Overdrive comes equipped with a switch that allows the user to select between what’s described as a TS9 or TS808 tonal character. Housed in a die-cast case measuring 145 x 95 x 50 mm, the pedal is powered from a centre-negative 9V DC power supply (not included). Oddly, there’s no battery option, even though there’s ample room inside the case for a battery — or even two. The inputs and outputs are on metal jacks at the top edge of the case rather than the sides, so at least they allow you to get close to the next pedal in line.

The expected Overdrive, Tone and Level controls are accompanied by the small Toggle switch that selects the S1 or S2 voicing. An LED shows when the pedal is active, and the footswitch engages a true bypass when the effect is not in use. All the circuitry, which is entirely analogue, is mounted on a very small, T-shaped circuit board — a mix of surface-mount and discrete components rub shoulders. 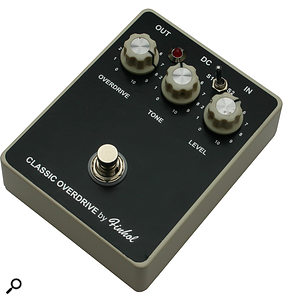 With the tone control centred and the gain set low, the tonal balance with the effect engaged is very similar to that of the input, though with maybe a hint less bottom end. Past the mid-way setting the tone control dials in more high end, while moving anti-clockwise suppresses the highs. All across the range, though, the low end remains essentially the same. In fact the gain range only extends as far as blues or classic rock, even with a fairly lively pickup, with the first half of the drive pot travel being fairly clean. The low end is held in check, just as it is with a Tube Screamer, though I didn’t feel quite the same sense of mid-range ‘bloom’. There’s plenty of touch-responsiveness though, and in the first half of the gain range the pedal works well as an almost clean booster to liven up your amp sound without adding too much filth. The S1 position gives the most warmth while the S2 setting adds an almost single-coil-like edge to humbuckers, albeit in a fairly subtle way.

The name Classic Overdrive, then, is probably a fair description of what this pedal is all about, and it does a pretty good job of it too — though it could be argued that something like an EHX Soul Food or Glove could be set up to provide similar results at around half the price. Of course, the finer nuances of overdrive are very personal, so this may be exactly the sound you are looking for. On a more practical note I can’t see the sense in making a pedal half as wide again as most of the competition, then omitting the option of running it from battery power, even though most of the case houses empty space. Even so, if you have a suitable power source and you don’t like your controls crammed too close together, the Classic Overdrive is well worth trying, especially if you favour sounds from those on-the-edge blues tones to outright raucous filth. Paul White