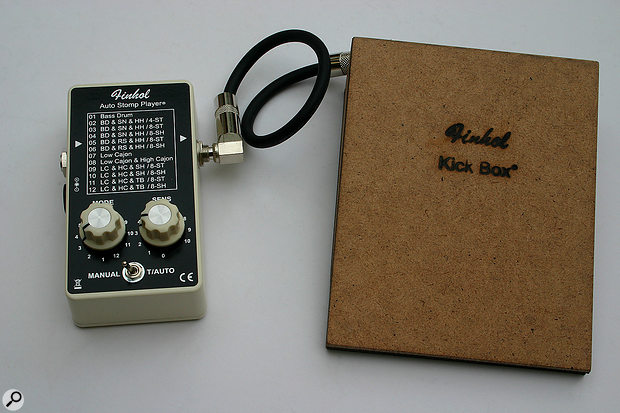 Need a drum accompaniment at the flick of a switch (and the tap of a foot)? Then look no further than this crafty device!

We’ve all seen those stompboxes that are basically a mic capsule in a small wooden box. You stamp on them, they go ‘thud’, and you can play along to the beat for as long as your foot can stand it without cramping up. The Auto Stomp Player builds on this simple concept by using a stomp box to trigger some clever electronics, which can turn your four-to-the-bar thumping into one of 12 different rhythms, as listed on the unit. Eight are based around kick, snare and hi-hat patterns, including a couple of useful shuffle variations, while the remaining eight do something similar but using cajon-style sounds augmented with shakers and tambourine. Maybe some 6/8 rhythms would have been useful for slow blues, but there has to be a limit somewhere.

All the sounds come from samples and sound pretty good through a decent amp. The key part is that the rhythms follow your tapping so you’re always in control over tempo — though maybe that’s not such good news if you’re one of those people who tends to speed up. When you stop tapping, the rhythm stops playing. Some rather sophisticated quantisation technology is used to keep the rhythmic elements sounding tight, and in this mode I can’t really find fault with the device. If you can tap your foot in time you’re done and dusted. Playback is velocity sensitive to a degree, so you can add a touch of dynamics, and the system can cope with any tempo between 50 and 200 bpm.

The ‘bundle’ version I reviewed includes a Kick Box Basic stomp pedal for triggering the rhythms, and an Auto Stomp Player — a small die-cast aluminium box in which the electronics reside, with an input jack for the pedal and an output jack for the audio (the Kick Box and Player are available separately). There are just two knobs and one switch on the box, power for which comes from a 9V battery or the included power supply (though there’s no power LED, which I found a bit disconcerting). One of the knobs operates a 12-way pattern switch, where the patterns are listed on the front panel, while the other sets the sensitivity so that the beats trigger cleanly without interference from floor vibrations.

One thing that I feel is a missed opportunity to add some real usability comes in the function of that switch, which selects between manual mode or an Auto Play mode. In Auto Play mode, you tap the stomp box four times to establish a tempo and then the rhythm starts to play without any further tapping on your behalf. It carries on at this tempo until you hit the pedal again, at which point it stops. The limitation here, though, is that you can’t preset the tempo and then start it playing at some later time, nor can you intervene during performance to tweak the tempo up or down if it isn’t quite right, and the system can’t handle breaks as you have to tap four beats to fire it up again once you stop it.

What would add greatly to the functionality would be a second input jack to connect a start/stop footswitch. The tap input, which would ideally be monitored via a tempo LED, could then be used during performance to nudge the speed up or down if needed, and also to preset the tempo before starting the song, with the footswitch used for starting, stopping and handling breaks. Indeed, using some of the polyphonic pitch-extraction technology that has emerged in recent years, it wouldn’t be asking too much for a guitar in/thru connection that could extract a suitable root-note pitch based on the chords being played, in order to add a simple bass note to the kick beats.

As it stands, the Auto Stomp Player generates perfectly acceptable rhythmic patterns and sounds — though it needs a full-range amplifier to do it justice — and it does all you could ask if you are happy to tap out the time as you play, just as a traditional stomp box player would. That makes the auto side so much more frustrating, as with just a little more thought it could have been really quite flexible, whereas in its present incarnation it’s only practical if you need the same beat all the way through a song, with no breaks.

I don’t know of any alternatives... until somebody builds exactly what I’ve been looking for!

A clever and compact device that allows solo performers to add and control their own rhythm parts. While the auto mode is somewhat limited, the manual mode works exactly as it should.