This preamp boasts huge bandwidth and input impedance. But are those features desirable?

Although they’re manufactured in Taiwan, Fredenstein’s audio processing products are all designed in Germany and America, and some of their conceptual and technical approaches are quite unusual. For example, one of the company’s design goals is to use circuitry that doesn’t rely upon negative feedback to remain linear. The subject of this review, the Fredenstein HD Mic Pre, arguably takes that concept to its highest levels by using a discrete, current-driven amplifier design with a Class-A output stage. The current-input design neatly circumvents the inherent high-frequency-limiting internal capacitances associated with all transistors to allow a huge audio bandwidth of over 900kHz!

Designed to fit standard 500-series rack frames, the review unit was actually shipped pre-installed in the company’s own Bento 6D rack. As the name clearly intimates, this neat rack accommodates six modules plus a bespoke power-supply module. The latter accepts any mains input voltage between 90 and 240 V AC, and features a classy-looking blue LCD panel to detail the status of each power rail, plus various operating parameters from any compatible Fredenstein modules installed in the rack. 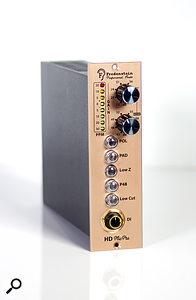 In addition to the standard module inputs and outputs on XLRs, the Bento rack also makes available an auxiliary input and output (again on XLRs) on each slot, for modules that can make use of the facility. Rear-panel toggle switches provide convenient internal signal daisy-chaining between adjacent modules (if required) as well as side-chain bus linking for adjacent compressors. All in all, the Bento 6D is a very elegant and well-specified 500-series rack system.

Lovely though the Bento 6D is as a 500-series rack, the real star of this review is the HD Mic Pre module. Confusingly, when I checked the Fredenstein web site for some background information I discovered it was showing images of the Artistic Mic Pre on the HD Mic Pre page! Thankfully, the online manual does reflect the real physical unit, which has a golden copper-coloured front panel that matches the Bento rack/PSU, and rather an unusual control arrangement.

A simple vertical bar-graph output-level meter sits at the top of the module on the left-hand side, with eight LEDs spanning a range of -30 to +20 dB relative to a zero mark which is aligned to +4dBu. To the right of this meter is a pair of eight-way rotary switches to adjust the preamp gain. It’s an unusual arrangement — presumably a suitable 15-way switch wasn’t available — but it is easy enough to use in practice. The top switch adjusts the gain from 22 to 40 dB in 3dB increments, while its final clockwise position activates the second switch which offers gain options from 43 to 64 dB, also with 3dB steps.

Five buttons below the gain switches and metering illuminate when engaged and activate all the usual signal-conditioning facilities. These comprise a relay-operated output polarity reversal (blue), 20dB input pad (orange), low input-impedance mode (green), 48V phantom power (red), and a first-order 60Hz high-pass filter (orange). A quarter-inch instrument input socket sits at the bottom of the front panel, and this source is selected automatically in place of the rear-panel mic input when a connector is plugged in.

The low input-impedance button I mentioned above doesn’t quite do what one might expect. Most mic preamps present an input impedance of between 1.5 and 2.5 kΩ, which is over 10 times the output impedance of a modern mic (between 150 and 200 Ω), to create the optimum conditions for a voltage-transfer interface. If a low-impedance option is offered, it’s usually something like 30Ω or 60Ω, to suit vintage dynamic mics, which were often designed to operate in a matched-impedance environment with between 30 and 60 Ω, depending on the manufacturer.

However, the HD Mic Pre takes an extreme view of the benefits of the voltage-transfer concept: it presents an input impedance of over 200kΩ by default. The manual states that “this high impedance avoids loading the microphone output transformer and yields in most cases a sonically superior result”. When the Low-Z button is pressed the input impedance is reduced to a more conventional 1kΩ. The concept of ‘minimal loading’ is not new, and a lot of mic preamps offer higher input-impedance options, but they typically range between 5 and 18 kΩ; I don’t think I’ve come across one offering 200kΩ before. It’s a good job we’re dealing with a balanced input here, as unbalanced high-gain input stages with that kind of input impedance, such as conventional guitar amps, are often prone to picking up unwanted radio-frequency interference. 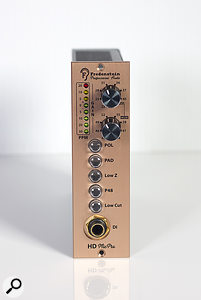 Talking of the balanced input, this unusual preamp design does not use transformers for the input or output connections. Instead, it is electronically balanced throughout. Unlike most 500-series modules, the internal electronics are completely shielded by a full metal case, and that’s probably a very wise idea given its huge operating bandwidth! On removing the metal screening lid and peering inside, the construction involves a single main circuit board, which covers the entire ‘floor’ area of the module, plus a small daughterboard behind the gain switches that also carries the LED bar-graph meter LED and driver circuitry.

The circuitry is built using mostly surface-mount devices (SMDs), and on examining the circuit board more closely, my attention was piqued by two parallel rows of 16 SMD transistors. Another 22 nestle behind the two gain switches as well, and there are also a few conventional op-amps scattered around. Altogether, there are over 60 SMD transistors in the HD Mic Pre, which is quite extraordinary!

Testing the unit with an Audio Precision analyser, I found the low-end frequency response falling to -1dB at 10Hz and -3dB at 6Hz. If the high-pass filter is engaged, the roll-off rises to -3dB at 70Hz with a 6dB-per-octave filter, which is useful to counteract proximity effect bass boost, but less so in controlling unwanted subsonic rumbles. My AP system can’t measure above 80kHz, but the response is ruler-flat right up to that limit, and clearly extends a long way beyond. The specifications suggest the response is -1dB at 700kHz.

On checking the THD+N performance I found it to be slightly better than the published figures, at 0.0037 percent (31dB gain, +4dBu output). I measured the equivalent input noise as -127.6dB (100Ω source impedance and 64dB gain). The published specifications claim -131dB with a 150Ω source, but that figure is equal to the theoretical level of pure Johnson noise from the source resistance alone, without taking into account any active transistor gain noise. With a 100Ω source the theoretical pure Johnson noise level is -132.7dB, but in the real world, a figure of -127.6dB from a preamp raising the level by 64dB is as good as most mic preamps (working with the same source impedance) get, and I’m quite happy with that. In other words, this is a quiet preamp!

The maximum input level with minimum gain and the pad engaged is +23dBu, so full line level can be accommodated if necessary, or +3dBu without the pad. The maximum output level before clipping is +26dBu. Impressively, I ran out of source level when trying to overload the instrument input! It will take +24dBu quite happily, even without the pad engaged, so there’s not going to be any problem with active basses and hot pickups here.

When I was learning audio engineering, a popular axiom at the time was “the wider the window, the more muck flies in”! So, although a 900kHz bandwidth is certainly an impressive engineering achievement, I’m not entirely convinced that it brings significant practical benefits to the recording party, and I remain slightly concerned that it could potentially open the door to unwanted RF interference issues in difficult environments or when using less-than-perfect equipment. For the record, I should state that the construction is clearly designed to minimise the risk of RFI, and I certainly didn’t experience any issues myself during the review period. Nevertheless, even if the HD Pre can handle that kind of bandwidth cleanly, there’s no guarantee that a connected A-D converter will behave so nicely when BBC Radio 5 (693 and 909kHz) is being squirted up its input!

Consequently I find myself unconvinced and even slightly uneasy at Fredenstein’s justifications for designing a front-end audio preamp with a bandwidth that covers half the Medium Frequency radio waveband. For example, the preamp’s manual states that “everybody in the recording industry uses 96 or 192 kHz sampling while tracking”. Well, not in my experience they don’t — but even if they did, to make any real use of the extended audio bandwidth offered by higher sample rates they’d also have to use rare and specialised microphones that are genuinely capable of capturing audio frequencies above about 25kHz. And even then, a preamp would still only require a working bandwidth of around 100kHz or so (as many offer), not nine times more than that!

Putting the arguably excessive bandwidth to one side, along with the unusually high input impedance, there can be no doubt that the HD Pre is actually a very good mic preamp indeed. The bottom line is that it is a very clean, uncoloured, neutral and quiet preamp. It is well equipped with signal-conditioning facilities, too, and the construction is of a very high standard. On the basis that my academic concerns over the input impedance and wide bandwidth proved unfounded in practice during the review period when used with my own mics and cables, I can recommend the HD Pre as a very high-quality, transparent and fast preamp, ideal for the most sonically demanding applications with high-resolution mics. But it might be wise to keep mobile phones and walkie-talkie radios well away, just in case!

The world seems awash with 500-series preamps, some being innovative state-of-the-art designs, others homages to classic preamps, and the rest more generic designs. Earthworks’ 521 ZDT is another clean-sounding wide-bandwidth (though not as wide as the HD Mic Pre) 500-series preamp, designed to take advantage of the company’s own microphones.

This is a high-quality and well-equipped mic preamp that’s based on some unusual design concepts, extending not only to the circuit topology, but also to the input impedance and operating bandwidth.