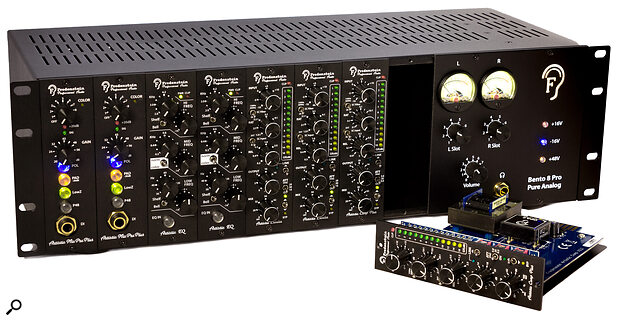 This refreshed range boasts new features and improved specs — but the same great value for money.

Fredenstein have developed a good reputation for affordable, high‑quality products, particularly through their Artistic line of 500‑series modules. I reviewed the original Artist Pre and Artist Compressor modules around five years ago, but they’ve subsequently both been updated and enhanced, as denoted by the new ‘Plus’ suffix. To assist in my review, I was also supplied with pairs of the Artistic EQ and Artistic Leveller modules, effectively combining to create a stereo ‘producer channel’, and it was all housed in the company’s latest Bento 8 Pro rack.

The Bento 8 Pro rack is a solidly engineered 3U rack with eight module slots. It features an internal linear power supply which is capable of delivering a pretty generous 500mA per slot, and the PSU’s front panel includes a trio of LEDs to indicate the presence of the ±16 and +48 V rails. There are also some simple monitoring facilities, which I’ll return to shortly. Extensive magnetic shielding is employed around the mains transformer in the PSU section to minimise the risk of mains hum induction into nearby modules, and I couldn’t detect any difference in the hum or noise floor whether I inserted preamp modules in slot 1 or slot 8, which is good news.

Unusually, the rack ears have four bolt holes, instead of the standard two, and it’s is a welcome feature given that the rack weighs 6kg when empty. The rear panel carries the usual IEC mains inlet with an integrated on‑off switch and fuse‑holder, but the unit only accepts a single (factory‑set) mains voltage. A ground‑lift switch is provided to separate the audio ground from the chassis/mains earth. All audio connections are via XLRs, but ‘daisy‑chain’ toggle switches are provided to link each module’s output directly to the adjacent module’s input (simultaneously disabling its input XLR). Further switches connect the side‑chain terminals of adjacent modules, allowing dynamics processors to be linked in up to four separate stereo pairs, or larger multichannel groups (of contiguous modules).

I mentioned in passing the monitoring facility, which comprises a pair of rotary switches to select the modules feeding the left and right channels of a quarter‑inch stereo headphone socket, as well as a pair of round VU meters. In this way, the outputs of selected modules can be monitored individually or in stereo pairs, which is particularly useful for checking the quality signal through a chain of modules.

However, this particular Fredenstein rack lacks a bespoke feature that’s included in some other Bento racks, and this omission limits its flexibility with some Fredenstein modules. The company have customised API’s original 500‑series module connector pin‑outs slightly, reallocating typically unused terminals to add more useful facilities. Whereas the original API spec provided both high (+4dBu) and low (‑2dBu) balanced inputs and outputs for each module, Fredenstein’s implementation repurposes the low‑level I/O as Auxiliary module inputs and outputs, generally adding extra XLR connectors for them on the rear of some of its racks. This Aux Input feature can be used by some of Fredenstein’s dynamics processors to provide an external side‑chain input connection — but unfortunately this functionality can’t be accessed in the Bento 8 Pro rack, which lacks the requisite rear‑panel Aux connections.

The rear of the Bento 8 Pro Rack: the rack works well, but unlike on some other Fredenstein racks, there are no auxiliary inputs, via which you can feed a signal the compressors’ external side‑chain inputs.

The Artistic MicPre Plus module is an evolution of the original (which remains available). It adds the Color feature of the company’s discontinued Magic Pre. To make room for a rotary Color strength control at the top of the panel, the original module’s bar‑graph metering has given way, and there’s now just a pair of LEDs indicating Signal present (above ‑30dBu) and Peak (+20dBu). This module draws only 50mA from the rack’s power rails. 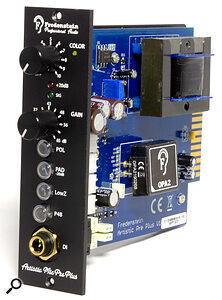 The Artistic MicPre Plus combines the features of the Fredenstein’s original MicPre and their discontinued Magic Pre.Everything else is much the same as the standard Artistic MicPre, though, with illuminated buttons to invert the output polarity, engage a 20dB pad, select a low‑impedance mode (300Ω instead of 1.5kΩ), and to provide phantom power. A TRS socket at the bottom of the panel accepts unbalanced instrument or balanced line inputs (presenting a high 2MΩ impedance) and I’m pleased to report that the maximum input level is now +18dBu. That’s a huge improvement over the original’s limited instrument/line input headroom. The maximum input level via the rear panel XLR is +24dBu (with the pad engaged).

Naturally, the MicPre Plus module’s main advantage over the standard model is the Color feature, which emulates the level‑dependent harmonic distortion associated with valve saturation. The rotary control adjusts the effect’s intensity from fully disabled to very obvious distortion, and an adjacent LED shows when the feature is active and how hard it’s working. With the control fully anti‑clockwise the MicPre Plus is both clean and quiet: I measured THD around 0.02 percent for a +4dBu output, and an EIN figure approaching ‑127dB. (Winding up the Color control increases the amount of harmonic distortion progressively into several integer percentage points!)

It took me a little while to spot the difference between the new Comp Plus module and the original: an extra miniature switch on the left‑hand side between the Ratio and Release controls. Operating this toggles the side‑chain source between the internal signal and an external input — but only if loaded into a Bento 6 or Bento 10 rack; as I said earlier this isn’t available on the Bento 8 I had in for review. There are other differences behind the panel, though, since the circuitry has apparently been improved for greater stability. The same fast‑acting FET is used for the attenuation element in Fredenstein’s Reverse‑Mancini FET Architecture, which is supposed to minimise FET distortion. Make‑up gain is again provided by Fredenstein’s OPA2 discrete op‑amp coupled to a steel‑cored output transformer, and the module draws around 75mA from each of the rack’s power rails.

The Comp Plus, like its predecessor, is an effective, versatile and pleasingly transparent compressor that responds quickly and cleanly.

As with the original, the top rotary control adjusts the input level over a range of ‑10 to +20 dB, and this sets the amount of squash as the compression threshold is fixed internally — higher gain gives more squash! Other knobs adjust the Ratio (2:1 to 20:1), Release time (70ms to 2.5 seconds), Make‑up gain (0 to +20 dB), and the Mix (blending the direct and compressed paths for parallel compression). An LED gain reduction meter covers a 16dB range in 1dB steps up to 8dB, with 2dB steps the rest of the way. A Clip LED above the meter lights when the output reaches +24dBu (actually 2dB below hard clipping). 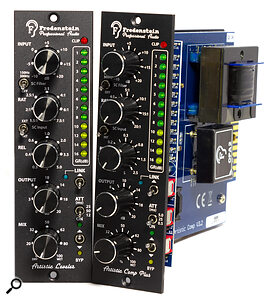 The two dynamics processing modules, Comp Plus and Leveler, share the same livery and control set — making them look incredibly similar in the rack!Four of the miniature toggle switches are the same as on the original module. These introduce a high‑pass filter into the side‑chain (with turnover frequencies of either 150 or 300 Hz), adjust the attack time (0.5, 5.0, or 25ms), activate a hard (relay) bypass, and enable side‑chain linking to one or more other compressor modules, assuming the rack is configured appropriately. These last two switches also have status LEDs. There’s no status LED for the new side‑chain toggle switch, though, which is a shame, since the compressor won’t work if accidentally set to Ext without an external input connected! I spent quite a few moments trying to figure out why one review unit appeared not to function at all when its sibling was working normally. A status LED would have made that user error instantly obvious.

Nevertheless, the Comp Plus, like its predecessor, is an effective, versatile and pleasingly transparent compressor that responds quickly and cleanly and offers a good range of controllability. One of its great strengths is the Mix control, which makes parallel compression trivially simple to achieve. The side‑chain high‑pass filters are also useful in determining how the compressor responds to kick drum and bass content in a mix. In an ideal world, there might have been an automatic recovery‑time mode, and perhaps a gentler ratio than 2:1 for subtle bus compression, but as a general‑purpose tracking compressor module the Comp Plus has a lot going for it — especially if you have a rack that allows you to use it’s auto‑ducker feature.

Some of my Comp Plus wish‑list entries are satisfied by the Artistic Leveler module, which is equipped with an almost identical set of controls (to the point that distinguishing the two modules is not simple). The main difference between the Leveler and the Comp Plus is that its attenuation element is an opto cell instead of a FET, so it inherently has a gentler and smoother response. The Ratio control also has a slightly different range, from 1.5:1 up to 7.5:1, but everything else, including the external side‑chain access, side‑chain filters, and all the other control parameters, is identical. Make‑up gain is provided by the same OPA2 and transformer combo, too.

While it’s tempting to think of an opto compressor as being somewhat languid, the Artistic Leveler can actually be persuaded to react quite briskly, if required. But its real strengths undoubtedly lie in gentle bus or vocal compression work, using small ratios.

The final module supplied for this review is a fairly straightforward three‑band equaliser, based once again around a single OPA2 gain block driving the usual steel‑cored output transformer. All three EQ sections have rotary controls for cut/boost (±14dB range) although, sadly, there are no centre detents to aid locating the flat position. Additional rotary controls adjust the centre/corner frequencies for each band. The high section spans 2 to 20 kHz, the low section 30 to 300 Hz, and the mid‑section 300 Hz to 3 kHz. High and low sections can also be switched individually between shelf and bell responses, but there is no provision to adjust the filter Qs (bandwidths), and the actual Q values vary with the selected operating frequencies. 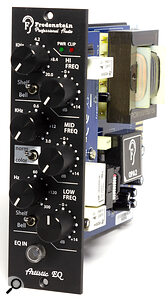 The Artistic EQ includes a switchable Color distortion circuit.LEDs at the top of the module indicate the presence of power (the module draws 70mA from the rack’s power rails), and warn of impending clipping (lighting at +24dBu which is 2dB below the actual clip level). An illuminated button at the bottom of the panel provides a hard (relay) bypass, and an extra toggle in the panel centre selects a Color mode. As with the MixPre Plus, this introduces level‑dependent harmonic distortion, with higher input signals generating stronger effects.

This EQ module is simple and straightforward, easy to configure, and sounds pleasingly musical in use. Although the band ranges don’t overlap much, they do cover the whole spectrum sensibly and serve well for general tonal shaping.

The two enhanced Artistic MicPre Plus and Comp Plus modules present genuinely useful updates, while the Bento 8 Pro rack is a solid performer with useful facilities — although quite why the company would choose to omit their bespoke Aux I/O functionality eludes me! The other modules in the range are equally well‑designed and effective, and I remain impressed with the quality and versatility of Fredenstein’s Artistic series of 500‑series modules, which offer impressive value for money.

The Fredenstein modules and rack are competitively priced, well‑built, have nicely judged facilities and features, and perform remarkably well.