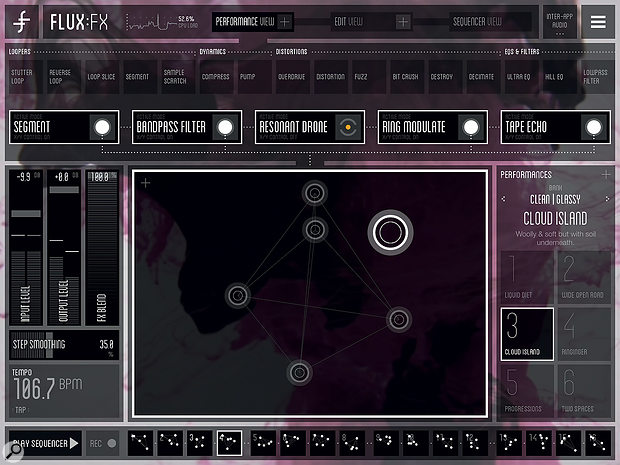 Up to five effects can be chained together and their pad motion automated by the step sequencer.

Flux : FX is an ambitious iOS effect processor created by guitar legend Adrian Belew and two teams of developers. It’s compatible with Inter-app Audio and Audiobus, and has been tested with a wide range of iOS audio interfaces and core-USB compatible hardware.

Set against a classy-looking, smoky purple background, Flux : FX provides a chain of up to five versatile effects, each with an X-Y pad for performance access, plus a step sequencer for capturing pad motion. I opted to run it from within Audiobus, piping a drum machine (Funkbox) into Flux : FX and leaving it running as I explored. I found the factory banks to be an impressive introduction, each bank containing six Performances (sets of stored effect chains, sequences and pad assignments). These are chosen from categories such as ‘Clean/Glassy’, ‘Dirty/Nasty’, ‘Ambience’, etc, and should provide instant assurance your App Store visit wasn’t in vain. At the simplest level, select any Performance and move a finger across the pad to hear what it can do. Things get wilder when you record this motion into the sequencer. 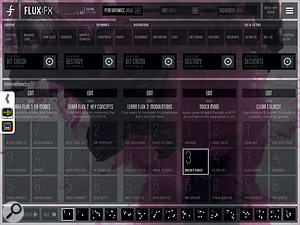 The factory banks offer everything from hippy ambience to utter sonic destruction.The user interface is dense but beautifully crafted. At the top of the screen are three views: Performance, Edit and Sequencer, and from the first of these, you set the input and output levels plus the FX Blend — the balance between raw signal and pure effects. Beneath these sliders is a handy tap-tempo function so you can synchronise time-based effects with incoming audio. Incidentally, some functionality is MIDI-controllable at this stage but a more extensive implementation is due in a future version.

Each of the five possible effects may be set to active or touch mode, the latter requiring you to touch the pad before the effect is heard. With so many on offer, I’ll quickly list them and give an equally quick summary of several favourites.

The effects are as follows: 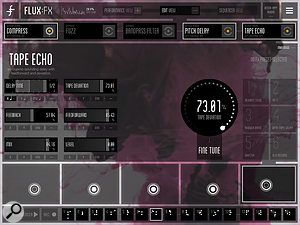 Flux : FX’s tape echo effect.An effect is introduced by dragging it into one of the positions in the chain, all the while keeping an eye on the CPU Load indicator. Multiple effects can be controlled simultaneously by the main X-Y pad, but you can tweak them independently by switching to the Edit View screen where five smaller pads are found, along with each effect’s three most significant parameters. The full range is accessed behind a deeper edit option, which keeps everything neat and full-sized on the GUI. It’s in the deeper screen that you map parameters to the pad for manual performance and sequenced tweaking. Impressively, this process includes upper and lower limits for each parameter, tailoring pad behaviour with some precision. As you adjust any value, it is immediately reflected in the large Fine-Tune dial, enabling better control than sliders permit.

While it would be impossible to describe all the effects, there’s not a turkey amongst them. Whether you start with the simple but effective Pump (it does what you think) or the wibbling ring modulator, abstract experimentation is never far away. I particularly loved the pitch delay with its ascending feedback. Though it won’t out-freak my Eventide Pitch Factor, it makes an incredible first stage in a complex effect chain, perhaps followed by one of the loopers. These, too, are ideal for mashing incoming audio, down to the granular squeal level of ‘Segment’ or the mad, repeats served up by ‘Stutter Loop’.

The delays (and reverb) could be enough by themselves to justify ‘killer app’ status and the maximum delay time is a generous five seconds. In just one example, a single effect combines reverb with delay and thus gives two effects in a single slot. Equally eyebrow-raising, the eight-voice chorus, 24-stage phaser, or the ringing short delay of Resonant Drone all shine individually, but multiplied in a chain they become something else entirely.

All this rather assumes your iPad can cope, but even in this respect I was pleasantly surprised. My iPad Air handled compression, distortion, a low-pass filter, tape echo and delay reverb with a CPU load slightly over 50 percent. Running the sequencer and indulging in a spot of X-Y pad action had it peaking at almost 70 percent, but even this gave no evidence of struggling. In typical use, CPU was lower than that figure but there were times it maxed out. On one occasion, all the effects packed in completely; the solution was to reload the Performance. Overall, Flux : FX felt pretty robust.

The third main window is ‘Sequencer View’, which provides an overview of recorded pad motions or a means of adding them step by step. Sequences can be up to 64 steps long and, if you don’t set the sequencer running, can be treated as a series of snapshots to call on any time. To avoid absolute repetition, the sequence includes a Randomizer, which introduces small (or large) variations on each pass. Finally, the Fluxing button randomises the X-Y pad values across all steps. Depending on the effects you have loaded, this could be the sickest trick yet.

Flux : FX acts like a twisted, multiple-personality, sometimes resource-greedy Kaoss pad. You’re advised to run it on an iPad 4 or better and even then alongside as few other apps as possible. Its talents when harnessed by Audiobus are a delight, not least because you can capture the effected output into another app. Sweet though this is, Flux : FX paired with an audio dock of some kind could be most popular as a hardware audio processor. It neatly shunted aside (and outgunned) my Korg Kaoss Pad 3, for example. The manual states that more effects are in development, but there aren’t any gaping holes at present. This is a professional-feeling, imaginative effects processor with an interface as slick as they come. For me it’s the one by which others will now be judged. If your iPad enthusiasm has ever flagged, Flux : FX might just be the app to give it a new lease of life.