With variable power and software control this tube amp seems to promise all things to all guitarists. Does it deliver the goods?

In the two years since I reviewed the first and rather splendid amp in Hughes & Kettner’s TubeMeister series, this German–designed, China–manufactured range has become extremely popular with gigging and recording guitarists alike. The programmable GrandMeister 36 flagship model is now available, and it combines four distinct channels, onboard digital effects, 128 presets and valve amplification with MIDI and iOS control capability.

The Body Of The Beast

Stylistically, the GM36H features the familiar H&K black-and-silver cabinet and the blue–illuminated clear plexi panel that not only carries the control legends but also shows off the amp’s valve–laden interior. Architecturally, the GM36H is a single–input amplifier with four different, switchable, gain–based, and differently voiced channels, namely Clean, Crunch, Lead and Ultra. A Boost switch adds a fixed amount of additional gain to each voicing, to give you a total of eight possible sonic starting points.

The extensive I/O complement includes Hughes & Kettner’s well–regarded Red Box DI and cabinet simulator, and there’s an integral powersoak too.Since only one channel can be active at any time, the amp’s other front–panel controls are common to all channels. Gain, which can be turned off, sets the input sensitivity and therefore the saturation level in the preamp. The control that’s labelled simply ‘Volume’ acts in a different way than you might think, in that it merely boosts or cuts the level of the preset you’re working on relative to other stored presets; it does not control the overall volume of the GM36H — that’s the role of the Master Volume. Having got your basic sound character set up, you can move on to the GM36H’s classic passive, interactive, three–band EQ, the frequency ranges of which are optimised for the four channel-voicings. The Presence and Resonance controls in the Master section are independent of this EQ.

The Gain, Volume and EQ knobs have secondary functions, accessed by depressing the FX Access push button, in controlling the Delay and the modulation effects (Chorus, Flange, Phase and Tremelo) that make up two of the three onboard digital effect modules, the third being Reverb which has its own level control. The FX Access button forms part of a bank of four push buttons, two of which put the rear panel’s mono FX Loop and the variable–threshold Noise Gate into the circuit. The last, which sits in the upper left quadrant, stores the settings of every front–panel control except the Master Volume into the current or selected preset location.

The front–panel control complement is completed by the Master section, which acts on the GM36H’s output stage and carries the Resonance, Presence and Master Volume controls. In its 12 o’clock position, the Resonance control gives what H&K describe as the ‘normal’ amp/cab interaction. Turning down the Resonance damps the speaker and cabinet resonance to give a looser sound, while turning it up produces a tighter, punchier low end. Presence is not an EQ control, but is said by H&K to control the amount of harmonic overtones produced by the GM36H, which I take to mean that it is doing what it should do in a valve amplifier, sitting in the negative feedback loop, decreasing the feedback at higher frequencies (where harmonic overtones are present), and thereby increasing their presence in the amp’s output. Although the Resonance and Presence settings can be stored separately in individual presets (Preset Mode), the pair can be put into Global Mode together where, as with the Master Volume, they become non–programmable and affect every preset equally.

The left–hand half of the GM36H’s rear panel is occupied by MIDI In and Out/Thru ports; the FX Loop send and return jacks; a Line Out jack designed to drive a slave power amp on those occasions where the GM36H’s wattage needs some enhancement; the sensitivity control for the Noise Gate; and the Red Box DI XLR and its two-position Cabinet Type push switch.

To the right of centre sits the four–LED and plectrum–operated switch of H&K’s proprietary Tube Safety Control (TSC) that monitors the status of the GM36H’s four EL84 output valves and allows you to check the bias matching. TSC also operates in conjunction with the four illuminated push–button switches sitting next to it that control the GM36H’s output power. With all four switches out (ie. non–illuminated) you have the amp’s full 36W. Engaging the first switch to reduce the power to 18W causes TSC to shut down the outer two EL84s. The remaining three switches route those 18W into increasing amounts of resistance to produce 5W, 1W and silence at the speaker output jack. If no cab is plugged in, the GM36H switches automatically to Speaker Off mode.

In the very early 1980s, the US firm TUSC achieved spectacularly small success with a range of valve amplifiers in which the overdrive and parametric EQ levels of one channel could be stored in a single recallable preset using a switch–per–knob to define the individual control’s position. The GM36H uses a similar concept, if not the technology, in the proprietary Smart Rotary Controls that replace conventional knobs (with the exception of the Master Volume) on its front panel. First seen on the H&K Switchblade, these consist of 256 individual resistors, 256 switches and a memory capable of storing and recalling the position of every switch, and thus the setting of every knob. 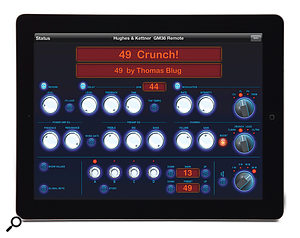 A free iPad app gives the user direct control over more parameters than are accessible via the amp head itself.

As well as the iPad app, Hughes & Kettner have made a dedicated pedalboard, though this is a cost option.To store a preset you simply dial up the sound you want and press the Store button, but recalling or selecting one of the 128 presets can only be done via MIDI, which means that a source of programme changes, such as a MIDI–capable floorboard, multi-effects unit or computer is required. H&K meet this need with two products: the catchily named FSM432 MkIII MIDI Floorboard; and the free GM36 Remote iPad 2 (or later) app. IK Multimedia’s iRig MIDI is recommended as the app’s interface, although any iPad–enabled MIDI interface should suffice.

Alongside enabling you to edit, store and recall presets in its internal memory or that of the GM36H, the iPad app allows you to adjust all of the GM36H’s programmable controls in real time. The FSM432 MkIII isn’t quite as slick, as its two external controller jacks (footswitches or expression pedals) only give you access to two controllers, whose numbers, unfortunately, cannot be stored individually with each preset. So, in the real world, you’ll be better off using the floorboard for preset recall and use the external controllers on functions such as volume level and boost on/off. Most conveniently, it can be powered from the GM36H via its supplied seven–pin MIDI cable.

The app enables you to display or edit any preset in either the app memory or the amp memory, switch between the two with the Memory Selector and instantly hear the results of editing the displayed preset through the GM36H. The Compare function not only allows you to check your edit against the original preset, but also shows you any controls where settings have been changed since last time you connected the amp to the app. It’s also fairly easy to move or reorder presets in either the amp or app memory. You can back up your amp and app preset memory at any time, but reloading an amp backup means you have to overwrite your current in–app presets.

The GrandMeister 36 turned out to be a seriously impressive little amplifier in all of its modes, at any volume level, even with the speaker off and the Red Box DI running straight into my console. There’s a seemingly unlimited variety of sounds available in the interaction between the Mode, Boost, Gain, Presence and Resonance controls; I could happily spend hours building presets for every possible situation I could imagine, from sparkly, shimmering clean sounds to the most OTT, drop–tuned metal distortion sounds, and all points in between. The amp’s three effects modules are extremely effective, but the reverb deserves a special mention. Should you run out of onboard options (you won’t!), there’s always the loop to add an external effects unit or preamp. The floorboard and app turned out to be a great combination to work with, the app allowing easy editing and the floorboard letting me recall presets without breaking the flow of my playing.

Soundwise, the GM36H delivers real bottom–end weight and mid–range punch, even at low volumes. I can’t think of any other valve amplifier that I’ve played through that has such a wide–ranging palette of sounds. I could also happily see it replacing my software amp suites for re-amping and recording duties, a scenario in which its sounds could be recalled and controlled from your sequencer.

The GrandMeister 36 is priced against some very fine conventional valve–amp heads, and there are also some excellent digital modelling amplifiers around, but you get an awful lot of bang for your buck. I’d take the GrandMeister 36 over any digital modelling amp I’ve heard to date, because it has that edge of reality and excitement that modelling amps just don’t give me. In fact, the potent combination of performance, portability, versatility and ease of use make it one of the most attractive and playable amplifiers that I’ve ever encountered, and it’s also programmable. If I had to choose a desert–island guitar amp, this could well be it — provided that I could take its floorboard as well!

I couldn’t find anything directly comparable to the GM36H, although a Mesa Boogie Triaxis, a power amp and a multi–effects unit would do the business at a much higher cost. The closest functional alternatives are probably modelling amplifiers, but these often don’t have valves, are mostly combos and are usually aimed at a lower price. The Kemper Profiling Amp Powerhead could be worth taking a look at — although that has no valves and costs a fair bit more than the GrandMeister 36.

Compact, programmable and capable of covering every sound from clean to distortion and beyond, the GrandMeister 36 is possibly the most complete electric guitar amplifier I’ve tried — and I’ve tried a lot! For the many guitarists who need a great–sounding, easy-to-use amp that can cover many musical styles but who don’t want to go down the modelling route, H&K’s GrandMeister 36 is the best choice that I can think of.