Can one guitar amp really meet all your needs, from night-time recording in your bedroom to rocking out at high volume on stage?

In recent years, there's been an explosion in the number of small, low-wattage valve guitar amps that are suitable for applications ranging from low-volume recording to on-stage use. Such amps, though, have been around for some time, and German manufacturers Hughes & Kettner (H&K) pioneered this market sector with their late '80s trio of one-watt 'micro amps', the Cream Machine, Crunch Master and Blues Master.

H&K have gained a reputation for meticulously engineered amplifiers with, to my ears, a clear, musical voice that gives their amplifiers real presence. They're no strangers to innovation either, having launched a number of 'firsts' in their 27-year history: the first all-programmable amp in 1985; the Cream Machine in 1987; the first DI box with a built-in speaker emulator in 1988; the first programmable valve guitar preamp in 1989; and so on... right up to the first valve amp with backup direct to memory stick in 2009. All of which means there should be plenty to look forward to in the company's latest take on the small-amp concept, the TubeMeister 18, which offers a huge amount of flexibility.

Designed and engineered in Germany but manufactured in China, the TubeMeister 18 is an elegantly restrained, Perspex-fronted, black and silver little number that comes complete with its own carrying bag. Four blue LEDs illuminate the front panel when power is applied, and the whole package is genuinely attractive to look at.

Despite its small size, the TubeMeister 18 weighs 5kg, most of which is accounted for by the input and output transformers. These flank its valve complement of two 12AX7s for the preamp stage and twin EL84s driving the Class AB push-pull output stage. Removing the bottom cover reveals PCBs of high quality, in terms of both components and construction.

There's a single-input, dual-channel architecture. Each channel (Clean and Lead) has master and gain controls and, although they share the same set of bass, middle and treble controls, the EQ filters are voiced differently for each channel. The front-panel Channel Select switch does what its name suggests, and its Lead Boost sibling re-voices the Lead channel to give a modern high-gain sound. There's little space on the front panel, especially with the input jack and power and standby switches in there as well, but the layout works well, and despite my large hands I never felt cramped when operating the controls.

The rear panel is less busy. A serial effects loop allows you to insert effects between the pre and power amps, tap the preamp signal off to a tuner or another amp, or use another preamp signal to drive the TubeMeister's power stage. There's a socket for the optional FS2 footswitch that overrides the Channel Select and Lead Boost switches, and a balanced, speaker-simulated XLR DI Out, from the integral Red Box DI. On the right you'll find the mains input socket, the output jack and — possibly the most important control — the Power Soak that tames the full 18W down to 5W, 1W or 0W, at which point the only active output is the DI. 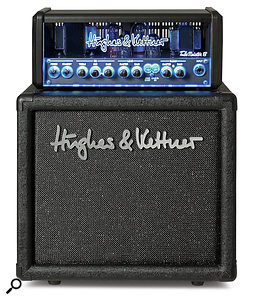 As well as the amp reviewed here, the TubeMeister range includes a 60W 1x12 speaker cabinet, which is rather nice in its own right!

Right in the middle of the rear panel sits a H&K innovation: the two LED indicators and pick-activated switch of the Tube Safety Control system. It's a fact of life that the modern valves aren't of the absolute quality of those made in the middle of the 20th century, and the Tube Management System (TMS) was developed by H&K to ensure that output valves are biased properly, that defective valves are shut down so that the amp continues to operate (albeit in reduced circumstances) and as a way of checking the ratings of the valves.

TSC adjusts bias to improve the amp's tonal and technical stability and extend power tubes' life, and it does this automatically. Bias is readjusted only when the amp is powered up and idling: it's disabled whilst you are playing.

The system not only prevents excessive current from overloading the valves, but also minimises crossover distortion. If a valve fails, TSC shuts the faulty valve down and an LED indicates the defect. Meanwhile, you can continue playing and the amp will get you through the gig.

You can check a valve's bias point and determine if pairs match any time you wish — all that is needed is a pick. The two side-by-side LED indicators are assigned to the corresponding output valve. TSC automatically indicates the valves' operating status as soon as you switch Standby off, to turn the amp on. The display's readout can also be activated manually at any time by inserting a plectrum into the slot.

The rear panel of the TubeMeister 18 head, where you can change the power of the output stage and access the Red Box DI output.

Perched on top of its matching Celestion Vintage 30 TM112 bass-reflex cabinet, the TubeMeister 18 certainly looks the part. With its gain set at 12 o'clock, the clean channel was wonderfully sensitive to playing dynamics, moving beautifully from clean to the beginnings of crunch depending on pickup selection, guitar volume and my picking weight. It didn't take me long to settle on a sound and control setting that gave me exactly what I wanted: a touch-sensitive clean sound that I could crunch up at will with pick and guitar.

For overdriven sounds you need the lead channel, and even there you always have the option to clean the sound up a fair bit by backing off your guitar's volume control or picking weight. The available range of sounds is everything you'd expect, from a heavy rhythm crunch, through singing, mid-boosted sustain into the area of heavy riffing, where this amp's ability to clearly delineate notes really comes into focus. Bring in the Lead Boost and you're into that higher-gain territory where scooped mids rule.

Versatile and wonderful though the two preamp channels are, it's the interaction between those, the channel master volumes, the power-soak settings and the Red Box DI output that make the TubeMeister 18 what it is. Winding up the master volumes on either channel brings output valve distortion (and speaker distortion) into play. The sound starts to compress, the amp becomes more involving to play on and you can balance feel and tone to suit your playing style and your sound. Though this only really happens at stage volumes, the beauty of the TubeMeister 18 is that you can use the power soak to cut the amp down to a more neighbour-friendly 5W or 1W, but keep the high-volume feel and sound in there, albeit with less of a contribution from the speaker.

The Red Box DI, fed pre-power soak so that its mic-level, speaker-emulated output carries the full weight of the output valve distortion, is the TubeMeister's secret weapon. With the internal speaker turned off it does a very respectable job indeed, and although it doesn't produce an absolutely perfect analogue of the sound of a real speaker it's better than many. Mixed in with a mic on the speaker it can form an extremely potent component of this amp's sound.

The TubeMeister 18 with the optional speaker cabinet is a very neat combination, whose full 18W is plenty enough for a small gig. I'd probably end up running it at 5W, to keep the sound and feel that I found there, and use a mic and the DI output into the PA and monitors to get the volume that I needed. For practice and recording, as you might have guessed, the 5W setting was also my favourite. That's not to say that the 1W setting was bad — in fact it sounded and felt very good — but the 5W sound just worked that bit better for the way I like to play.

Recording through the Red Box DI output with the speaker output turned off worked well, and produced a very, very usable sound. Whilst an A/B comparison with a microphone on the speaker showed up the inevitable differences, listening to the DI in isolation didn't give me any cause for complaint. If you add some reverb and sit the sound in the track, you'll be pleasantly surprised at just how good the Red Box DI sounds.

The TubeMeister 18 sets a benchmark for this class of amplifier and it would take something very special to beat it. As its marketing slogan — "Rock on Stage, Play at Home, Record at Night” — implies, it's more than capable of rocking it out on stage, of being attenuated to a level that won't annoy family and neighbours and of being used in its 'silent' mode as a DI'd recording source. It offers genuine flexibility to the gigging and recording guitarist, with the bonus that the TSC system maintains optimum valve bias for tone and longevity.

The matching TM112 1x12 cabinet, with its Celestion Vintage 30 speaker is well-finished, solidly built and worth considering on its own merits. The two together give you a good-looking, great-sounding combo that, despite the price tag, offers real value for money. If you need an amp that could be stage, practice, or recording amp — or simply preamp — you need to take a really good look at the TubeMeister 18, and you could do worse than budget for one or two TM112s at the same time.

The Engl E315 Gigmaster is the most directly comparable amp. Laboga's The Beast follows close behind, but ignoring the built-in Red Box DI, the Egnater Rebel 20 with its 6V6/EL84 valve mix and 1-20W variable output offers similar versatility.

Hughes & Kettner's TubeMeister 18 and its matching TM112 cabinet are a handsome combination that delivers great sound on stage, at home or in the studio. The TubeMeister's selectable output level, FX loop and built-in Red Box DI give it the necessary flexibility to cover all these bases, and this amplifier sets a benchmark in its class that will be hard to beat.