Legendary PA brand HH Electronics is back, with a range of active speakers that employ the latest in sound-system technology.

Any musician of 'a certain age' will remember when HH guitar and PA amplifiers first came onto the scene, with their green back-lit front panels and slimline packaging — a dramatic contrast to the big, vinyl-covered valve amps of the time. Today, the brand is handled by Headstock Distribution, who have brought HH PA technology right up to date, to offer a line of products that cover the needs of musicians ranging from gigging solo artists to bands requiring a multi-kilowatt system. 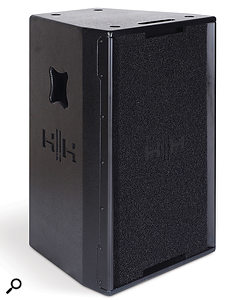 HH are keen to point out that most of the major components used in their systems are built in the company's own factory in China, with the design work being carried out in the UK. We're also told that extensive R&D goes into their cabinet design, including the optimal placement of hardware and bracing. Their drivers, meanwhile, employ modern structural approaches such as the use of Kevlar- and fibreglass-reinforced cones, high-grade magnetic materials and high-temperature, edge-wound ribbon wire coils. Wooden cabinets are used (these still tend to sound cleaner than plastic moulded enclosures), and most of their systems follow the 'sub plus two-way top' approach, as that seems to be the best way to make a compact system that can still handle a sensible amount of low end. However, where a system needs to handle mainly vocals, the 'tops' can be used without a subwoofer.

HH's Tessen series of active front-of-house speakers, including those reviewed here, use lightweight, switch-mode power supplies and Class-D amplifiers for the mid-range and subwoofers, teamed with more conventional Class-AB amplifiers to power the high end. The range includes 1 x 12-inch and 2 x 12-inch tops, plus twin 15-inch and 18-inch subwoofers, in both active and passive versions.

Of the top cabinets, we chose to review the TNE 112A, the single 12-inch model, which is compact enough that a pair can fit into a typical hatchback. Like all Tessen systems, it employs cast-frame woofers with long-excursion ribbon voice coils and impressively large magnet structures. U-Sonics Power Cone build the cones specifically for HH, employing glass-fibre reinforcement to add stiffness without excessive mass. The HC 557J 12-inch, cast-aluminium-chassis driver in this model carries a massive 2.5kg magnet, with an edge-wound 78mm coil, while a horn-loaded compression driver with 1.4-inch aperture, fitted with a 50mm titanium dome, provides the necessary power handling at the top end. A maximum SPL of 126dB (calculated) is specified. The implication of the 'calculated' qualification is that power compression caused by heating of the drive units when they're working hard may reduce this value in the real world. 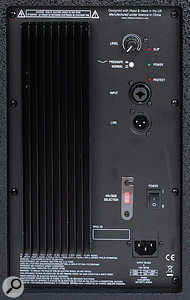 The TNE 112A top cabinet features a link output XLR, an input gain control, and a switchable 'smile' curve EQ preset.At first glance, the physical design of the cabinets is somewhat reminiscent of my own HK Pro speakers, in that they are also built from 18mm plywood, are finished with a textured 'orange-peel' paint coating, and use a foam layer over the speaker grille. The tops have a tapered shape, with the cabinets narrowing towards the rear, but they are not designed to be used side-on for monitoring, as the directivity of the horn would then be wrong.

Handles are routed directly into the woodwork rather than being added as separate fittings, a strategy that avoids protrusions which might otherwise cause damage during loading and unloading. This also eliminates the possibility of hardware working loose and rattling. There are four handles in all: one cut into each side and one each at the top and bottom front edges of the cabinet. The HH and Tessen logos are sculpted into the woodwork and the grille foam, and although the metal pole-mount socket is necessarily a separate piece of hardware, it is recessed into the bottom of the cabinet so that it can't scrape or catch on anything during transit.

This bi-amped design has 500 Watts of Class-D LF amplifier on board, teamed with 50 Watts of Class-AB analogue amplification for the high frequencies, fed from an active crossover and covering the frequency range 60Hz to 20kHz. The active crossover design includes EQ and phase correction to match the drivers, and there's both overheat/over-current protection circuitry and a limiter to prevent clipping.

The crossover includes a switchable EQ 'Pre-shape' button to allow the tonal character to be given a hint of a 'smile' curve, for DJ applications. When the button is out, the response is nominally flat. This button resides along with all the other controls and connections on the recessed metal rear panel, which also houses a shallow-finned heat sink for the power amps. A 'combi' XLR input socket accepts balanced or unbalanced jacks or XLRs, while the line-level link output is on XLR only. Input gain is set by a continuously variable pot, and there are three nearby status LEDs indicating clip, power and protection status. A voltage-selector switch for 110V/230V operation is protected behind a clear plastic panel, with the power switch and IEC inlet socket nearby. At 29.5kg, the cabinet is easily manageable via its handles, and if you have the urge to run out and measure the space in your car, each cabinet has an overall measurement of 644 x 400 x 420mm (HxWxD).

Sub Of The Day 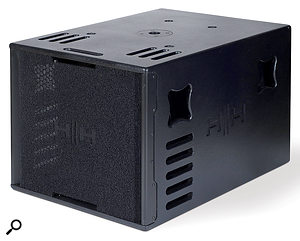 Covering the frequency range 40Hz to 250Hz, the 2 x 15-inch Tessen TNS 215A subwoofer is, again, powered by a 500W RMS Class-D amplifier and switch-mode power supply, which is how it is able to achieve a weight of just 37kg. An in-built limiter avoids the risk of clipping, and the maximum SPL (again, calculated) is 124dB. The HD 547H drivers are very substantial, each having 61mm edge-wound voice coils and 1.6kg magnets, while the cabinet itself is made from 18mm ply with internal bracing.

The TNS 215A's size of 484 x 540 x 750mm is achieved by mounting one 15-inch driver behind the other, in a so-called isobaric arrangement. The term 'isobaric', meaning 'same pressure', comes from the notion that the air pressure in the cavity formed between the two driver cones remains constant: both drivers move in the same direction, so the volume of air between them never changes. This principle has been used in many speaker designs over the years, and its main benefit is that it allows the cabinet volume to be minimised, though the trade-off is that an extra 3dB of input level is required to achieve the same level that a single speaker in a box twice the size would produce. The pressure between the drivers isn't quite as constant as theory would have us believe, however, as one driver is loaded by the closed box behind it and the other by the air in the outside world, but it serves as a suitable description of the driver arrangement and is a well-proven design.

In this particular implementation, the two drivers are mounted face-to-face on a baffle close to the front of the cabinet, with a spacer ring between them to allow the cones adequate unrestricted travel. Here, the frontmost speaker is in reverse formation, with its magnet side facing the grille, and this is clearly visible through a set of side slots. The signal phase is inverted for one of the drivers, so that both cones move in the same direction, and the inner driver is loaded by the sealed cabinet so, in theory at any rate, this arrangement should deliver sealed-box tightness rather than ported flabbiness. Though the front-to-back depth (750mm) is a little greater than for a typical 1 x 15-inch subwoofer, the frontal area is about the same and lifting is reasonably comfortable via the sensibly placed handles. You wouldn't want to carry it far without a friend, though! 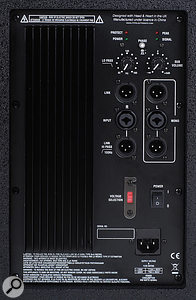 The rear panel of the TNS 215A, featuring left and right inputs and outputs, filter controls and polarity-invert switch.There are balanced stereo 'combi' jack inputs on the sub's rear panel, with both high-pass filtered (100Hz) and full-range stereo XLR link outputs. A variable low-pass filter (80Hz to 180Hz) is available, as well as a level control and a polarity-invert button. As with the tops, LEDs keep track of the operation status, with greens for power and signal present and a red light for clip and protect. The finish is the same textured-black paint as used on the tops, and the same acoustic foam over a metal grille protects the driver. Handles are routed into the cabinet, and pressed metal glides, rather than plastic feet, are fitted to the bottom of it, to promote good coupling with the floor. A socket at the top of the cabinet accepts a 35mm pole for supporting a TNE 112A top.

Combining one TNS 215A sub with two TNE 112A tops creates a relatively compact 1600W system capable of in excess of 120dBSPL under real-life battle conditions. Where more LF handling is required, adding a second sub brings the system power up to 2100W. Our review system was based around a single sub, and this proved to be more than adequate for typical band gigs in pubs and small to medium-sized clubs.

Many systems will produce the desired amount of volume, but sound quality can vary alarmingly between different makes and models. This Tessen system exhibits a slight horn brashness when heard up close, but this mellows nicely with distance, delivering a good overall tonal balance with well-defined mid-range, allowing voices to come over with a pretty natural sound, but still enough 'air' to help them cut through. Many '12-inch-plus-horn' systems suffer in the mid-range, where the cone and horn struggle to overlap gracefully, but HH seem to have pulled off the trick without too much in the way of compromise, given the price point of this system. Used on its own, the cabinet also manages to deliver a plausible low end but, of course, the level and depth of bass that can be achieved is less than when it's used in combination with a sub.

On hooking up the sub, I concluded that HH have got it pretty much right there too, because although it can deliver an impressive kick, it doesn't sound excessively flabby or out of control. A tight kick-drum remains acceptably tight and well controlled, and while a really high-end system may well sound even tighter, the Tessen works well in a real-life situation, adding solid support and depth to the bass guitar and kick drum. Importantly, by relieving the low-end load on the tops, adding a subwoofer enables the system to go noticeably louder when handling full-range material.

Given its very attractive pricing, robust construction and sound quality, this HH Tessen rig seems well suited to bands doing the pub and club circuit, but it should also appeal to DJs, as it handles recorded music in a very capable way. For smaller venues, or where drums and bass don't need to be amplified, the tops could easily be used on their own. My only slight concern is the physical depth of the sub, which might pose some transport challenges if you travel by car and may also cause placement challenges in some venues. My own Fohhn 15-inch sub is much smaller, lighter and even tighter sounding, but then it does cost significantly more. On the plus side, the cabinets are fairly easy for one person to lift using the well-placed handles, and a doddle for two people to carry.

Ultimately, every sound system is a balance of compromises, but when you weigh up price, performance, size, weight and build quality, this HH Tessen system is actually pretty hard to beat.

Alternatives include HK's Premium Pro range and SR Technology's Stage Line range. A comparable system could also be made from Mackie's HD1221 and HD1501.

Good-sounding active PA speakers that perform well for their price range and are solidly built, yet easy to move around.