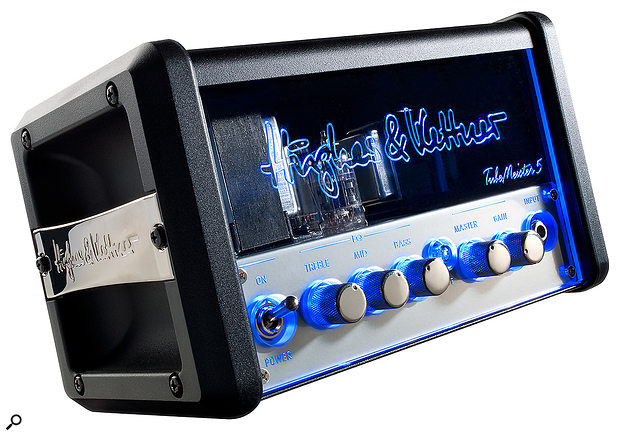 Following the success of their Tubemeister 18, Hughes and Kettner have spun off a low-power variant, the Tubemeister 5.

Retaining the original's trademark blue-illuminated front panel, knobs and aesthetics, this new amplifier eschews the single-ended, Class-A convention common to this class in favour of a push-pull output based around a rather uncommon dual-triode valve, the 12BH7. Developed in 1953 as a frame oscillator and vertical deflection amplifier for cathode-ray television screens, the 12BH7 was picked up by the hi-fi fraternity as a preamp valve. It is essentially equivalent to a 12AU7 (ECC82), but is capable of handling higher plate currents, and has a higher maximum plate dissipation and a slightly lower plate resistance. If you're into DIY valve amps, you'll find a fair number of preamp and power-amp circuits featuring the 12BH7 on the Web.

The Tubemeister 5's single channel references the 18's Lead channel in layout, with a 3-band passive EQ, Gain and Master knobs and the illuminated Drive switch, which revoices the EQ and increases gain to give higher levels of distortion in the preamp. Also carried over from the 18 is a devotion to squeezing as big a set of transformers as possible into the package, to allow for higher dynamics in the amplifier.

On the rear, you'll find the mains socket, a single speaker jack, the in/out switch for the built-in dummy load (which switches in automatically if no speaker is plugged in) and the balanced XLR output of the Tubemeister 5's Red Box DI. The combination of dummy load and DI means that you can send the power stage into a speaker cab and/or straight into the mixing console, in both live and studio settings.

Plugged into my favourite THD 2x12 speaker cab and my mixer, the Tubemeister 5 acquitted itself well. With EQ flat, the Drive switched out, Gain cranked up and the guitar's volume control dialling in the required amount of preamp crunch and distortion, the 5 got into the sonic territory normally occupied by smaller, push-pull, 6V6–equipped, American amplifiers. Power-amp distortion is set very effectively by the Master control, and there's a lot of subtlety available in balancing guitar volume with the Gain and Master.

Switching in the Drive delivered a thicker, modern-sounding, high-gain distortion, although I was left with the feeling that the Tubemeister 5 wasn't nearly as successful as the Tubemeister 18 in conveying the bottom-end weight of a bigger amp.

Overall, the Hughes & Kettner Tubemeister 5 is an aesthetically attractive, diminutive 5W amplifier that won't annoy the neighbours, and that sounds pretty good through a cab or a DI. Available as a head (with or without its matching 1x10 Celestion-equipped cabinet) and as a combo with a Celestion 8-inch speaker, the Tubemeister 5 is well worth a listen. Since commercial 12HB7-powered amplifers aren't exactly common, you might just find that it delivers the sound you've been looking for.