I've been using FXpansion's BFD drum software for many years now and, although the competition has intensified, BFD2 remains one of the best dedicated drum/percussion instruments available. That's due, in no small part, to the number and quality of specialist expansion libraries available from both FXpansion themselves and from third parties, such as Platinum Samples. The latest such release, FXpansion's Zildjian Digital Vault, combines three previous products that somehow never graced the pages of SOS on their own. For me, the cymbals were the major weakness in the original versions of BFD (v1.0 and v1.5). The sounds weren't badly captured or programmed, but they seemed to have been aggressively topped and tailed, presumably to make the software play nicely with the less well-specified computers most people used at the time. Although this deficiency was addressed by the XFL and Deluxe expansion libraries (among others), and later with the release of BFD2, when it came to cymbals, none of these products gave much in the way of choice. This, of course, is where the Zildjian Digital Vault comes into play. 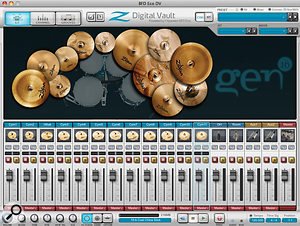 This collection comprises a gut-busting menu of carefully sampled Zildjian cymbals, including hi-hats, rides, crashes and splashes. In total, there are four A-series, nine K-series and 11 'FX' cymbals. Even though you're limited to Zildjian cymbals (I'd love to see a single library with a range of Zildjian, Paiste, Bosphorus and other makes included), there's an impressive range of pieces with which to augment your kit. The whole gamut of cymbal sounds is catered for too, with stick, brush and mallet hits all included, and even some cymbal-bowing. In terms of sonics, the recordings all appear to have been cleanly captured, and everything sounds as crisp and clean as you'd expect, judging from the name-checked gear list published on FXpansion's web site.

This library is not available on DVD, which is a shame: there are five separate files to download, at over 2.5GB each, which is fine for fast broadband connections, but some people will be waiting all night for the downloads to complete. Thankfully, once you have the files, installation is painless, and online authorisation easy; there's no tedious re-entering of serial numbers, for example.

I tested the library in BFD2, both by triggering it directly from a Roland V-Drums kit and by programming parts in Cubase, and can confirm that these cymbals are both eminently playable and programmable. (You'll need a suitably low-latency interface and buffer setting to play and monitor such drum sounds live.) Not only should you be able to find suitable cymbal sounds and articulations for most tracks but, like most BFD instruments, each piece has been carefully mapped with multiple velocity layers and multiple hits per velocity layer. The result, whether you're programming or playing, is a really expressive instrument that responds beautifully to note velocity. If the prospect of playing or programming intimidates you, though, there's also a welcome smattering of good MIDI loops. And given that so many drummers effectively beat out time on the hi-hat before placing other parts into the mix, the usefulness of those loops in faking real drum parts should not be underestimated.

All in all, this is another very useful, high-quality addition to BFD2 or BFD Eco (though not BFD 1.x). If you're dissatisfied with the cymbals in your current BFD library and aren't too strapped for cash, the admission price is definitely worth it. Matt Houghton