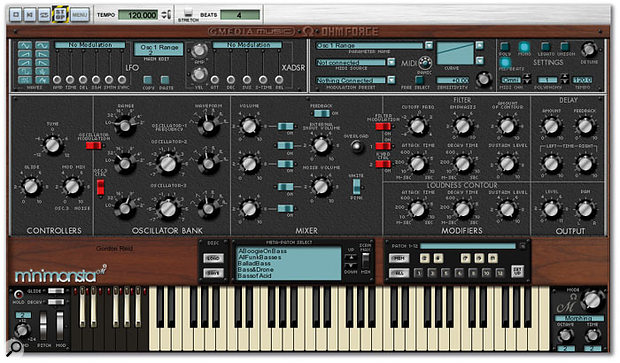 Forget completely flexible software synthesis — what everyone wants, it seems, is emulations of 35-year-old monophonic analogue synths! We check out the latest modelled Minimoog, and see how it compares to the original hardware.

It's a decade since the first, tentative steps were taken, but the craze for digital synths that emulate vintage instruments continues unabated. The past few years have seen intense activity in this area, with a virtual ARP Odyssey, an ARP 2600, an Oscar, a Yamaha CS80, an MS20, a Polysix and at least three virtual Minimoogs from Arturia, Creamware and Gforce. What is it about the Minimoog that inspires this degree of reverence? It can't be the facilities, because these are limited, both in terms of sound generation and performance control. No... as we all know, it's the sound. Even today, this remains unsurpassed, and if today's technology can recreate the sound of the Minimoog and couple this to the facilities we've come to expect in the 21st century, we'll have reached some sort of musical Shangri-la.

Before getting stuck in, there's a nomenclature issue to deal with. Although everyone I've spoken to about it always refers to it as Minimonsta, properly speaking, Gforce's Minimonsta is a joint development between Gforce and French plug-in developers Ohm Force, and its full title is the Gforce Minimonsta:Melohman (there's plenty on the Melohman part of the instrument later in this review). However, for reasons of simplicity and length, I'll be referring to it as Minimonsta throughout this article.

Even the briefest glance shows that Minimonsta is much more than a simple reincarnation of the Minimoog. The central section represents the original, but this is surrounded by numerous new control panels, the functions of which are not altogether obvious. So we'll start by considering those parts that emulate the Minimoog itself...

The Oscillator Bank offers three oscillators, all of which range from 32' to 2' (±8 semitones for Osc2 and Osc3) and have a 'Lo' setting for low-frequency duties. And, as on the hardware Minimoog, Osc3 doubles as a modulator, with routings via the Controllers section to the pitches of all the oscillators, as well as the filter cutoff frequency.

As always, the way to test the sound of these is to open the filter as far as possible, ensure that filter emphasis is at a minimum, defeat any modulation, and create 'organ' envelopes for both the filter and audio amplifier. This then allows us — as far as is possible on a fixed architecture — to analyse the sounds of the oscillators themselves.

I set up my original Minimoog, serial number 11285, next to the Mac I was using to host the software synth and, on both instruments, set Osc1 to a ramp wave at 8', with the level in the Mixer (which we'll come to, later) set to '5'. I then matched their pitches and output levels and compared them... Hang on. Which is which? If I didn't know which hand was playing which keyboard, I wouldn't have had a clue! The first two graphs below demonstrate this; the equivalence is clear. 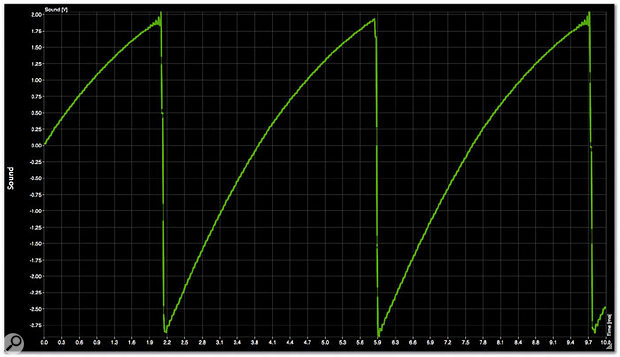 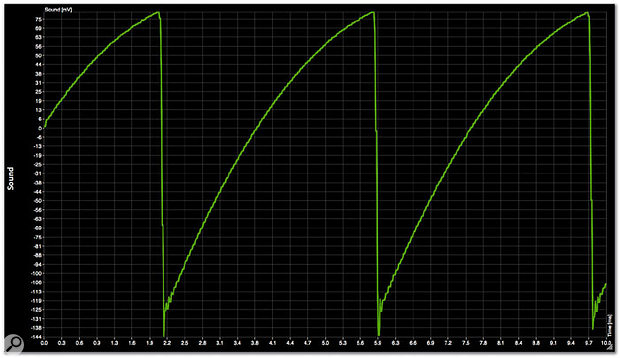 The same level of accuracy is exhibited by the triangle, mixed triangle/sawtooth, square and pulse waves. At all pitches, these proved to be all but identical to my Minimoog. Unlike Arturia's Minimoog V, Minimonsta does not allow you to alter the width of any of the pulse waves, either manually or by applying modulators, but the only fault I could find (and it's trivial) is that the waveform of the ramp+triangle on Minimonsta appears to be inverted, as you can see from the remaining two wave traces below. 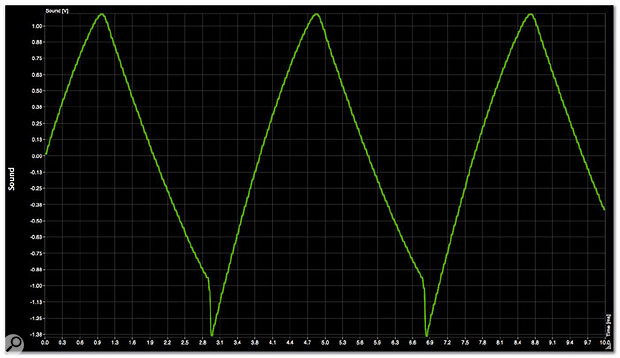 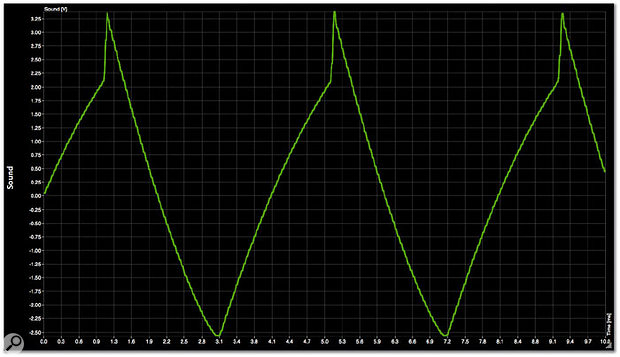 The ramp+triangle wave generated by the real Minimoog.

I also compared the noise generators of my Minimoog and Minimonsta. For both settings — white and pink — Minimonsta generates a much 'redder' spectrum than the original synth, with a greater low-frequency content. This is a little disappointing, because without a high-pass filter, it is impossible to match the sounds of the two, but, in the real world, I doubt that it matters too much.

The outputs from the three oscillators, the noise generator, and any signal applied to the external signal input are combined in the Mixer section. On the original, high signal levels allowed you to overdrive the filter input to create a slight, but 'warm' distortion. Observing Minimonsta's output demonstrates that this too generates a subtle distortion at high levels, without the need for any power-hungry compression or overload functions.

Encouragingly, setting two oscillators — say Osc1 and Osc2 — to the same waveform and almost identical pitch and then switching one of them on and off a few times demonstrates that the oscillators are 'free running'; each time that you switch the second oscillator on, the slight beating between the two begins at a different point in its cycle.

As you can see from the screenshot later on, you can make use of Minimonsta's External Signal Input in a VST environment. In the example shown, Minimonsta, Gforce's Mtron and Korg's Legacy Polysix are all loaded within my chosen VST host, Plogue's Bidule. I was able to play everything from my MIDI controller keyboard, and the result (including the summing of the stereo inputs to mono) was just as you might expect. If, for any reason, you wish to disconnect the MIDI signal from Minimonsta, you can still pass the external signals through it by pressing the Hold button in the performance panel, and playing a note on Minimonsta's on-screen keyboard to open the Gate.Minimonsta also recreates the old trick of looping either the Minimoog's High or Low output back into the External Signal Input. Only the High loop is emulated here, so the input is easily overloaded, and feedback dominates the sound unless you set it up carefully. Sonically, the results are dramatic, and you can generate all manner of dark and radical sounds this way, but if I'm honest, I found the sounds not quite as pleasing as the ones I can coax from my hardware Minimoog.

Minimonsta's filter copies the Minimoog's, so there are knobs for cutoff frequency, emphasis (filter resonance), amount of contour applied, and the ADS[D] contour generator. To the left are three switches that apply keyboard tracking at rates of 0 percent, 'a bit', 'a bit more', and 100 percent, plus modulation (supplied by the Controllers...