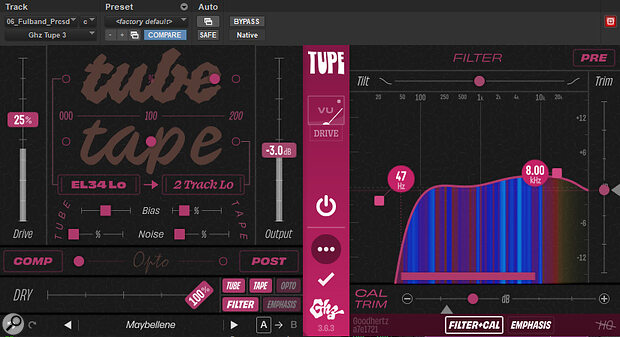 As the name implies, Tupe emulates both tape and tubes — but it goes a bit further than most other saturators.

Since I reviewed Goodhertz’ plug‑in range in 2018 (www.soundonsound.com/reviews/goodhertz-plug-ins) I’ve used their tools often, especially when I want something ‘a bit different’. I particularly like their Wow And Flutter tape emulation, so was very happy when I learned of their latest release, Tupe, which combines the much‑loved sound of analogue tape machines with — you guessed it — the much‑loved sound of vacuum tubes (valves). As if that weren’t enough, the core functions are joined by a generous set of creative processing options, including Goodhertz’ take on a vintage opto compressor.

The GUI’s Tube section allows you to choose one of eight different tube flavours, and the manual offers a detailed explanation of each. Some are modelled on simple preamp or signal tube circuits, others recreate the sound of entire amp stages with multiple tubes and transformers, and some don’t mimic real‑world signal chains at all, but were created in ‘the Goodhertz Lab’. The Tape section treads a similar path, offering an initial choice of four tape types. You can decide whether the audio hits the Tubes or the Tape first, and have the option of bypassing either section and/or the opto compressor. As well as a master Drive control, there are slider controls that allow you to crank the tape or tube sections past their Normal (100 percent) setting up to a maximum 200 percent, for more saturation. Bias and Noise sliders allow further character tweaking.

As with most Goodhertz plug‑ins, an additional section accesses more advanced features. Emphasis controls determine which frequencies are most affected by the saturation, while a more traditional EQ offers bell and tilt filters. Lastly, a High Quality mode improves the sound at the cost of more CPU cycles.

I used Tupe on a number of mixes and liked what it did in various scenarios. Flicking through the tape and tube choices gives you distinct tonal options, and I found them refreshing compared with other tape emulation plug‑ins I’ve used. There are also presets that mimic the sonic characteristics of some classic records and you shouldn’t be tempted to dismiss this as a ‘throwaway’ feature — it’s a fun and handy way to change the personality of a source quickly while you get to know the features.

This is digital doing what digital does best, whilst offering some of the most authentic analogue sounds I’ve heard to date.

On a mix bus, Tupe did a very convincing job of mimicking the sonic character of an expensive hardware tube processor that I had in for review at the time, and on a drum bus it worked superbly for ‘pulling in the edges’ of the cymbals and generally creating a unified, cohesive drum sound. I also had great success creating a deliberately ‘blown‑out’ bass guitar part and some vintage‑style vocal effects, with a little help from those presets.

The filters can have a huge effect on the tone and removing large chunks of the frequency range produced particularly dramatic results on a programmed drum part. The compressor is styled on a famous ’60s optical device and if you use this with care you’ll find that it’s a worthwhile addition. On drums especially, it does interesting things to the transients that I didn’t immediately appreciate until I hit bypass.

Some may find the layout a bit ‘funky’ but there are dark (pictured) and light (white background) modes, and you soon get used to it. I do like that there are no fancy tape animations or worn‑paint graphics; you just move the sliders and use your ears. In my book, a good plug‑in should sound great straight off the bat. It should have usable presets for quickly changing the character of a sound, as well as extra features that allow you to dig deeper as you get to know it. Tupe ticks all those boxes: this is digital doing what digital does best, whilst offering some of the most authentic analogue sounds I’ve heard to date. From creating the effect of a cranked guitar amp to subtle mastering duties, it does the job of pretty much every saturator in my plug‑in folder and more besides. In fact, the only downside was having to decide what I liked most, given the sheer number of options!

A very usable tape‑plus‑tube emulation that’s easy to use straight off the bat but also allows you to dig that bit deeper when you need to.