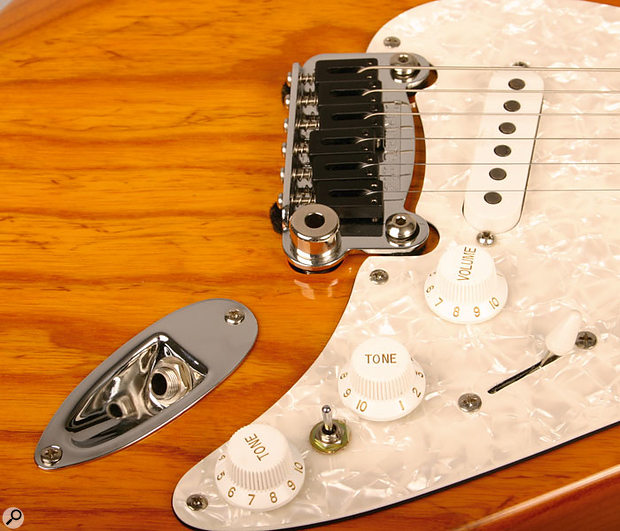 Graphtech are well known for their innovative guitar accessories, and you may recall that we featured their String Saver bridge saddles in the October edition of Sound On Sound.

The Graphtech Ghost pickup system is a more ambitious beast, designed to provide an acoustic sound from an electric guitar (via piezo-equipped bridge saddles) and a feed for MIDI guitar devices that conform to the Roland 13-pin interface standard. As I was already familiar with the principle of using piezo pickups to obtain acoustic-like sounds, I was keen to test the performance of the Ghost as a controller for my Roland GR33 guitar synth system.

It is possible for users to retrofit the system to existing guitars, though as with anything that requires drilling or permanent changes, anyone unsure as to their skills in this department may prefer to engage the services of a professional guitar tech! At the heart of the system is a set of custom-made piezo crystals, encapsulated in a set of Graphtech's low-friction String Saver bridge saddles. The designers claim that these exhibit a natural degree of compression that is very similar to the way an acoustic guitar responds, eliminating the nasty 'quack' that this type of pickup often produces. As each bridge saddle (from £99.95 for the set of six) has its own pickup, all you need is the right electronics to get a six-channel feed that can drive a guitar synth or another compatible device. The Ghost pickups are individually calibrated, which means that when you buy a set they should be well balanced across the strings. A list of replacement saddles for different guitar types can be found on the Graphtech web site, www.graphtech.com and while the focus is on more commonly occurring models, particularly Strats, they seemed more than willing to help with an enquiries about rarer models. 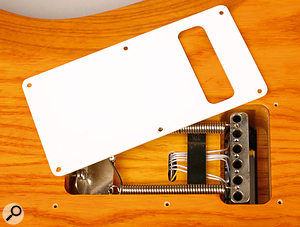 The system includes a piezo/magnetic mixer to give more control. It also features an automatic battery off sensor, which avoids the need for cumbersome PSUs (though where a Roland or similar device is used, the system is powered directly via the 13-pin cable). The Hexpander preamp board, a key part of the system, incorporates a harmonic damping system that is claimed to improve tracking. All the parts of the system are available separately so that users can create their own custom setup, but to use a Roland or Axon guitar synth, you'll need the piezo saddles and the Hexpander preamp. You may also benefit from the optional Quick Switch that switches between the guitar and hexaphonic pickup. Further useful options are a sprung, momentary-action program Up/Down selector switch, and of course a Hexpander volume control. Additional tonal controls are available for those who want to use the pickups both for guitar synths and pseudo-acoustic playing and there's also an optional wiring harness to produce a summed piezo signal.

One novel feature of the system is Graphtech's Traktion switch. This alters the tracking curve to optimise the pickups to the guitar and the player's style, and the compatibility list includes the GR33, Roland VG88 & V-Bass, Roland GI20 and Axon's 100TM.

The boards themselves are actually fairly small. It is thus reasonably easy to fit all this extra stuff inside your guitar, and extra routing to the body cavities may not always be necessary. The Acousti-Phonic (£79.95), which offers mono-blend/stereo-split, magnetic and full-range piezo output, and Hexpander (£229.95) can be mounted one above the other to save space, should they both be required, and the optional controls simply plug in, so you may not even need to do much in the way of soldering. 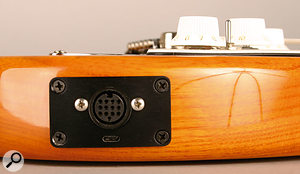 As with any hexaphonic system, it is essential to set the sensitivity for the individual strings on the guitar synth in order to get optimal tracking without false triggering. The review system was supplied ready fitted to a nice G&L guitar, though the strings looked a little overdue for retirement! My first task was to set the picking sensitivities for the different strings, which I did in the same way as I would for my GK2A-equipped guitar. What I found was that single-line picking was fine, but when I played two or more notes together there seemed to be some occasional dithering between notes, which to me suggested crosstalk between the pickups. I also felt that the strings weren't as evenly balanced as they should be and that they were also very sensitive, even to gentle picking pressure, when the meter readings on my GR33 said they should be about normal. I suspect that the faster attack response of the piezo pickups probably isn't registered accurately by the Roland GR33's sensitivity meter.

When I dropped the sensitivity by a couple of notches, and fine-tuned the string balance by ear using a piano sound, the situation improved dramatically. So it appears that you should set the string sensitivities lower than you normally would, showing peak picking levels perhaps halfway across the meter. Once set up in this way, the tracking was as good as, if not better than, that offered by my GK2A pickup, and there was much less of a tendency for the sounds to re-trigger accidentally when I lifted my fingers off the strings. From an ergonomic point of view, it is also nice not to have that weirdly shaped GK2A pickup sticking into your hand as you are playing!

Whether the improvement is worth the cost of fitting depends on how reliant you are on guitar synth technology, but it makes good sense if you need the pseudo-acoustic piezo sound as well. In spite of the price, there's no arguing against the fact that this is a very neat and visually unobtrusive system that really works well once you've taken the time to adjust your guitar synth carefully.  Paul White

SUMMARY This is a very well thought out system that can be retrofitted to most guitars and works very well once set up properly. It isn't cheap but it is effective and it doesn't ruin the look or finish of your guitar.

Clip-on guitar tuners have been around for a while, and when they first appeared I found them a frustrating experience, usually promising more than they delivered, particularly where leakage from other instruments caused interference and made them impossible to use! Intelli's latest, the IMT 500, is a big improvement on what I have seen to date in this category. 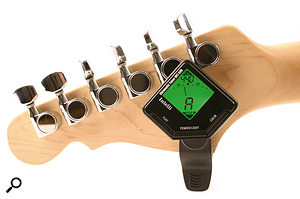 The diamond-shaped unit itself is tiny and fits easily in the pocket. There is a very bright green LED display which makes for easy reading in the dark — in a moody live room, or on stage, for example.

I suspect it has been designed primarily with live use in mind, and it excels here. It is very discreet: not only is it small, but it clips on to the headstock, and the swivel mount head means that you can hide it from the prying eyes of the audience, even when the bright green LED is lit. I found that I could even leave it fitted to a guitar if I was carrying it in a suitably sized soft case. I experienced no problems with sound leaking from other instruments and, with no need for cables, this makes tuning between performances — or sharing tuners amongst forgetful band members — a doddle.

However, I've also found it to be a very convenient tool in the studio. As with most modern tuners, the IMT 500 detects the nearest note and you can tune to it. But you can also calibrate the tuner so, for example, you could tune it to a slightly off-key instrument you happen to have recorded in advance. I can't count the number of times I've had bassists, guitarists (or even lutenists!) turn up for recording without a tuner and with their instrument in tune only relative to itself — that is, the intervals are right but it isn't tuned to the standard pitch. While there are obviously alternatives, various rackmount, pedal and software effects amongst them, I've found that the size, the portability, and the lack of cables makes this tuner so much more convenient. It works well on acoustic or electric basses and guitars, and I see no reason why it would fail to work equally well on other plucked-string instruments. At £19.99 including VAT, it represents great value and it will come as no surprise that this has become a standard part of my kit. Indeed, I've now parted company with my old pedal tuner, and the only quarrel I have with the IMT 500 is that its portability means I've sometimes had to remind people to hand it back to me!   Matt Houghton

SUMMARY The Intelli IMT 500 packs great functionality into a tiny box. It is equally at home on electric and acoustic stringed instruments and in spite of the size, the bright LED means it is highly visible, which makes it great for both studio and live use. At £19.99 including VAT, it's also a bargain!

Following success with their Spider II range, guitar modeling experts Line 6 have announced the Spider III range of amps, cabs and combos. Encompassing everything from 15W practice amps to the HD150 head and 4x12 cab, the Spider III range offers something for players of all ability (and loudness), at reasonable prices. What's more, the higher-end amps (the 75, 120, 150 and HD150) have over 200 built-in presets from some of the world's greatest players and bands, along with 150 song-based presets; these include 'boys r back', 'hardaysnight' and 'anotherbrick' — you get the picture! 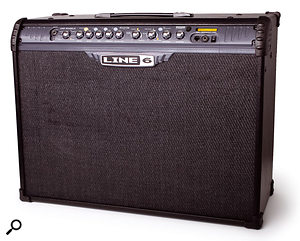 Lower-end models (the 15, 30 and HD75) have four amp presets, a range of effects — two of which can be used simultaneously — feature a mini-jack input for MP3 or CD players, and have a headphone output that can also be used as an output for recording without a mic. All Spider III amps and combos have a footswitch jack that is compatible with Line 6's range of foot controllers.