What does the current crop of premium control surfaces have to offer? Read our round-up to find out.

The Raven MTX breaks the mould somewhat, by having no physical faders at all — almost all DAW control is accomplished via its enormous, high-resolution touchscreen. Indeed, the multi-touch control-surface element could reasonably be thought of as a gigantic iPad, especially because it essentially uses its own custom 'app' to send control messages to your DAW. This software layer allows for extensive control of your mixer, transport functions, plug-ins, and even audio editing. 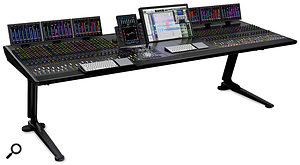 In addition, the Raven MTX offers extensive analogue monitor control of up to 7.1 surround-sound systems. Cue-mix and talkback facilities are also present, and the console even incorporates some laptop-style 'grot-box' single-driver speakers for checking the compatibility of your mixes with bandwidth-limited systems.

The Nuage adds a significant hardware element to Steinberg's music and post-production DAW Nuendo. In addition to the extensive control-surface functionality, it can be fitted with multi-channel I/O interfaces, which make use of the Dante protocol. 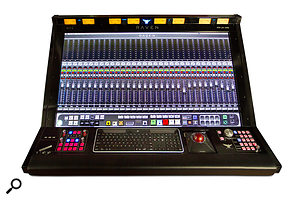 On the control side of things, two modules are available: the Nuage Master, which houses a multitude of editing and transport buttons, a jog dial, a 'channel-strip' set of rotary encoders and a colour touchscreen; and the Nuage Fader, which features 16 motorised faders, two encoders per strip, LCD screen channel displays and a touch slider, which understands smartphone-style gestures and can be used to navigate between channels and channel banks. Up to three Nuage Fader modules can be paired with a Nuage Master for a 48-fader control surface — the price above is for a 16-fader system, including a 'blank' workspace module, 16-I/O interface and Dante networking card.

Designed exclusively for Avid's Pro Tools systems, the S6 supplants the earlier Icon control surface as Avid's flagship studio centrepiece. It uses the Eucon protocol — a network-based DAW control language that Avid acquired when they bought Euphonix — and its surface can be configured according to the user's needs. 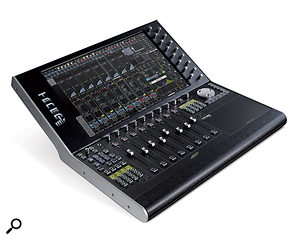 Much like a large-format console, the S6 comes in different frame sizes: the M10 frame allows for a maximum of 24 faders, while the M40 supports a whopping 64 (the price given is for a basic M40 system with 16 faders). As well as the eight-bank Fader Modules, the desk can be fitted with Knob Modules (eight-by-four rotary encoder units), Process Modules (these feature 22 function buttons that determine what the Knob Modules are controlling), and Display Modules. This last one is only compatible with the M40 frame and provides extensive metering and waveform display of individual channels. Then there's the Automation Module, which features transport control, a jog dial, a numerical keypad and a single 'focus' fader.

Although it's intended for use with Pro Tools, the S6 system can also control third-party DAWs, including Logic, Sonar and Cubase.

The Tango 2 combines a large colour touchscreen with a generous selection of tactile controls, including eight motorised faders and 27 rotary encoders. The controls automatically assign themselves to DAW parameters, while the screen graphics change according to what you're controlling. The screen can also be switched to display the video output from your computer. 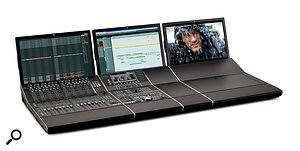 Communication between the Tango 2 and a computer is achieved via Ethernet, and the controller is compatible with most major DAWs, as well as various video-editing packages including Final Cut Pro and Sony Vegas. A 12-fader extension module is also available, and up to four of these can be connected to a Tango 2 to create a 56-fader control surface.

Computers have all but taken over the recording and mixing processes, and there's arguably little need for a large-format analogue console in the studio these days — but the need to impress clients is still very much alive...

In days gone by, you knew you were at a 'proper' studio when there was an enormous analogue mixing console in the control room — usually an SSL, or perhaps a Neve or an API. Not only were they a mark of how seriously the studio owner took their business (at the time, the largest consoles would cost tens, if not hundreds, of thousands of poundsdollars), but they were also essential for serious recording work. In combination with the type of tape machine the studio had, the size of the desk dictated how many channels could be recorded and mixed, as well as how many individual foldback mixes could be catered for. So for big jobs, such as film-score recording or ambitious rock projects, a large-format console was pretty much a necessity, both from the client's point of view, and for the studio, in terms of attracting customers.

Automation For The People

Another advantage that some consoles had — in particular, SSL models from the '80s onwards — was the ability to automate and recall settings. 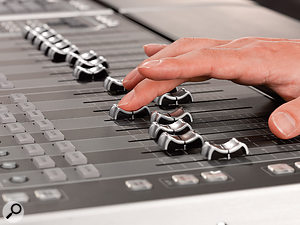 For the man in a hurry, sometimes only faders will do... Before the advent of console automation, if you wanted to be able to revisit a mix at a later date, someone would have to painstakingly make notes of every setting on the mixer, including fader levels, EQ, compressor and gate parameters. Clearly, this was very time consuming, so when it became possible to store these settings at the push of a button, clients realised that, even though they were paying a premium to work in an 'SSL room', they might actually save on studio time by being able to recall mixes automatically.

A Thing Of The Past?

Nowadays, of course, these once-exclusive features are ubiquitous. Even a modest laptop can record and mix hundreds of channels at a time, and saving a mix is as easy as hitting Ctrl+S. But for a number of reasons, many people still insist on working with real, physical faders and knobs. It's not just Luddism: mixing with a mouse limits you to adjusting just one parameter at a time, whereas the mixer paradigm of having a large number of controls dedicated to specific functions means you can be adjusting an aux mix with one hand, while balancing a handful of faders with the other. So a large, full-featured control surface could, again, save clients time, which is especially valued in the post-production world where score and dubbing mixes need to be completed to tight deadlines. It's no coincidence that both Avid's and Yamaha's new flagship controllers are aimed as much at the post-production world as they are at recording facilities!

Though the control surfaces on the previous pages are far from cheap, studios with the budgets to accommodate them will appreciate their value in terms of their ability to attract clients. And fortunately for those of us with deeper pockets and shorter arms, there are many lower-cost alternatives available from the likes of Mackie, Avid, Behringer, and even SSL. So even if you're not running a multi-million-pound facility, you can still impress local bands with your flashing lights, rows of buttons and motorised faders.