You’d be forgiven for thinking the world doesn’t need another expensive vari-mu compressor. But you might just be wrong...

I’ve been fortunate to look at a number of high-quality valve compressors for SOS in recent years, and I’ve become hugely appreciative of what a well-designed vari-mu compressor, in particular, can bring to my work. I’d even be prepared to stick my neck out a little and say that I feel that it’s one of the few remaining flavours of outboard processing that software can not yet faithfully emulate. I didn’t need much persuasion, then, to try out another designer’s means of manipulating the humble vacuum tube to control and enhance our audio!

Highland Dynamics, based in LA, were formed by Bryce Gonzales who, after working with Lisson Grove building their AR-1 compressor, branched out to work on his own designs around a somewhat similar theme. The BG2 is an all-tube, fully transformer-balanced design and is described as having the front end of a British-modified Altec 436 and an output stage in the style of an RCA BA6A or Gates levelling amplifier. Some of these ‘heavyweight’ vintage designs are known for bringing highly revered qualities to a recording or mix session, but they can also be something of a one-trick pony (though what an excellent trick!). What the BG2 seemingly promises is the flavour of a number of vintage units in one versatile unit, and all with the added bonus of increased headroom and controls to suit a modern workflow.

As you’d have every right to expect at this price, the BG2 benefits from a no-compromise approach regarding the components used throughout its all-tube, custom-transformer-balanced design. On the outside, I like the fact that this compressor is not trying too hard to look like something else — key to this are the distinctive-looking white graphics, complete with the designer’s name, set on its slightly mottled, dark-grey, metal front panel. This, combined with the physical weight of the unit, gave me a good feeling straight off the bat. The large valves sticking out the back of the unit just added to the feeling that I was about to test a serious piece of hardware.

Looking at the controls, then, the main action is bunched towards the left-hand side of the front panel, the most obvious being those large input and output knobs, sensibly located next to each other. As is typically the case with vari-mu compressors, gain reduction is introduced and controlled for the most part by balancing the input and output signal levels — the greater the input, the more the signal exceeds the threshold, and the more you’re likely to have to turn down the output level to compensate.

Another dial of the same size selects from six different release times, and a switch offers either a fast or slow attack time. There’s also a compression on/off switch, which allows you to turn the gain reduction off and use the BG2 simply as a characterful line amplifier. The controls for adjusting the input impedance and feedback are where things get a bit more interesting, and are the key to this unit’s wonderful versatility. The input impedance can be set to 150Ω or 600Ω, with the lower setting promising to offer not only more gain but also a more ‘coloured’ sound. The feedback control offers a choice between a ‘British’ mode, which promises a cleaner, more hi-fi sound and a touch less gain, and an ‘American’ mode, which introduces more harmonics and colour. Moving towards the right of the panel, we have a large, good-looking Simpson VU meter, controls for linking two units together, and a satisfyingly large on/off switch. The unit’s fuse can also be accessed via the front, which is obviously useful; some users would no doubt have preferred the rear-mounted meter-calibration pot to be similarly accessible when the unit is rackmounted.

I’ll explain how, during the review period, I found that the controls offered me usefully different ‘flavours’ when using this compressor with various sources, but first I’ll get straight to point — it sounded astoundingly good on vocals. I was working with a male singer who I’ve recorded quite a lot, and I often find I have to be very careful with how I compress his voice; it often seems to introduce a weird problem with some of his diction. When I patched in the BG2 on his vocal, paired with an older Neumann U87 mic, I was genuinely blown away by the results. It’s difficult to articulate this stuff in written words sometimes, but sitting between my monitor speakers it seemed as though someone was grabbing the vocal firmly with both hands and holding it just in front of the music. There were no harshness or sibilance issues, and I found that I had to use a lot less compression — only around 5-6 dB of gain reduction — than I normally would with a vari-mu compressor to get his vocal very firmly under control.

I was immediately seduced by the more colourful side of the compressor too, and soon found myself choosing the lower 150Ω impedance setting, with the feedback control set to the American mode. This really suited the vocals — so much so, in fact, that it was only when my client and I chatted over the mic between takes that I was aware just how much coloration was being introduced! It wasn’t at all subtle, and what I’d assumed would be a gentle saturation was bordering on more noticeable distortion — but in such a wonderful way. You certainly wouldn’t use this setting for a voiceover session but here it was marvellous!

On female vocals, I found myself preferring the cleaner-sounding British mode, with the higher 600Ω impedance setting. Things felt altogether more familiar using the unit configured like this; with the attack in its slow setting and with a medium release, it felt like the vocal was in the hands of a classic vari-mu compressor.

With the design heritage, and the controls available, you’d expect the BG2 to excel on bass guitar, and it didn’t disappoint. It was a breeze to get a bass guitar’s dynamic range under control, but it was the tonal versatility that really impressed me. By flicking between the impedance and feedback controls, I was presented with distinctly different tonal options that I could decide on according to which track we were working on. This is a fantastic bass compressor. 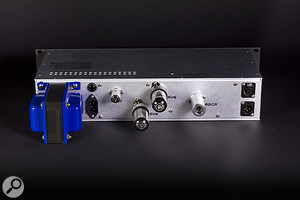 The tubes and the massive power transformer, as well as the meter calibration and analogue I/O, are all found on the rear panel.I had excellent results on a number of vocalists, and both acoustic and electric guitars, and I got a great ‘smashed’ room-mic sound for the one session I got to use it on drums. Not that it was a problem once I’d got used to it, but it’s worth noting that things often sounded that bit more compressed than the gain-reduction meter told me was the case — I quickly became accustomed to this, and it was normally just a case of deciding how much I dared compress it while tracking, as it usually sounded so good in any case.

As a reviewer, I have to ask what’s not to like. This is obviously not a transparent tool, and it thus probably wouldn’t be a great choice as your only compressor to use on a variety of sessions, but I don’t think most people seriously considering this would expect it to meet that need. I have only a couple of grumbles regarding functionality: first, I found that the level changed quite significantly when bypassing the compression, and I found myself not really bothering to use this to assess what the compression was doing; and second, the small change in level when switching between the American and British feedback options can no doubt serve to skew your perception as to which sounds better, drawing you towards the louder option. But given the gorgeous, effortless sound of this thing, I’ll happily forgive such minor misdemeanours.

For a small commercial studio owner like myself, every piece of gear needs to earn its keep on a regular basis, which means the acquisition of hardware of this quality, which naturally commands a high price, requires very careful consideration. But when you look around at other classic high-end vintage-style compressors, and consider both the tonal palette on offer and the uniqueness of the design, the price actually appears quite competitive. Which is all the more remarkable given that, in the humble opinion of this reviewer, the BG2 deserves to be considered amongst the heaviest hitters of the hardware compression world.

What impressed me most about the BG2 was its versatility, albeit within the confines of the vari-mu theme. In effect, you’re getting at least two different compressors in a single design, as well as a very effective colour and tone box. Also, unlike some other vari-mu compressors I’ve used — almost all of which excel on certain vocals and bass guitars — I found I had more freedom to shape the attack and release as I wanted. From a pure compression point of view, this made it more usable on a wider range of sources, like drums and guitars, than most such designs.

Having recently acquired some other vari-mus, I found it hard to justify acquiring this. But giving the review unit back after the review period was seriously tough. Indeed, I’m still considering trading in a couple of my other hardware pieces to get one for keeps! Parts that I recorded through the BG2 needed very little processing come mix time, and vocals in particular just sat wonderfully. If you’re in the market for a versatile high-end character compressor for tracking and mixing, I would strongly advise you to put the BG2 by Highland Dynamics on your shortlist.

There’s nothing directly comparable with the BG2, but there are plenty of other high-quality vari-mu compressors based on similar classic designs to check out, including Chandler Limited’s recreation of the EMI/Abbey Road RS124, the Lisson Grove AR-1, the Grove Hill Audio Liverpool, the Locomotive Audio Model 14b, the Retro Instruments Sta-Level, and the Phaedrus Audio Phamulus.

This vari-mu compressor draws on more than one vintage design to create something truly special — a processor which offers various useful tonalities, and effortless compression on a range of sources.