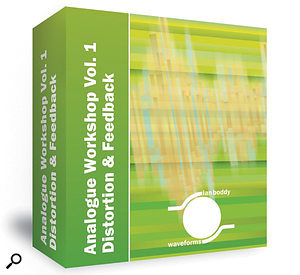 Electronic musician Ian Boddy has been releasing albums for almost 30 years and his sample collections have featured in the pages of SOS on many occasions. His latest work, Analogue Workshop 1, promises to be the first in a series of libraries, each one focusing on a particular aspect of modular synthesis. Workshop 1 covers distortion and feedback.

By some standards, the library is small, comprising only 300 samples, but it's priced accordingly. Users can either work with WAV files or access the material from inside NI's Kontakt sampler, for which the library provides a custom interface, complete with analogue synthesizer-style knobs and switches. Employing a virtual analogue synth to process sounds that were created specifically on genuine analogue equipment seems a strange thing to do, but having the option of using the library as the basis of a Kontakt instrument can't be a bad thing.

Kontakt owners can choose to use either the 'raw' unprocessed files or alternative versions that have already been treated by the custom interface's oscillator, filter, envelopes and effects. Anyone not using Kontakt has access to exactly the same basic material in the WAV Samples folder, although, by definition, those samples are untreated.

Ian has tried to keep things simple, dividing the content into six fairly self-explanatory categories: 'Drones', 'Feedback', 'Machines', 'Modulations', 'Noise', 'One Shots' and 'Transmissions'. Of the six, One Shots is the only one which contains subfolders of its own. The samples in 'Bass Drums, Hits and Percussion' are obviously intended to function as alternative drum sounds, either for use on their own or as a means of bolstering existing samples. The 'Events' and 'Nasty' folders, on the other hand, contain less drum-specific material. Their samples are still, for the most part, the sort that can be used in a rhythmic context, but are probably better thought of as gaming sound-design effects.

The other five main folders favour much longer samples of up to 30 seconds or more, which is time enough for the various filters, modulations and feedback patches to evolve.

Ian says his sounds are "not intended to be polite or necessarily easy on the ear,” while also pointing out that there are subtle and eerie patches too. His statement is pretty accurate, as there isn't too much here that would soothe a migraine. Sci-fi sound designers and techno producers are probably going to be the most interested, although it's easy to imagine many of the sounds being used in quirky indie-rock mixes as a means of adding aggression, interest and excitement.

There's also an audible difference between this analogue-derived library and those created predominantly using virtual instruments. Generally speaking, Ian's sounds have a subtle sense of depth and variety that is pleasingly retro. It would be wrong to say they are better because of that, but sound designers should definitely check out the online demos, as I'm sure they'll feel inspired by them. Tom Flint