With its compact dimensions, the Nano certainly lives up to its name, but does it live up to HK's reputation for quality sound?

HK Audio's various Lucas PA systems have established the smaller 'sub plus satellite' package as a viable format for gigging bands, but their latest offering lends a new meaning to the term 'compact'. The Nano 300 comprises a powered subwoofer plus two tiny satellites that either mount directly onto the sub, one above the other, or can be pole mounted to provide more height. Alternatively, the speakers may be spaced apart on optional tripods or mic stands, to provide a stereo spread. While almost certainly too small for typical band applications involving a drummer, the Nano seems well suited to solo acts or duos playing small pubs or bars, but the system also has applications in home theatre, sound for games, general music playback and, according to the manufacturers, even home-studio monitoring. It also offers an alternative to many of the acoustic guitar combos on the market as a means of amplifying an acoustic guitar and a voice — although you'll have to provide your own effects, where needed.

Portability is a big factor here so, when not in use, the satellite speakers stow away securely in a recess in the sub (retained by a pair of rotary catches), so there's only one box to carry into the venue — and with a total weight of around 12kg, it's an easy one-hand carry at that. A soft carry cover is included in the price. 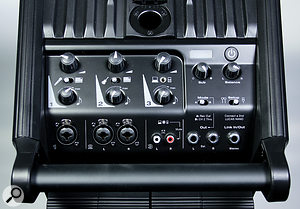 The subwoofer incorporates a three-channel mixer, jack outputs for the two satellites, a stereo line output, and a link in/out socket for connecting another Nano system.

The elaborately moulded polyamide subwoofer houses all the necessary electronics, including a three-channel mixer, yet measures just 390 x 300 x 420mm, including its integral top and bottom bar handles. A perforated grille protects the driver, and the mixer is built into the back of the top panel. There's also a pole-mount socket in the top panel, plus a clip for the satellite, which incorporates a pair of electrical contacts to carry the signal. This is not unlike a larger version of a camera 'hot shoe', as used to mount a flash gun. A similar connector joins the two satellites when they are used vertically stacked.

If the speakers are used on stands, they must be fed from a pair of output jacks located at the top edge of the sub's rear panel. Mating jacks are fitted to the bottom of each Satellite, along with a threaded mic-stand-type mounting point. To lock the satellites to the top of the sub, it is necessary only to engage the mount, then slide the satellites forward. If both satellites are stacked directly on top of the sub, the integral connector system completely does away with the need for interconnecting cables. When the two satellites are stacked for mono use, the vertical dispersion is slightly tighter than when using them spaced apart, though the stack is too short to operate as a true line array.

An on-board Class-D power amp pumps 160W into the sub, while the diminutive satellites are allotted 35W each. On a visit to the HK factory earlier in 2012, I saw a pre-production version of the system, with cutaways that revealed a very complex moulding for the satellite speakers, aimed at maximising efficiency and eliminating resonances. The cutaway moulding showed resonant chambers claiming to boost the mid-range efficiency by 6dB, augmented by an acoustic lens in front of the driver to control the dispersion.

A large power button and equally large power light are located at the upper right-hand side of the mixer panel. The light comes on red for a second or two while the system powers up, then it turns green to show that all is well. If a fault occurs, or if the built-in limiter kicks in due to excessive level, the lamp flashes red.

By way of controls, there's a sub/top balance pot and a stereo balance pot, plus a link in/out jack that allows another Nano sub and its satellites to be chained, to create a larger system with six input channels. It is also possible to take a stereo feed from the Nano's own mixer to route into another sound system; for example, when you're using the Nano as an on-stage amp but a feed to the main PA is also required. These same outputs could also be used for recording a performance in stereo.

The mixer features three 'combi' XLR/jack inputs, but only the first of these is intended to accept a microphone signal (though it has a switch to select between mic and line level). There's no phantom power option. Input two has a pair of XLR/jack inputs designated left and right, with a switch to select between instrument and line level, while the third channel is fed from a couple of RCA phono sockets and is optimised for laptops, MP3 players and so on. All three channels have volume controls and a single 'contour' tone control, which seems introduce a mid-cut 'smile' character and to add a little brightness when advanced clockwise. Further switches select mono or stereo system operation and output mode. In output mode A, the whole mixer output is sent to the stereo out jacks, while in mode B only the stereo output of channel two is sent. The outputs are on balanced quarter-inch jacks.

With a cone diameter of around six inches, the sub features a hefty voice coil and large magnet, enabling it to produce SPLs of 116dB (or 118dB for brief peaks). The tops, which are based around 3.5-inch drivers, have a similar SPL capability of 116dB (120dB peak) per pair, all measured at one metre, which is impressive given that these satellites measure just 130 x 240 x 115mm and weigh only 1kg each! An overall system frequency response of 44Hz to 20kHz is quoted, the tops handling everything from 190Hz upwards. 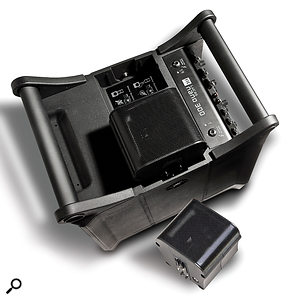 The two satellites can be clicked into the subwoofer's chassis, for easy storage and transport.

The Nano's bright and lively sound is balanced by a good impression of depth provided by the subwoofer, though I wouldn't recommend the system for studio monitoring, as it is designed to sound impressive rather than accurate. I would also avoid running it close to its maximum power level, as the sound can then get a little bit ragged, but when running within its comfort range it sounds pretty sweet, and still surprisingly loud for the size. You have to be a bit careful when using it with an acoustic guitar, as feedback can become an issue, especially if you have the sub level turned much higher than minimum, but as long as you're sensible about levels and your position relative to the speakers, it works fine and delivers a very usable tonality that can be fine-tuned using the contour control. Vocals also come across cleanly, though having such limited tone control can be a little frustrating at times.

The cost can seem a little steep for something so small, but the Nano is very well made and comes with a five-year warranty. (My only real concern is that the plastic mounting shoe for the tops could get broken if anyone bumped into the system.) Considering that dedicated acoustic guitar amplifiers also tend to be costly (and are often used for similar purposes), it might be better to judge the Nano in this context rather than as a 'not quite big enough PA system for a bit too much money'. By comparison, my similarly-priced Fishman Loudbox acoustic guitar amp delivers a rather more natural sound, both on guitar and vocals, and it includes both effects and an anti-feedback notch filter — but it is only mono. If you need to use more than one mic input with the Nano, you'll have to patch in your own mixer, and there's no built-in reverb or echo, as there often is in dedicated acoustic guitar amps, but on the plus side this is a stereo system. The Nano's versatility also works in its favour, as you can take it to gigs, then bring it home and connect it to your TV, computer or music player and put it to work in a domestic context.

My own view is that if you want a system only for gigging, you might be able to find better alternatives for the money, but if you need to it to double up on domestic duties, the Lucas Nano is actually a really practical solution.

As far as I know, the Nano is unique in being so small and portable, though it does compete head-on in terms of price and sonic delivery with many of the available acoustic-guitar amplifiers.

HK offer a number of accessories for the Nano 300 system, including a roller bag, which costs £89.99$129.99. There are also two add-on packages available, one comprising a pair of speaker poles, a tripod speaker stand and two speaker cables (£99$129.99), and another comprising a pair of satellite mounts, which allow the satellites to be hung on a wall or used on a tabletop (£59.99$99.99).

This is a very nicely thought-out and innovative little system, which really comes into its own when you have small-scale solo or duo gigging applications as well as further uses for it in the home.