Regular readers will be pretty familiar with IK Multimedia's Amplitube family of guitar‑amp and cabinet emulation programs, and despite the strong competition in this area, they continue to release unique and great‑sounding software. Amplitube Fender ($229.99£169.99) is the most recent addition to this stable, and as the name suggests, it models lots of Fender equipment: not only guitar and bass amps, cabs and combos, but also a range of effects and processors. 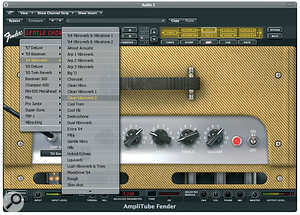 There's competition in this market from the likes of Peavey, Native Instruments, Digidesign and Softube amongst others, and most of these rival products include models of some of the better-known classic Fender amplifiers. However, this is the first software amp modeller to which Fender have given their seal of approval — by which I mean their trademarked name. Or, as IK and Fender prefer to put it, this is the first to offer "the world's most influential guitar and bass tones right on your desktop”. So, whether or not you agree with the bold claim about the Fender products that this software sets out to imitate, you'd expect this to be something pretty special.

Amplitube Fender is certainly impressive in terms of quantity, in that you don't just get the classic Twins, Bassmans and the like: you get an extensive range of models of Fender amps large and small, valve and solid-state. The common thread is that the modelled amps are all current products, although this includes recreations of some real classics. There are 12 models in all: a '59 Bassman LTD, '65 Twin Reverb, '57 Deluxe, '65 Deluxe Reverb, '64 Vibroverb Custom, Vibro‑king Custom, Champion 600, Super Sonic, MH500 Metalhead, Pro Junior, Bassman 300 and TBP1 Bass Preamp. There are also 12 cabinet models to complement the amps, and these can of course be mixed and matched. It's an impressive list, but although several of them are truly classic amp designs, I wouldn't agree with IK and Fender that they comprise "12 of the most influential guitar amps of all time”: I'm not sure that the Champion 600, retro-styled as it is, has been around long enough to warrant such a claim, and although it is a nice little amp, it's hardly the classic that the model which inspired it is. Inevitably, they've not covered every Fender amp, even in the current range, and I was disappointed to find out that they'd not done a model of, for example, the Hotrod Deluxe, which I see used a lot on stage, and is capable of a bright, brash, spiky sort of sound that I've yet to hear well executed in software. You can get close by using, say, a Pro Junior head with a larger cabinet and tweaking, but it would have been nice to see the Hotrod range represented, perhaps at the expense of less widely used models.

As with other Amplitube releases, there's a range of pedal and other effects, but this time they're classic Fender, with emulations of Fender's Fuzz‑Wah, Tape Echo, 63 Reverb, Phaser, Fender Blender and Volume pedals, and there's a selection of more generic rack gear, including a pitch-shifter, flanger, chorus and compressor (as well as the usual tuner). You get a selection of mic models, too, but I didn't notice anything interestingly new there.

If you already have IK's X‑Gear (which allows you to mix and match modules from the various Amplitube and Ampeg products), this will sound like a tempting proposition, as you'll be able to incorporate any of these modules into your existing setup. But if you want to start with Amplitube Fender and add others later, you'll be pleased to hear that you also get X‑Gear for free. X-Gear is a good, flexible system, my only real gripes being that you can't buy individual models separately (you might just want Amplitube Fender along with an Electro Harmonix Big Muff Pi model, for example — but you'd need to buy another complete version of Amplitube for that), and that the effects cannot be reordered by dragging and dropping, which is a pain if you want to insert a new effect at the beginning of the chain.

It's worth mentioning that there were a few bugs in the original release, which have been set right in the 1.0.1 update. This also improved CPU usage, apparently, although I didn't find this a big problem on the not particularly high‑spec MacBook Pro I was using for the review. 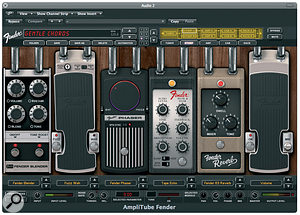 The new pedal effects modules in Amplitube Fender — although if you use them as shown here you'll probably want to use the last one to turn the level right down!

The quantity is there, then, but does it actually sound any good? To be fair, neither IK nor Fender claim that Amplitube Fender provides exactly the same experience as a real amp, merely that it is better than the software competition: "Never before have you been able to get this close to the real thing on your desktop”. I've yet to come across a software amp emulation which feels like the real thing while playing, but I've always found Amplitube's models to be amongst the better ones out there. More importantly, I've found them very usable in a re-amping/mixing context, where responsiveness isn't critical. It's the same situation here: Amplitube Fender doesn't offer quite the responsiveness of a real Fender amp, though it's not at all bad if played with low latency, but the sounds are excellent. You get a convincing emulation of real valves and speakers, along with nice organic-sounding tremolo and reverb effects — and it all sounds authentically 'Fender', too. Some competitors' models are the equal of some on offer here, but to my ears there's nothing else that offers both the same quantity and quality.

There are plenty of very usable presets, which make setting up to get a usable tone very light work, and the most convincing use a good dose of reverb and/or tremolo for obvious reasons. The '65 Twin Reverb in particular has some great-sounding presets. I was less of a fan of the heavily overdriven sounds, but that has more to do with my not being a huge fan of Fender amp distortion than a lack of accuracy. The mid-heavy, tweed-style tones come across beautifully, and the clean tones in general are as good as any I've heard in software.

With Amplitube Fender, the Amplitube family has come of age to offer one of the best and most comprehensive guitar amp and cab modelling packages around. It's a shame you can't add the pedal of your choice without using a third‑party plug‑in or investing in another full version of Amplitube, but other than that, weighed up against the competition, I have no major criticisms. If you aren't a fan of software amp modelling, I don't suppose this will change your mind, but I sincerely believe that you'd be hard pushed to hear the difference when the results are heard in a mix — which for my money makes this an excellent investment that is cheap at the price, considering the range on offer. Matt Houghton

Amplitube Fender builds on IK Multimedia's established Amplitube concept to offer some very desirable and very usable Fender amp and effect tones. Better in the mix than for playing live, but still one of the best out there.