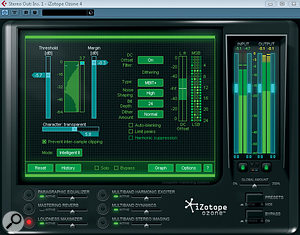 Izotope's flagship, all‑in‑one mastering suite was first reviewed by SOS back in the April 2002 issue, and version 4 was launched at the recent NAMM show with a list of new features and improvements.

At its heart, Ozone 4 is still based around the six modules found in the original release: Paragraphic Equaliser, Mastering Reverb, Multi‑band Dynamics, Multi‑band Harmonic Exciter, Multi‑band Stereo Imaging and Loudness Maximiser. The general operation of the plug‑in and its core modules has remained very similar through Ozone's development. Readers might, therefore, refer back to the original 2002 review (/sos/apr02/articles/izotopeozone.asp) for the basics, and I'll focus here on some of the key improvements in this release.

Ozone 4 benefits from a cosmetic overhaul — the look is now futuristic and generally very pleasing to the eye — but most of the key controls remain in familiar places, which is a good thing if you are upgrading. Looks aside, amongst a whole raft of changes and improvements are a redesign of the preset system; module‑level and global Amount controls; Mid/Side processing options for each of the three multi‑band modules and the reverb; a new mode for the Loudness Maximiser, with superior handling of transients; optional automatic gain adjustment when the Bypass control is applied; and 'K‑System' metering, which is based on ideas developed by Bob Katz. 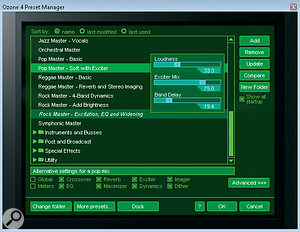 The Preset Manager can now be undocked and incorporates a degree of editing, courtesy of the excellent new Macro Faders.

The Preset Manager window can now be undocked from the main window, which is very useful if you are flicking through the presets and want to see what settings are applied to a particular module. Presets can now also be organised into folders, and the 100‑plus presets supplied are helpfully organised into folders such as 'Genre‑Specific Mastering' or 'Instruments and Busses'. This makes it much easier to find a suitable starting point or to organise your own presets.

Izotope have also built a degree of sound editing into the preset system via the new Macro Faders. When a preset is selected in the Preset Manager window, a number of faders are displayed that give access to the key controls for overall tweaking of that preset. For example, a Loundess Macro Fader might control the Threshold for the Loudness Maximiser while a Depth Macro Fader might alter the Band Widening controls in the Multi‑band Stereo Imaging module. Users can also create their own Macro Faders if they wish. This whole concept is really well implemented, and allows an easy route into simple editing.

The preset Macro Faders are not the only convenient new controls. The main window now includes both module and global Amount controls. These can almost be thought of as 'mix' controls that allow you to adjust the blend of processed and unprocessed sound, either just for a specific module (for example, allowing you to easily adjust the degree of processing that is applied by the Loudness Maximizer) or globally, through the slider just beneath the main I/O level meters. As with the Macro Faders, there is an element of convenience here, but these controls are also just plain useful to have. 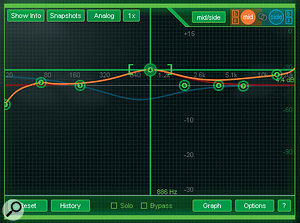 The Mid/side processing — shown here for the Paragraphic EQ — offers some interesting possibilities.

From a processing perspective, one of the more interesting introductions in this release is Mid/Side processing in the three multi‑band modules and the Mastering Reverb, which makes it possible to process the centre of your stereo image (the 'mid' element) and the material panned towards the left/right sides (the 'side' element) separately. Usefully, metering for the mid and side settings is displayed in different colours (orange and dark blue respectively).

This opens up some very interesting creative and corrective possibilities. The most obvious example would be when a lead vocal needs rescuing at the mastering stage (it shouldn't happen, but it does). The ability to apply separate EQ or dynamics processing to the centre of the stereo image allows the perceived level and character of the vocal to be adjusted while leaving the 'side' elements unaffected. This is sophisticated stuff and, while daunting for the novice, it will be welcomed by power users.

Taking It To The Max

Whatever your personal take on the loudness wars, Ozone's Loudness Maximiser can certainly deliver extra decibels, should you want them. Yes, pushed to the extreme, it can squash the life out of a mix and create a horrible, pumping, crushed end result. However, there is a lot of scope before that point is reached to add extra level without the processing becoming obvious.

A new processing algorithm — Intelligent II — is included in this release. This is optimised to preserve transients, meaning that they stay clearer even when more aggressive maximisation is being applied. This seemed to work very effectively when dealing with rock‑based material and, if desired, allows an extra dB or two of volume to be squeezed out before things get messy.

Also very welcome is the option to automatically match the overall gain when engaging Ozone's bypass option. Loudness maximisation aside, this can make it rather easier to judge the tonal and dynamic changes being produced by the processing, without the unprocessed signal sounding 'different' simply because it is considerably quieter. 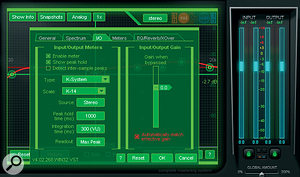 In testing with Cubase, Wavelab, Sound Forge and Acid Pro, Ozone 4 seemed very reliable and certainly didn't seem to place an unacceptable load on the CPU. Sonically, any improvements in the sound of version 4 compared to v3 are quite subtle, if you're mastering rock & roll in a typical project studio space without high‑class monitoring or amazing acoustics but, that said, I thought the presets supplied with Ozone 4 were a definite step up from earlier releases. In particular, the genre‑based mastering presets provide an excellent starting point based on the style of music you are working with.

While Ozone is primarily a mastering tool, it can also be used on individual tracks while mixing. Again, there are some excellent presets, and I found the various drum treatments to be particularly impressive. Placed across a stereo drum mix, the degree to which a fairly tame drum track can be turned into a raging rock monster is really impressive and would certainly be worth the CPU hit.

Ozone 4 brings all sorts of efficiencies in terms of workflow and makes things easier for the novice user via the excellent presets and features such as the Macro Faders. However, there is still an awful lot to learn. New DIY mastering engineers should take note, and make sure they do a lot of A/B comparisons to ensure that the processing is not being overcooked. And I'll repeat advice I gave when originally reviewing Ozone back in 2002: download and read the 'Guide To Mastering' PDF that is available from the Izotope web site, because it's excellent.

Master Of The Universe?

It is difficult to imagine what more iZotope might add to Ozone in terms of the degree of control it gives you over your audio, and I suspect that the potential of this plug‑in is more likely to be limited by the user's experience and monitoring environment than any shortfall in the features or quality of the processing within Ozone itself. There is more than enough to tempt existing Ozone users to upgrade and, at this price, those looking for a serious DIY mastering solution really should give the Ozone demo a spin. Just be prepared to put some work in so that you can get the best out of it. As a convenient, one‑stop, mastering solution, Ozone 4 is very hard to beat.

If you want to look at alternatives to Ozone, Mike Senior's T‑Racks 3 review in the April 2009 SOS is a good place to start. Other options include products from BIAS, Crysonic, Nugen, RN Digital and Sonalksis, though most bundles offering comparable functionality are more expensive than Ozone 4.

There are lots of very well-respected audio engineers who believe that the trend for 'hotter' mixes has had a negative impact upon audio quality and musicality. Bob Katz has proposed a metering and monitoring standard to counter this trend and intended to encourage some consistency between absolute levels when mixing and mastering for different musical contexts. Ozone now provides metering that is consistent with this 'K‑System' in its three different variants, K20, K14 and K12, which are intended for audiophile/classical music, pop/rock/folk and broadcast applications respectively. The numbers refer to the relative position on the meters of 0dB compared to full scale (that is, it avoids 0dB appearing at the top), encouraging the user to leave appropriate headroom. The meters also feature indicators for average and peak levels.

Reliable, convenient, cost‑effective and very powerful, Ozone 4 lives up to its billing as a complete set of mastering tools within a single plug‑in.