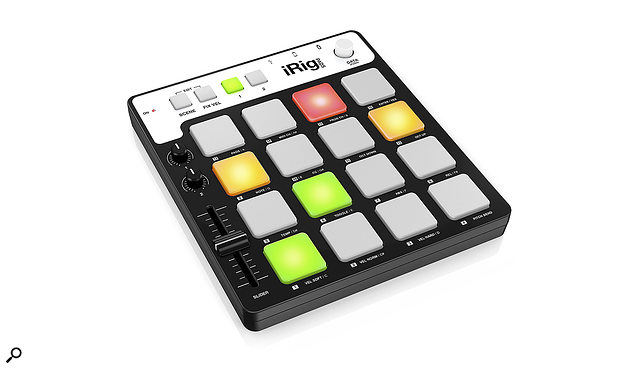 For ages I’ve had a craving for a small pad controller that I could use with my iPad, iPhone or laptop, so I was first in line at the SOS review cupboard for IK Multimedia’s iRig Pads. The remit was simple: it should be small and light enough to slip into a shoulder bag with an iPad or laptop, but still feel like a solid set of pads, not a toy or cheap gadget. The iRig Pads measure up well against these key requirements.

IK have made the right decision by not miniaturising the pads. The 4x4 grid is in fact larger than that on my Maschine, but as the pads take up most of the surface the overall unit is only a touch wider than my iPad 2. As well as the pad grid there are Scene and Edit buttons, a further two programmable buttons and knobs, a slider and a rotary encoder with push-button. On the back are two ports, one for connecting to iOS devices, and the other for connecting to a computer. Cables are provided for both eventualities, although the iOS cable is only for newer lightning connectors, which was a blow as I have an iPad 2. An optional cable can be ordered from IK for older iPhones and iPads, but this will set you back €$24.99. The computer cable is micro-USB, making it a bit easy to pop out or bend — in fact I broke mine. Luckily this is a standard cable and cheaper to replace.

On Test With Laptop & iPad

I tried the pads first with my Mac. The unit powered up with just a USB connection to a basic hub, which none of my other controllers can do and is really useful on a Mac laptop! No driver installation was required, and the pads showed up straight away in both Reason and Live. I was perfectly happy with the way the pads felt to play, so that was the most important thing ticked off the list. All was great playing Reason’s Kong drum machine, but in Live I quickly encountered a stumbling block: transposing the grid to different note ranges is slow and fiddly. Unlike Kong, Live’s Drum Rack instrument is not constrained to 16 sounds, and if you want to play non-drum instruments, an octave-and-a-bit range doesn’t cut it. I hoped the two spare buttons on iRig would be Octave Up/Down switches, but in fact to shift requires you to hold two buttons to go into Edit Mode, use Pads 11 or 12 to shift up and down, then press another pad to confirm. This one feature significantly hampers playability, and for me stood in the way of iRig being something you could use with your laptop as your sole controller in a mobile composing rig. 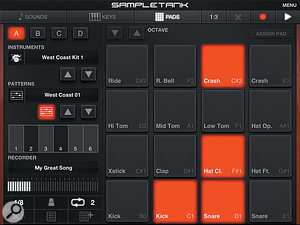 IK’s SampleTank instrument under iRig Pads control.As with the laptop, the iRig Pads were simple to hook up to my iPhone 5S and worked straight away with CoreMIDI-compliant apps. I tried with GarageBand and Xenon Groove Synthesizer. IK Multimedia have a few apps of their own, so I installed SampleTank Free and GrooveMaker Free. While the SampleTank instruments for Mac and Windows (of which the SE version is included with iRig Pads) are fairly traditional sampler plug-ins, the iOS versions are more like mini grooveboxes or workstations, with built-in multi-part sequencing. The iRig Pads become an intelligently integrated controller for the apps, with much more functionality than a generic MIDI controller.

Perhaps the most surprising thing about iRig Pads is how programmable it is. While I’d imagined the product to be mainly designed for simple out-of-the-box fun with an iPad, the level of customisable MIDI functionality shows IK’s pro roots, and make iRig Pads a powerful live performance controller and a generally versatile studio tool. Sixteen recallable Scenes store complete setups of the pads and other controls and all scenes are completely programmable directly on the unit. Scenes 1 and 2 are pre-loaded with General MIDI Drum and Chromatic Note sets and another four of the 16 scenes mimic Akai MPC banks and work with the iMPC Pro app. As well as regular Note/Velocity mode (on individually set MIDI channels), the pads can toggle notes on and off, transmit MIDI CC commands, either momentarily or toggled, and with fixed values or velocity-based values. You can also switch mode to send a Program change from the pads in any scene. Furthermore, the push-buttons can trigger notes as well as CCs and the Rotary encoder can work in relative mode with user-adjustable sensitivity. Finally, the LED status and colour of each pad can be controlled from external MIDI messages. By giving the iRig Pads all this functionality IK are providing a framework to enable detailed profiles to be created for any DAW or app, and making it much more useful than a generic controller. 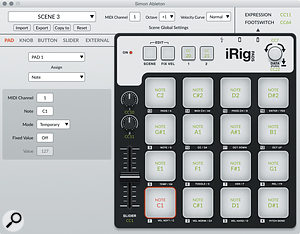 The dedicated iRig Pads editor software.Just as I was finishing up my time with the iRig Pads, IK released a software editor app for Mac and Windows, making it very easy to edit all control assignments in your 16 scenes. The app allows you to back up, load and store full configurations in seconds, and copy between scenes. An option to set the default octave for each scene was helpful, mitigating my complaint about octave shifting somewhat, as Scene changing is relatively fast and simple.

There are quite a few alternatives to the iRig Pads, many of which are significantly cheaper. However, with the iRig you get a highly programmable full-size pad grid in the traditional 4x4 layout, with little compromise in feel and sensitivity, which could easily do double duty in both the studio and in your laptop bag.

In the mobile pad controller market there are inexpensive offerings from Akai and Korg. You might also look at Akai’s MPC Element and Fly, if you’re looking for a mobile beat station. Arturia’s Beatstep also costs less than the iRig, and doubles as a stand-alone sequencer. If you like the iRig’s full-size pads, the most comparable competitor might be Akai’s MPD18, but that’s stretching the definition of portable a bit.

Rugged, iOS-friendly MIDI pads that are equally at home with your laptop or home studio.