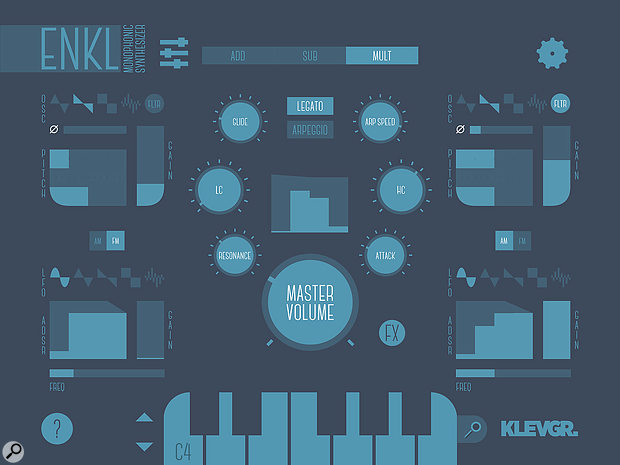 Klevgränd’s Enkl is a monophonic synthesizer for iOS, also available as a VST/AU plug-in. Named after an approximation of the Swedish word for ‘easy’ or ‘simple’, Enkl’s one-screen approach is visually simplistic in its subdued greys and blues, but it still manages to host many of the features expected of a monophonic synth.

The two oscillators are primed with triangle, square, sawtooth and noise waveforms with a series of horizontal sliders for pitch control (octave, semitone and fine-tune), plus a smaller one for start phase. In character the oscillators have a gnarly, biting quality, but they lack refinements such as PWM or oscillator sync. Unusually, there’s an LFO per oscillator which can be aimed at either the pitch or amplitude. The LFOs have a range from 0.1 to 20 Hz and, pushing beyond unusual into the positively rare category, each is shaped by its own ADSR envelope. With this neat convenience you can effortlessly achieve delayed vibrato, tremolo that disappears when the note is released and other advanced modulation shenanigans.

The LFOs have a range from 0.1 to 20 Hz and, pushing beyond unusual into the positively rare category, each is shaped by its own ADSR envelope.

If you enjoy the sound of broken ’80s computer games, multiplication is the ideal place to start. Whichever way you combine the oscillators, the output is eventually processed by a single amplitude envelope. Unfortunately this commits the cardinal sin (for monophonic synths), in that it always starts its journey from zero rather than from the envelope’s current level. Patches with fast attacks aren’t compromised, but Enkl’s slow attacks suck. There’s also a ‘chiptune-style’ arpeggiator, with a dedicated speed control (but no hold option).

After the luxury of an LFO/envelope pair for each oscillator, it’s a pity there weren’t any left over for the filter. The lack of envelope is especially limiting because the low- and high-pass filters together produce a good range of cutting, usable tones that can stretch to formant-like characteristics if you manipulate the resonance and two cutoffs manually. To help in this, external MIDI control is provided via a series of fixed CCs, but hopefully a future version might include a MIDI Learn function, allowing you to pick your own.

I mentioned there isn’t a filter envelope, but there is a single attack control that sets the time taken to reach the high-pass cutoff. However, the effect of this was far from spectacular. The final port of call in the signal’s journey to the outside world is a stereo delay and three-band EQ. If you adjust delay time during playback it goes briefly silent, but other than that it’s a fine addition.

In use, many of the controls are quite small and fiddly, which is odd given the amount of unused screen space. Even though there’s room for more keys, you’re offered a single-octave keyboard that’s sure to have you reaching for a MIDI controller. If you don’t have one, or prefer to work entirely in the box, a second keyboard is available at the push of a button. However, this ‘Extended Keyboard’ grabs half of the screen and removes access to the controls. Not ideal, but at least it gives you a realistic chance of hitting the right notes and offers basic scale correction too, with four scales available. Better still, you can gain extra performance control by dragging your fingers vertically or horizontally after playing a note. This proves to be superb for opening the filter, adding modulation or performing Clangers-style pitch-bending.

Enkl ships with 93 lead, bass, percussive, ‘FX’ and lo-fi presets, sorted into friendly categories. Though a creditable enough first synth, it’s priced slightly beyond an impulse buy and difficult to imagine as an app you’d return to a lot. Still, its monophonic simplicity could appeal to beginners, the synth-phobic or anyone who needs a fresh batch of fun sounds.