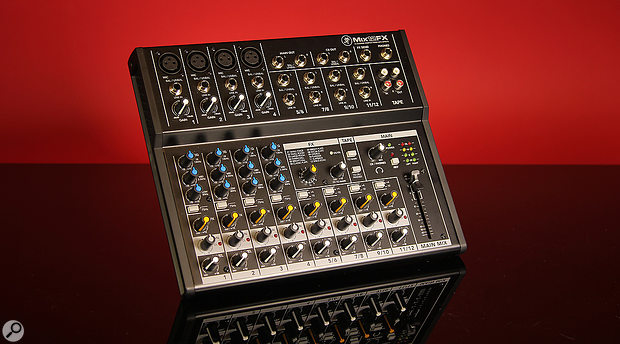 Mackie’s mixers have earned a reputation for offering excellent value for money. We check out their most affordable range to date.

Mackie have been dominant in the compact and cost-effective mixer market for 25 years now, and while the company’s small-budget mixers may not offer the very last word in technical excellence, they are always well-designed, with a good feature set, and very usable. Mackie say that their brand-new Mix series, launched at the end of 2014, is the most affordable mixer range the company have ever produced, and the Mix 12FX reviewed here is the largest in this new family. Its smaller siblings are the Mix 5 and Mix 8, with the Mix 5 featuring a single mic/line input plus two stereo line inputs (ie. five inputs in total), while the Mix 8 expands on that to offer two mic/line, two stereo line, and a stereo tape input. However, the Mix 12FX ups the ante considerably, with four mono mic/line and four stereo line inputs, a stereo tape input, and an internal digital effects engine.

The Mix 12FX has a very low profile, measuring 297 x 244 x 53 mm (WHD) and weighing in at just 1.7kg, the weight being largely due to its all-metal chassis. The only rear panel connector is a mini-DIN which accepts a dual 9V AC supply from a ‘line-lump’ transformer unit. Everything else is connected on the mixer top panel, where you can see it, with XLRs for the four microphone inputs, and TRS sockets for almost everything else. All of the line inputs can be used with balanced or unbalanced sources, of course, and similarly all of the outputs (apart from the stereo headphone socket and tape outputs) are wired as ‘impedance-balanced’ sources, which means they can be used to feed either balanced or unbalanced destinations without level changes. Phantom power is available for all four mic inputs via a global switch near the console meters.

Although only supplied with a very simple Quick Start Guide for the whole Mix series, rather than a model-specific full manual, I think the guide provides more than enough information to get most users up and running. However, a full manual is available as a download, with extra operational details, descriptions of the effects programs, block diagrams and a more complete set of specifications.

Working through the Mix 12FX’s signal path, there isn’t much to confuse anyone. The four mono mic/line inputs each have a rotary gain control providing 0 to 51 dB for mic inputs or -15 to +32 dB for line inputs. The maximum mic input level is +19dBu, which is plenty, and +21dBu on the line inputs (which are padded down and routed through the mic preamp for the mono mic/line channels, as is normal for mixers of this kind). Perversely, the unity mark for the line-input mode actually provided +9dB of gain (with the channel and main faders at their unity marks).

There are no channel insert facilities, so the next item in the signal path is a push button below the EQ section which introduces a very useful third-order (18dB/oct) high-pass filter with a 75Hz turnover frequency. A three-band EQ is provided on all four mic/line channels, comprising high (12kHz) and low (80Hz) shelf equalisers, plus a fixed-frequency (2.5kHz) bell section, all with ±15dB ranges. There is no EQ bypass button, but all three gain knobs have centre detents.

Routing to the outputs is taken care of via the last three knobs in each channel strip. The first is a post-fader effect send, which feeds both the internal effects engine and a mono physical output — a very useful feature enabling the use of an external effects processor. The effect send control has a unity-gain position marked at the centre detent, and 14dB of extra gain available when fully clockwise. There is no effects master level control, so whatever level is sent to the effects bus is what appears at the effects send output. A pan knob is also provided, with a centre detent, and an adjacent overload LED illuminates when the channel signal is within 3dB of clipping. The channel ‘fader’ is another rotary control, and although the centre position is marked for unity gain there is no centre detent. The Mix 12FX is not equipped with channel mute or PFL buttons. 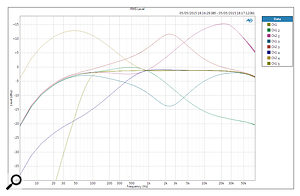 Here you can see the effects of all the EQ gain knobs at their maximum and minimum settings, as well as the response of the 75Hz high-pass filter.The four stereo line input channels are much simpler, with no EQ or gain controls, but they do have push buttons to change the nominal input level between +4dBu and -10dBV (which is roughly -8dBu). With the channel and main faders at their unity-gain marks, and the sensitivity switch in the +4dBu position, the output level is the same as the input level, and switching to the -10dBV mode introduces the correct 11.8dB of additional gain. The stereo channels’ two input sockets are cross-linked such that plugging into the left socket only routes the signal to both left and right outputs. In place of the mono channels’ pan controls, the stereo line channels have balance knobs, and a stereo rotary fader is provided. A mono sum is used for the post-fader effects sends.

On the output side, the stereo mix bus passes through the main mix fader — a real short-throw (60mm) fader, this time — and on to the main output TRS sockets, the RCA/phono tape output sockets, the meters, and the monitor section. The meter bargraphs comprise just four LEDs which illuminate at output levels of -20, 0, +6 and overload — the first two being green, with orange for +6dBu and red for overload (at +18dBu). The mixer outputs clip at +21dBu, so the red overload lights warn when there is less than 3dB headroom left. I was surprised to find that the tape outputs provided the same output level as the main outputs, rather than a lower level for better compatibility with -10dBV standards. In practice this won’t be a problem provided care is taken setting the external unit’s input level.

The monitor section receives the main mix by default, but a push-button switches to the tape input RCA/phono sockets, if required. A rotary control adjusts the monitor level feeding both the physical TRS output sockets (labelled CR Out), and the stereo headphone socket. A second push button in this section routes the tape inputs to the Main Mix, but there is no level control.

Setting the Mix 12FX apart from its siblings is, of course, the internal digital effects engine, which automatically receives any channel signals routed to the mono effect send bus. A 12-way rotary switch selects the effect type and a rotary control adjusts the (wet) output level feeding into the main mix. A red/green LED indicates signal presence and overload. The 12 effects options start with eight different reverbs (small stage, small room, large room, warm hall, bright hall, classic plate, bright plate and vocal plate), but there are also chorus, flanger, slap-back and ‘space echo’ effects. These are all preset effects with no facilities to change any parameters at all, but they are all generally quite usable and well chosen — and if you really want something very specific you can always turn down the internal engine level and hook up an external effects unit instead.

The first three reverbs mostly add ambience and early reflections, rather than overt reverberation, while the two halls are more obviously reverberant, and the vocal plate has a rather longer decay time than the classic and bright plates. The space echo mode has a longer delay time than the slap-back echo, and includes regenerative feedback.

Bench tests broadly confirmed the published specifications. I measured the microphone amplifiers’ EIN figure at -121dB, which is about 10dB noisier than the theoretical limit, but perfectly adequate for the kind of applications for which this compact mixer is intended. The THD+N figure was fractionally higher than published, but not enough to worry about. Phantom power measured on the low side, just within specification at 44.6V, but with plenty of current available and no sign of sagging when all four channels were powering mics.

The Mix 12FX is well built with a robust and solid feel to everything, so it should prove reliable. However, I noticed that the internal DC-DC power converter (located in the top right-hand corner of the unit) generates quite a lot of heat. You can feel ‘warmth’ around the headphone socket, but the bottom panel gets positively hot — enough to make me almost drop the unit when I reached underneath to pick it up! Although there are ventilation slots underneath and holes in the side panels, they all appear to be covered over.

Mackie’s new Mix 12FX might not be the most comprehensively equipped or specified mixer, but the facilities that are provided are very well thought out, appropriate for the intended applications, and it sounds good. Given the feature set, the robust construction, the compact footprint, and the extraordinarily low asking price, the Mix 12FX is a very attractive problem-solving product ideally suited to small PA jobs and band rehearsals, or desktop mixing for home studio setups.

There are countless compact budget mixers on the market, but the Mackie brand has always represented reliable quality and design elegance, and the new Mix Series are the most affordable compact mixers ever offered by the company.