While an overdrive pedal might not seem like an obvious studio accessory (other than for conventional guitar recording using an amplifier), I’ve often found that using an analogue overdrive pedal before a software modelling amp/speaker produces more musical results than relying on digitally modelled overdrive. Overdrive is actually quite difficult to model accurately, as new frequencies are generated that can fall outside the Nyquist limit for the converters and that can, in turn, cause unpleasant aliasing. The better designs get around this by increasing the sample rate within the plug-in, but at the end of the day they’re still chasing the analogue sound — so why not just use the real thing?

Italian in origin, the Nemphasis X7 Tube Overdrive is an analogue pedal that uses a valve as the distortion-generating element, and in this case it’s an EEC83/12AX7 dual-triode valve. The pedal’s folded metal case is fitted with simple gain, tone and level knobs, and the footswitch operates a clunk-free hard-bypass mode. A red LED shows when the pedal is active and connection is via jacks on the sides of the case. Power comes from an external, Boss-compatible 9V adaptor (350mA maximum current draw) but this isn’t supplied with the pedal as standard. Presumably, the company would like you to consider one of their own pedalboard power supplies, which are amongst the most comprehensive I’ve seen; the top model in the range offers various output voltage, isolation between outputs and even adjustable ‘battery sag’. 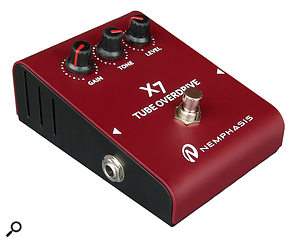 In use, the tone control goes from dark to quite bright, so it doesn’t sound like just a simple top-cut affair. Drive takes us from a bluesy edge all the way to classic rock and beyond, but what I like about this pedal is that the valve biasing has been finely judged so that the characteristic asymmetry of triode distortion isn’t overplayed to the point that offensive low-frequency intermodulation distortion becomes evident. In this respect, I found that the overdrive had something of a Marshall DSL quality to it.

There’s enough output level on offer to overdrive the front end of an amplifier if desired, but it’s important to appreciate that, when using it with a DAW, overdriving the input stage of the audio interface is unlikely to produce particularly musical results. In that scenario, you should set the level to leave enough headroom to keep you well away from clipping. Other than that, you can plug the pedal into a line or instrument input, though note that if you bypass the pedal the clean sound will only be correct if you go into an instrument input, as this will have the necessary high impedance.

Best of all is that, despite its strong performance, the X7 costs no more than many non-esoteric analogue pedals. It works brilliantly for giving a clean amp what amounts to a separate overdrive channel, and studio hermits will be pleased that it plays nicely with DAWs. Paul White

USA price TBA (about $120, based on exchange rates when going to press).