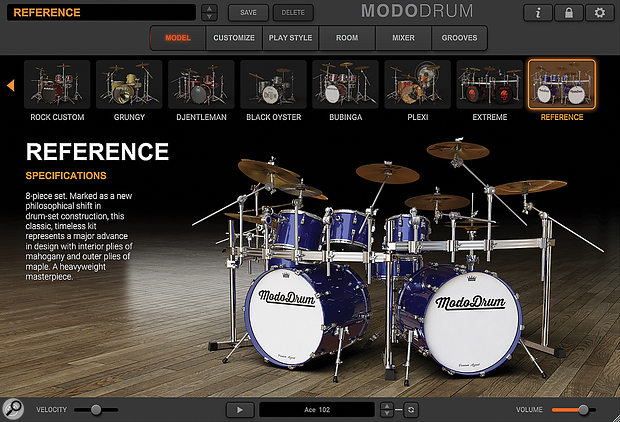 MODO Drum opens on the Model selection screen. Ten kits are available, each loading with a predetermined configuration and a 'serving suggestion' mix already set up as a starting point.

IK Multimedia follow up their highly acclaimed MODO Bass with a percussive counterpart.

As an alternative to sampled instruments, physical modelling is increasingly proving itself to be a viable method of generating the sounds and performance nuances of real-world instruments, often with astonishing authenticity. Modartt's Pianoteq VST offers a growing collection of modelled pianos, harpsichords, electro-mechanical keyboards, harps, pipe organ and idiophones; Audio Modeling's SWAM system gives us solo strings, woodwinds and saxes, whilst Sample Modeling boast a collection of astonishingly realistic modelled brass instruments, and solo and ensemble strings. We have Hammond clones popping up everywhere, and of course there's IK Multimedia's own superlative MODO Bass. Almost everything, it seems, is up for the modelling treatment — with one notable exception. Apart from hardware units such as Roland's V-Drums (introduced in 1997) and Korg's Wavedrum (1994), modelled acoustic drums have been thin on the ground up until now. MODO Drum fills that void, bringing with it the ability to customise kit pieces in fine detail, even to the specifics of how they are played.

IK are keeping technical details of MODO Drum's modelling method close to their chest, referring to it simply as 'modal synthesis'. The size of the installation — 6GB — may offer a clue, being larger than expected for a modelled instrument. This suggests there is sample data involved, as opposed to purely mathematically based synthesis. Perhaps — and this is purely speculation — it's based on a system of partials that are continually recombined on the fly in response to the player's input. However, attempting to deconstruct the 'how' is akin to having a magic trick spoiled by knowing how it's done — what matters is if it works and sounds good.

MODO Drum currently offers 10 drumkits: Studio, Jazzy, Rock Custom, Djentleman, Black Oyster, Bubinga, Plexi, Grungy, Extreme and Reference. As I'm not intimately familiar with drum fittings and fixtures, I couldn't reliably say whether the graphics for each kit represent specific real-life models or marques. Nevertheless, IK have managed to create a selection of kits with distinctly different characteristics. They sound no less like real drums than you'd expect from a top-quality sample library; there's no suggestion of what I would think of as sounding 'synthesized'. As IK have done with MODO Bass, I suspect more kits will be added in future updates, but that is unconfirmed.

On firing up MODO Drum, it opens on the Model page (shown above) with the default Studio kit loaded. The GUI, incidentally, is freely resizeable, making it adaptable to different monitor sizes. Clicking on any of the kits in the top row loads the default set for each one. These vary from a simple Kick, snare, hi-hat, two toms and two cymbals layout (eg. Black Oyster) to full-on setups with two kicks, five toms and 10 cymbals (eg. Extreme and Reference). MODO Drum's MIDI note assignments follow (by and large) the General MIDI convention — the PDF manual provides a reference key map of all the articulations' locations, although having this map available from within the GUI would have been more expedient. Claps, tambourine and cowbell are also included for every kit; these are samples, and there appears to be only one type of each. Nevertheless, they all have round robins, and as they each have dedicated channels on the Mixer (discussed later) they can be processed individually to provide some variation to their sounds. Currently, there is no facility to remap drums to your preferred MIDI note numbering, which means that importing a drum part designed for a different drum program may not necessarily be a straightforward task. This could also be problematic for e-drummers whose kits' trigger units don't allow for re-mapping, or don't include the means to access all the features MODO Drum has to offer. Custom note mapping has been a popular request amongst MODO Drum users, so hopefully IK will address that in the future. 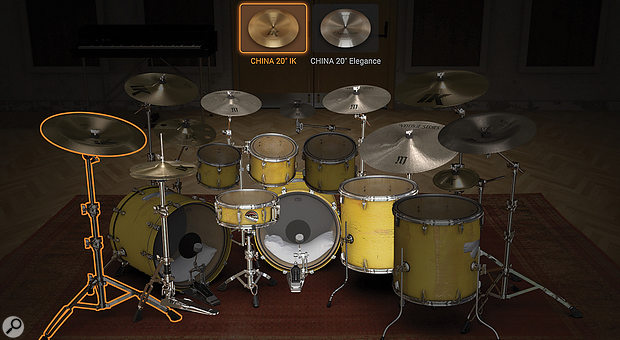 The Edit Kit page is where the size of a kit is configured. All possible pieces are shown. Inactive ones are greyed out — click to add them to the kit, then choose from the selections offered at the top.

Individual kit pieces can be mixed and matched to create custom kits — this is done on the Customize page. In the case of the kick, snare and toms, just click on the kit piece you wish to change and choose from the 10 varieties shown at the top of the screen. Hi-hats offer three variations, whilst cymbals offer between two to three choices depending on the type of cymbal. Kit size is also customisable on the Edit Kit page; all possible pieces are shown here, with inactive pieces appearing greyed out — just click on the ones you wish to add and they light up ready for use.

Now we come to MODO Drum's unique selling point: the physical modelling. Each drum (kick, snare and toms) is 'deconstructed' to its principal component parts, an approach not dissimilar to Roland's V‑Drums. From the Customize tab, clicking Edit Element displays the parameters for the currently selected drum. The snare provides the most detailed editing: the batter head offers a choice of clear or coated skin, with volume, tuning and damping amount. The shell's diameter and depth are adjustable, with options for sharp, pointed or rounded bearing edge. The resonant head's volume is adjustable, whilst the snares (the rattly metallic bits) provide a choice of medium or large, with variable tension. The Tom Buzz knob adds sympathetic resonance overspill from the toms — a nice touch if used very sparingly — whilst the Room and Overhead knobs control the amount of those ambiences respectively. The toms provide a similar set of controls, though obviously without the snare wire parameters or the Tom Buzz amount. Their resonant heads can also be tuned, damped and adjusted in volume. To avoid tedious page-jumping, the toms also have a useful Group Editing function which, when engaged, copies changes made to any tom to all the others — a time-saving feature when dealing with matched sets. The kick's parameters are similar to the toms, with an additional Snare Buzz amount adding sympathetic snare rattle.

Hi-hats and cymbals are treated differently; as far as can be gathered from the information available, these are all sampled. IK describe them as being handled by a 'cutting-edge cymbal sample engine', although details of this engine are not given. With the exception of the hi-hat and ride, adjustments for the cymbals are damping, tuning, room amount and volume; the crash, EFX and splash cymbals can also be choked. The ambient quality of the cymbals suggests their volume controls adjust overhead mic levels — they have no separate close mics. The hi-hat and ride, on the other hand, have close mics whose levels are adjustable via their faders on the Mixer, in addition to overhead and room sends. Hi-hats are well detailed, with various articulations covering tip, shank and foot variations of closed and open hits. Especially welcome is the option to continuously vary both tip and shank hits from fully closed to fully open using a MIDI CC (user definable). E-drums equipped with a suitable hi-hat pedal can take advantage of this, as indeed can any MIDI device with continuous controllers. 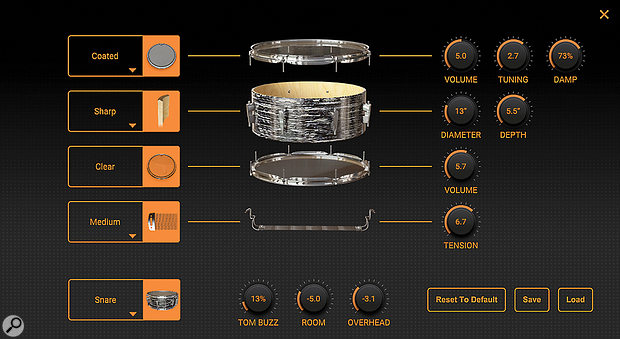 The Edit Element page reveals all adjustable parameters for the drums' component parts. Sympathetic resonance spill from the toms can be added — the room and overhead levels are duplicates of those found on the mixer channels.

Sample-based drums typically deal with the issue of sounding mechanical or 'static' using a combination of velocity layers and round robins to provide an illusion of tonal variation — essential for realistic–sounding rolls, and for generally sounding less predictably repetitive. MODO Drum features an 'infinite round-robin' system to take care of this, with special attention paid to the snare and toms. On the Play Style tab, selecting the snare or any of the toms presents a graphic of the batter head with two circles — one for left hand, one for right (right-hand hits are always located two octaves above their associated left-hand hits). The playing position for each hand is adjusted by dragging the circles to where you want them — the closer to the rim, the brighter and shallower the sound becomes. As with the hi-hat, the snare and toms' playing positions can also be controlled by MIDI CCs. The L Area and R Area knobs adjust the diameter of the circles — the smaller the circle, the more focused and consistent the sound. Enlarging the circle increases the amount of random positional variations between hits. 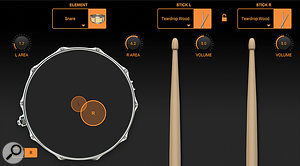 The Play Style page offers identical features for the snare and toms. Playing position, diameter and stick tips can be set for left and right hands individually. Playing position can also be controlled by MIDI CCs or from compatible e-drum pads.Being an investigative sort, I had to test this for myself, programming a long run of 32nd notes all at one velocity to check for any audible signs of cycling or predictable pattern. There was none, even with the circles at their smallest size. MODO Drum's infinite round-robin system clearly works well. I'm less certain of IK's claim of infinite velocities — the same test with a linear ramp of note velocities from 1 to 127 did reveal stepped tonal changes occurring at specific velocities. However, keyboards can only generate 127 distinct levels, so perhaps the stepping is a result of subtle changes in tone being skipped due to being sub-divided into 127 steps. Even if e-drum pads are capable of generating the in-between velocities, those subtleties would be lost the moment you record the part into a sequencer.

Moving to the right of the Play Style screen, we have a choice of three types of stick tip: teardrop wood, teardrop nylon or none (ie. the 'broomstick' end). These make a distinct difference to the transient edge of the sound, with nylon having the sharpest attack. The amount of tip impact can be finely adjusted — you can even have different tips for left and right hands. Engaging the lock icon ensures a matched pair with identical impact levels. The kick drum obviously has no positional adjustment, since it always strikes in the same place. Instead, there is a choice of heel-up or heel-down pedaling. Heel-up is the most common technique for rock drumming, being more 'muscular' and allowing for easily performed double-strikes. Heel-down produces a softer sound, being easier to bounce the beater off the skin and more suited to jazz styles. Three types of beater are available — felt, wood and plastic; the difference between these in attack and tone is quite marked. Think felt for jazz or ballads, wood for rock/pop and plastic for prog metal and you get the idea.