MODO Drum's mixer is well equipped to create a fully produced-sounding drum mix straight from its master output. Not only does it have up to 22 drum channel strips — one for every component of the kit — but also channels for overhead and room returns, and two effects returns. The GUI can only display 10 drum channels at once; it took me a moment to realise that you need to use the mouse's scroll wheel to reveal the hidden channels — a small detail missing from the manual. Grouping channels together into busses is essential for global treatments, a typical example being to apply the same processing to all the toms at once. MODO Drum's mixer allows you to create busses as you need them — the manual says 'infinite busses' but in fact the maximum possible is eight. Every drum and bus channel has volume, pan, mute, solo, overhead and room sends, two effects sends, four effects slots, an eight-band parametric equaliser and a phase inversion switch; the overhead, room and effects returns omit the sends for obvious reasons. 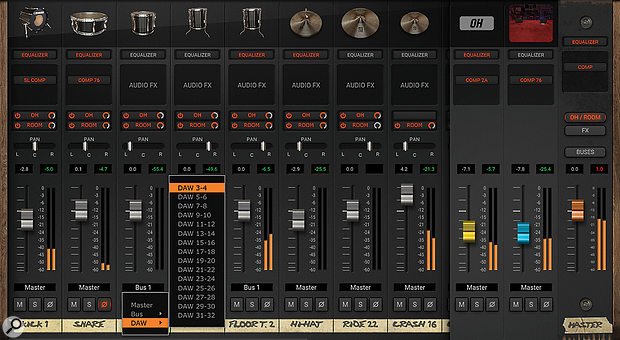 The mixer showing eight drum channel strips — two more are hidden beneath the overhead and room channels which are flown out on the right. Further drum channels are revealed by scrolling the mouse wheel. Channels can be routed to up to eight busses, or any of the DAW inputs shown.

A bug arose concerning the bus channels' effects sends — they don't work; IK are aware of this and hopefully will fix the problem in due course. The effects themselves comprise a suite of 19 processors derived from IK's T-RackS and Amplitude plug-ins. Detailed descriptions would occupy more space than available; nevertheless they include emulations of well-known compression and distortion units, plus reverb, delay and modulation effects.

In sample-based drum programs, both the room and overheads are recorded in real spaces. MODO Drum differs in that its 'room' is a convolution reverb simulation, offering nine flavours of ambience, selected from the Room tab. The advantage of this approach is that you're not stuck with the room the drums were sampled in, although some might argue that one real room is a 'truer' sound, and preferable to a simulation. If none of the provided impulses suit your needs (and since they cannot be edited), there's always the option to send to one of the editable effects reverb algorithms instead, or to route channels' outputs to your DAW and use your preferred plug-ins. I would like to have seen an option to use one's own convolution impulses — perhaps an update for IK to consider. The overheads, on the other hand, appear to be derived from actual recorded material.

It's fairly standard practice to include a collection of pre-programmed MIDI grooves in drum programs, and MODO Drum is no exception. Selecting from its 1400+ grooves is done using the well-established method of filtering by genre, category, length and time signature. Tempo can be halved or doubled from the original, and overall dynamics adjusted by the Velocity slider. The result can be dragged directly into your DAW, enabling quick construction of intros, verses, choruses, outros and fills. The facilities on offer are fairly basic compared to groove engines found in other drum programs; you can't apply transformations to individual drums or create a library of your own grooves, for example. Nevertheless, some may find the supplied grooves useful for quickly mapping out a song prior to programming a 'proper' drum part.

MODO Drum does what it does very well — the modelling enhancements are certainly a significant step forward, and it has a distinct sonic fingerprint of its own.

Whilst MODO Drum's collection of presets demonstrates the wide-ranging sonic potential, many tend to rely heavily on effects processing, often with the overheads dominating the proceedings — which is fine if they work in your tracks. Since the subtleties of modelling parameter adjustments and the individual character of the various drums comes across most clearly on the close mics, I found myself drawn more to those in the pursuit of a natural sound. Too much of the overheads, and the subtler nuances can get lost.

Once some judicious processing was applied and a decent mix began to take shape, I'd occasionally find myself needing extra gain on the close mics, particularly on the snare and hi-hat. Turning up a drum's volume on the Edit Element page may do the trick, however you may not want to disturb the volume balance of the batter and resonant heads. As there are no channel–strip gain controls, one way to boost the level is to insert a compressor in the channel strip and raise its output level or make-up gain. Another solution is to route channel strips to your DAW; not only do you have full control over gain, but access to your entire arsenal of plug-ins.

Whilst MODO Drum's effects are more than capable, having the additional luxury of the compressors, EQs, reverbs and other toys that you know and love (especially transient shaping — I cannot recommend XLN Audio's DS10 Drum Shaper highly enough for that task) is gold dust. There's one particularly annoyance concerning the mixer: having assigned your channel strips to various busses and DAW outputs, selecting a new kit from the Model tab resets all those assignments (and the room/overhead send levels) back to their pre-programmed settings. What's needed is a lock on the mixer to retain all its settings regardless of which kit, preset or kit piece is selected. Another useful addition would be totally neutral, dry presets for all the kit models using only the close mics for those who want to program entirely from scratch.

So is MODO Drum a one-stop solution to drum programming and sound design? Every drum program offers something the others don't, both sound-wise and feature-wise, in the same way that an orchestral library might suit one track but not another, and so it is here. MODO Drum does what it does very well — the modelling enhancements are certainly a significant step forward, and it has a distinct sonic fingerprint of its own, making it a valuable complement to other drum libraries.

The room/overhead effects send issue is the only bug I've found, which is pretty good going for any software's initial release. As is often the case with software, once you discover its potential a wish list inevitably comes to mind: brushes and mallets for the snares and toms, tom rimshots, and additional articulations such as bell, tip and mallets for the cymbals, or even edge-to-bell positional variations for the ride and crash cymbals. And for the mixer, the choice of pre or post sends for the FX, room and overheads. No doubt some of these could never happen, requiring major structural changes to the program, but we can always dream. If you don't ask, you don't get! I look forward to future developments.

Downloading and activation are fairly straightforward via IK's Authorisation Manager. Interestingly, during installation there is no option to install the 6GB of data to a drive of your choice; it installs to your main C drive. The MODO Drum program does not offer any means of migrating that content elsewhere, so if you want to make an external backup it's probably advisable to do it with the original files you've downloaded.