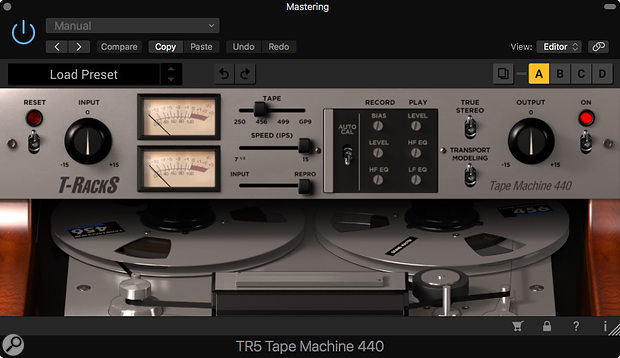 There's a certain romantic attachment to tape, rooted in both its physicality and its sound. The attraction of a tape machine today lies in its imperfections — as with vinyl (also far from perfect), we've come to appreciate the sound character of those imperfections. Most tape machines, for example, have a far less than ideal phase response (square wave in, mangled blob out). Also, the tape itself is non-linear, introducing distortion that gets more severe at higher signal levels. And wear in the mechanical parts gives rise to frequency modulation effects known as wow (slow modulation) and flutter (higher frequency modulation). The machines' designers would be shocked, but for some reason most of us just love the way all that sounds!

IK Multimedia have tried to satisfy both the visual and auditory senses with detailed modelling of the sound of four classic tape machines, each complemented by photo-realistic graphics with rotating reels. The applications for these plug-ins encompass both individual track processing and overall mix processing. All four emulations have similar controls and suitable level metering so operation is straightforward. The user can tweak drive, bias and record/play EQ controls to fine-tune the sonic character where the presets don't do the trick — turn the bias down a little to warm up the sound, turn it up a touch higher to add presence, or overdrive the input for more saturation.

All four plug-in emulations offer control over tape speed, head selection, record bias, drive and EQ as well as a true stereo feature that aims to reproduce the small but important differences between channels.

Tape Machine 440 (shown above) is based on the US-built Ampex 440B machine that dates back to the late 1960s. (The brochure for the original machines suggests that stereo recording was possible on quarter-inch tape but some of these machines could also take half-inch tape and be used for four-track recording.) It lends a subtle but distinctive coloration to the sound. 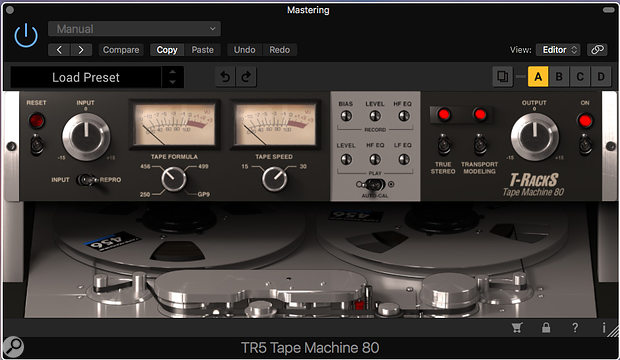 More familiar to many will be Tape Machine 80, an emulation of the popular Studer 24-track, two-inch A80 MkII. This Swiss machine, available from 1970 to 1988, was a popular workhorse for multitrack recording, and many classic albums were made on them. Subtlety is the key here, with just a dash of harmonic enhancement and that all-important magic glue. 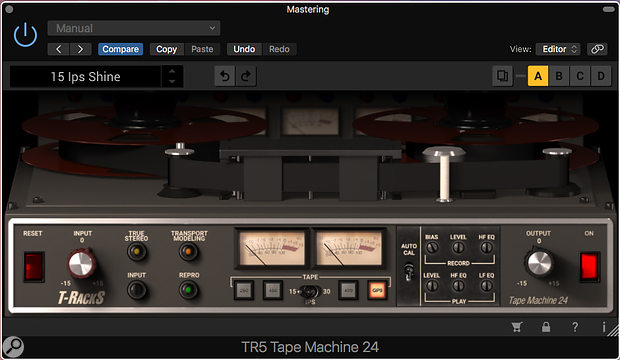 Tape Machine 24 models the MCI JH24, first produced in 1980 and a popular machine in US studios. It was distinguished by transformerless circuitry based around high performance op-amps, with a view to delivering the cleanest sound possible from tape. In the plug-in, you can try the different tape types and then push them to see what different types of warmth can be added, as running at lower levels produces extremely subtle results. 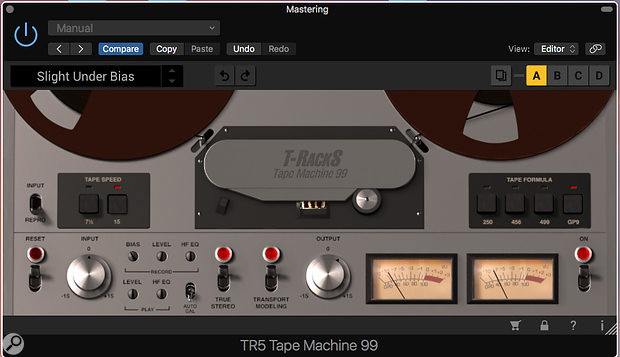 Tape Machine 99 channels the Revox PR99 MkII, a high-end stereo Studer model dating back to the 1980s, which combines both discrete and op-amp circuitry. It was designed to have a very smooth frequency response, with less of a bass end 'head bump' than typical machines.

Of course, every tape machine's sound would vary according to what type of tape was used with it, and in all four cases the user can choose from 250 (modelled after the 3M/Scotch 250 tape), 456 (Ampex 456 tape — but without the sticky shed problem!), Quantegy GP9 and Ampex 499. The tape speeds of the original machines are also offered.

All four plug-in emulations offer control over tape speed, head selection, record bias, drive and EQ as well as a true stereo feature that aims to reproduce the small but important differences between the left and right channels of a real analogue machine. Of course, our old friends wow and flutter are well represented here when the Transport Modelling switch is turned on. The flip side is that such detailed emulations eat up a fair amount of CPU overhead; any one of these tape machines takes a fair chunk out of one of my Mac's processing threads.

I tried all four machines on stereo mixes, and they all sound subtly different, as you'd expect. But they all definitely do 'that tape thing' of helping glue the sounds together — rather like a good-quality compressor does, adding fullness without dullness. The difference in sound is quite small at normal VU meter levels, but that's normal, since tape machines were always designed to sound as neutral as possible. It's when you start to push the input levels that they really start to show their colours. If the input stage is overdriven into the red, but not pinning the meter against the end stops, things warm up in a quite gentle way, but when driven really hard things get suitably crunchy. The latter might not sound great on vocals (though perhaps it could work as a parallel distortion effect) and it's also not something you'd normally want to do to a complete mix, but treating individual channels in this way can be great — it could be just the thing for snare drum, distorted electric guitar or dirty, mid-rangey synth sounds. Using one of these machines driven more moderately to add polish to a final mix works really well; you can do this when mixing or leave it until mastering.

Ultimately these emulations aren't a new idea: they're up against conceptually similar offerings from Waves, Slate, Universal Audio and various others. But as with other IK Multimedia products, these are good plug-ins that hold their own in that company, and are well worth investigating.