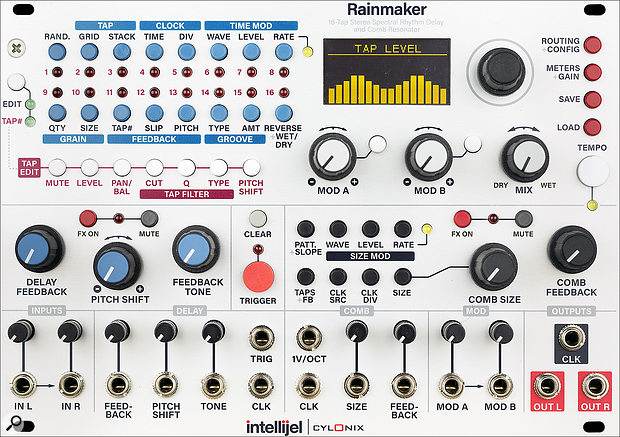 If, like me, you sometimes use cost or size considerations to avoid checking out new modules, it’s possible you never gave the Intellijel Rainmaker enough attention. Another collaboration between Intellijel and Cylonix, the Rainmaker is neither cheap nor small — and the early demo videos weren’t great either. However, with the passage of time and the inclusion of more adventurous presets, it’s becoming difficult to ignore the background ‘wows’ of enthusiasts.

The Rainmaker consists of a stereo 16-tap spectral delay paired with a 64-tap comb resonator, the latter sporting external triggering options that turn it into a (single-voice) Karplus-Strong synthesizer. The module can be configured to operate in serial or parallel modes, have either section feed the other, or you can separate them for two individual roles. It’s therefore a very flexible and high-quality (96kHz, 32-bit internal processing) module. I mentioned just now that fresh presets have been added and of particular interest are those created by Richard Devine. Located in slots 82-128, they show off some of the amazing textural possibilities you can enjoy straight out of the box.

As you can probably tell from the panel, there are copious programming options, so it’s good to know you can back up the patches via USB, a fact that isn’t immediately obvious because the USB port is accessed internally. With 128 memories to overwrite, I doubt this will be an issue right away, but when you do want to access the USB port, you’ll have to open up and either leave a cable trailing through your case or rest the module outside temporarily while you back up. Personally, I much prefer the route taken by Waldorf in their NW1 module, which has a convenient front-panel USB port.

There’s no denying this is a major gobbler of case real estate, but any misgivings I had about size were quickly dispelled as I started to explore. The Rainmaker is superbly laid-out — it’s a user interface without any obvious compromise. I’m not usually a fan of displays and menus in my Eurorack, but here the pin-sharp OLED is invaluable, whether for showing the tap levels and panning, the filter settings or the signal gain/routing. Seemingly minor panel additions make a huge difference, eg. the Clear button will quickly empty the buffer, restoring calm to what can sometimes be a highly complex ‘echo soup’. There are also CV inputs for all the main panel functions, including separate clock inputs for each section, and two user-programmable modulation controls (and CVs); these take care of parameters that aren’t directly accessible.

The per-tap options are pretty extensive and include level, pan, resonant filter values and pitch. You can choose the tap to be used for feedback independently for both channels. There are controls for global pitch shift, delay feedback and tone — all very handy to have. You can apply subtle (or not so subtle) feedback detune, again independently on each channel. Throwing caution to the wind, you can route the combined output of all taps into the feedback or vary feedback position according to the comb resonator size. This variable feedback can kick off spooky, random ringing effects if you modulate the comb size with a slow, free-running LFO or similar.

I was relieved that the ‘piles’ button referred to in the manual has been renamed ‘stack’ on the module itself since, at my age, some words can send shivers to regions best left undisturbed. Anyway, a stack is a means of applying the same time value to multiple taps. It’s a trick that can be magical for building layered filter textures or when combined with the granular pitch shifter. Each tap can have a specific pitch shift, leading naturally to simple (or complex) chords. The granular processor is based on up to four grains of varying size and overlap; it’s the source of many of the Rainmaker’s most ethereal patches.

Delay times can be synchronised to an external clock or set directly with the tap tempo button. The values for grid, stack and time divisions combine to define the overall timing and spacing of each tap. The delay taps have a range from 0.1ms to over 20 seconds and the times can be swished around with an LFO too, with all the expected pitch-warbly goodness. If all that isn’t enough, the default groove that spaces the taps evenly apart can be replaced by a selection of preset patterns, including swing, random, accelerando, etc.

Despite its apparent complexity, Rainmaker is surprisingly easy to get around. With so many taps to play with, perhaps the only hard bit is imposing restraint and avoiding the descent into total mush. Dedicated buttons mean you can easily select any tap to work on or edit all at once. What I did find lacking was an ability to apply changes only to a selection. There are, at least, a number of preset ramp shapes enabling you to perform tasks such as gradually closing the filters along the taps, or raising the pitch as you progress through.

One of the coolest creativity stimulators is the randomiser — it scrambles some (or all) of the values until something new (and probably unexpected) appears. Randomisation is one of the functions that can be assigned to the trigger button (and input) so, if you’re feeling adventurous, you could even sequence the randomisation process. It would be slicker if the choices for randomisation could be refined and limited, though, because some of the results can be mad, noisy or clicky — thank heavens for that Clear button! By the way, other tasty trigger options include freezing the current buffer, reversing or clearing the delays or providing a ‘ping’ to stimulate the comb resonator.

The comb resonator is not merely a source of chorus or flanging but offers a wealth of tuned resonator tonality. There are a couple of trigger impulses to choose from and the resonator types include guitar, sitar and clarinet, each imposing their own character. Additionally, a selection of 16 comb patterns produce a range of textures, with four slope shapes providing swells, crescendos and decays. Naturally it’s the shorter resonator delay times and high feedback that create the characteristic ringing tones, but with longer delays (over 20 seconds is possible here too), discrete echoes appear.

The Rainmaker is a massively powerful tool to tempt any sound designer and it has the potential to amaze for years to come. While it can perform regular delay duties, it really shines as a source of ambient, resonant reverbs, complex rhythmic patterns and ringing synthesis, all married with chorus, flanging, pitch shifting and assorted granular grumbles. Apply a spot of creative modulation and even the simplest signal input can unleash swarms of buzzing insects, grainy chords and filter sparkles, plus a gazillion options I’ve yet to stumble across. Surely a future classic.