Izotope's latest plug‑in provides a one‑stop shop for polished vocal sounds, with deeper editing available for those who need it. 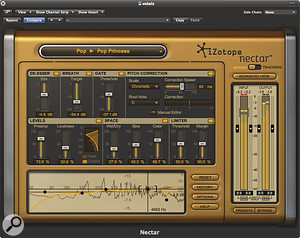 Creating a modern vocal sound can involve many different processes and requires quite a lot of skill to get right. Izotope have come up with an easy solution in the form of Nectar, a cross‑platform plug‑in that is available in RTAS, Audiosuite, VST, MAS, Audio Unit and Direct X formats.

Though Nectar opens as a single plug‑in window, it is actually a type of macro comprising 11 separate vocal production tools. The user can choose from a list of preset styles and treatments for instant gratification, whether working on folk or rap, pop or soul. As soon as you load a preset, the appropriate settings are made in the various sections, which include automatic pitch correction, breath adjustment, noise gate, compressor, saturation, EQ, de‑esser, doubler, limiter, reverb and delay, though not all the styles use all the sections.

The main page shows seven sections, each with a simplified control set providing between one and three faders, some of which adjust multiple parameters behind the scenes. An EQ curve display and spectrum analyser always occupy the lower portion of the screen. The function of the last couple of sections depends on the preset selected. Of course, presets rarely offer exactly what you're looking for, so, using just a handful of 'producer level' controls, you can turn the various sections on or off, and also adjust key parameters via sliders within the sections. These adjustments are important, because processes such as gating and compression depend very much on the input signal level and its dynamics, so some adjustment is often necessary to achieve the best results.

Izotope have tried to make the user interface appeal to musicians, not just engineers, so you'll come across terms such as Clarity, Warmth and Sparkle rather than the usual dB and Hz. However, those more au fait with setting up processors don't have to worry that their engineering skills are being undermined, because clicking on the Advanced button brings up a list of the individual sections, and allows you to open any of them in a dedicated window to access more in‑depth adjustment. At this level, each section offers similar controls to what you'd expect to find on a dedicated single plug‑in. In essence, then, you can access Nectar on three levels depending on your abilities and experience. At the simplest level, you trawl through the style presets (12 Genres encompassing 110 Styles) until you find one you like. The next level, and the one I suspect many users will choose, is to find a preset you like, then adjust it using the limited number of controls you'll find in the main plug‑in window. For the ultimate in tweakery, find a preset that gets you in the right ballpark, click Advanced, then fine‑tune until you get everything exactly as you want it. 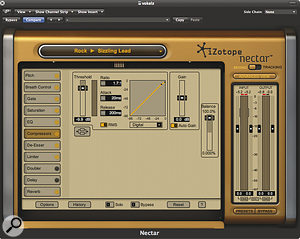 Each of Nectar's processing sections provides an advanced mode, giving access to more detailed control. Here you can see the advanced editing pages for the Compressor (above) and Reverb sections.

Looking more closely at the individual sections, Pitch Correction is based on the pitch‑shifting techniques Izotope are so well known for and uses an interface that will be familiar to anyone who has used Auto‑Tune, Logic's Pitch Correction or BIAS's Pitchcraft. There's a correction speed control that ranges from slow and natural to fast and robotic, and you can choose to have pitch quantised to specific musical keys or chromatically (chromatic is the default). At fast tracking speeds, you get the familiar pitch quantisation that is, inexplicably, still so popular, but set it beyond halfway and the vocal is nudged gently into tune without obvious side‑effects. There's also a graphical pitch‑correction mode reminiscent of a simplified take on Melodyne, where you can correct individual notes or transpose them to form new melodies by dragging them, again with full control over correction speed. Graphical pitch editing can only be used in DAWs that provide the correct transport control and location information, and is not available for the Direct X version of the plug‑in.

One feature not often found on standard vocal processors is the ability to separate out breath sounds and adjust their level separately, or set a target level for them. With Nectar, you can, and if you don't want to wander into the advanced settings page, you can simply choose a target loudness for breaths and Nectar does the rest. The process is largely independent of the actual vocal level, so you can still set the breath level for a vocal part that, for example, gets significantly louder in the chorus.

The de‑esser is also very easy to use, with just a single slider on the main page to reduce the level of sibilants. This can work well, although if you get too heavy‑handed the vocal can end up sounding slightly lispy: as ever with de‑essing, use no more than you need. More detailed adjustment can be made in advanced mode, where you can adjust the de‑ess frequency and there's graphical display of gain reduction against frequency.

Nectar's Compressor section is tailored specifically for vocals and uses models based on optical and solid‑state analogue hardware. On the main page, the Compressor often shares a section with the preamp saturation control, where the only adjustment is a Loudness fader. Flip to advanced mode, though, and there's a full set of controls including threshold, ratio, attack, release and gain. You can set up two parallel compressors with different characteristics, or run compression in parallel with the dry sound, again with full mix control. There's also a choice of four compressor types and switching for RMS side‑chain detection.

Behind the Preamp and Loudness controls lies Nectar's Saturation section, which emulates the subtle distortions added by mic preamps, consoles and tube mic circuitry. Five different saturation models are available, called Analogue, Retro, Tape, Tube and Warm. A graphical display shows you what's happening to your signal, while any excess roughness can be smoothed away using the built‑in high‑frequency roll‑off EQ. In advanced mode, you can pick one of the five distortion types, then adjust both the amount and the wet/dry mix.

Doubler uses pitch‑shifting to replicate the classic Eventide Harmonizer thickening effect, allowing the user to adjust the gain, pan, pitch and delay of up to four separately generated voices for ADT or chorus effects. In advanced mode, you can set the pitch and delay offsets of the voices using a graphical display with drag points, apply basic EQ to the voices, and also transpose individual voices an octave up or down. 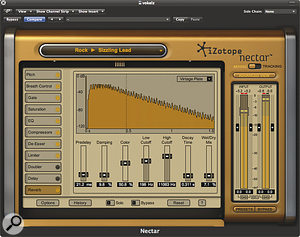 One tool you nearly always need when working on vocals is EQ. The EQ section here is based on Izotope's existing parametric equaliser algorithms, and includes a display of the resulting EQ curve where nodes along the curve allow for 'grab and drag' adjustment, including bandwidth, of five EQ frequencies. Advanced mode seems to show the same display but on a larger scale, and in both views there's a spectrum analyser.

Gating is also a processing essential, as it is often required to remove spill or noise between words or phrases. The simple mode uses RMS detection, which is best suited to vocals, and automatic gain setting. Flipping to the advanced view provides manual threshold, ratio and gain controls, as well as adjustment of attack and release times and the ability to switch from RMS to peak level detection. The inclusion of a ratio control suggests that though this section is described as a gate, it is really an expander, which should make it more forgiving in operation.

Again based on iZotope's existing limiter technology, the limiter prevents clipping on peaks and also generates a level histogram display, so you can see how often the limit ceiling has been reached. Even in advanced mode, there are only two sliders: one to set the threshold and the other to adjust the margin or remaining headroom over a range of zero to 5dB.

Delay is an effect that is widely used on vocals in many genres. The advanced view of the delay section included in Nectar allows switching between Digital, Tape and Analog characters, while the delay itself can be subjected to both modulation and controlled distortion, as well as all the usual controls for delay time, feedback and high/low‑cut filtering. Delay times can be sync'ed to the host tempo.

Going hand‑in‑hand with the delay is, of course, reverb. Nectar's reverbs have been optimised for vocal use, and all you need do is adjust the reverb level, Color (brightness) and size. There's also a nice graphic display of the reverb shape on the advanced page, where you can choose from seven basic reverb types, from plate to cathedral, and adjust all the key parameters using seven faders. These include pre‑delay, damping, decay time, various tonality controls and wet/dry mix.

I din't know quite what to expect from Nectar, but it proved itself capable of delivering extremely polished results, even when I simply used its presets. On occasion, I felt there was too much compression or too much preamp distortion, but such issues can be resolved very quickly using the simplified 'producer' faders on the main page. Advanced mode is useful where you need to adjust the thresholds for limiters, compressors, gates and so on, but even then the number of controls has been kept to a manageable minimum, so less confident users shouldn't be afraid to venture inside from time to time.

The presets cover a lot of ground and, indeed, you ideally need to use them as a starting point, because they determine what combination of effects and processing will be viewable on the main screen, even though you can activate or deactivate any of the other sections via the advanced pages. I think the idea of making the processes 'producer friendly' is a good one, and I applaud the dual‑level approach, where the user can opt to simply tweak the 'producer' controls or dig a little deeper to adjust the more advanced 'engineer' controls. Nectar really does provide all the tools you need to sweeten a vocal track, and its individual sections may also come in useful for treating other sound sources, so experimentation is the key to finding how far you can go. I'm not entirely convinced by some of the presets based on pitch‑shifting or heavy distortion, but as an all‑in‑one approach to vocal processing it's hard to fault, and can be used on many levels, covering pretty much any vocal style.

Waves' Artist Series plug‑in suites take a similar approach, in reducing the number of user controls, and include plug‑ins tailored for vocals, but they don't offer 'under the hood' access to the more advanced settings, as Nectar does.

A simple but effective one‑stop approach to processing the most important element of the mix.