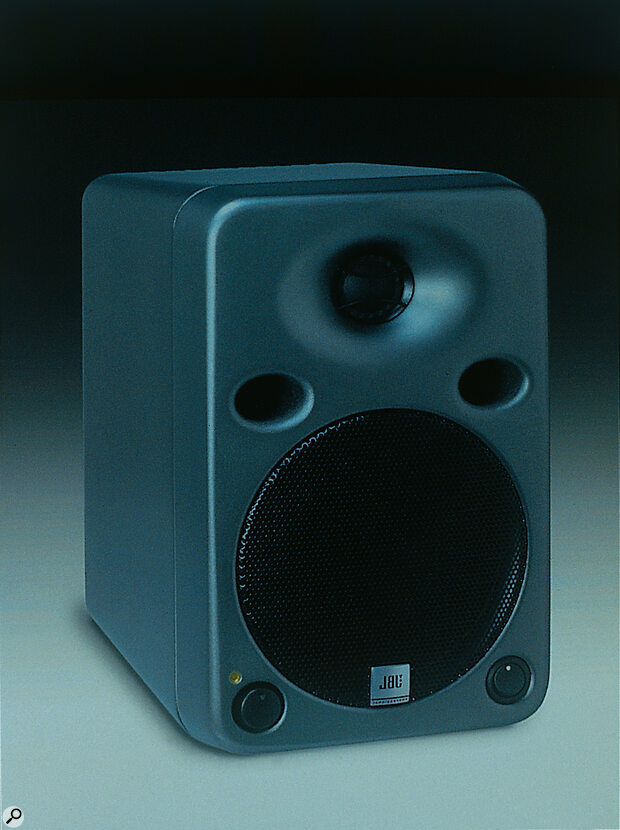 The latest addition to JBL's LSR series of monitor speakers is a small nearfield two‑way active system. Hugh Robjohns lends them his ears.

JBL's approach to the design of monitor loudspeakers over the last five years has changed enormously, as have the technologies and materials used. The characteristically aggressive 'American' sound of older‑generation JBL monitors has been replaced with a softer tonality, far more palatable to European ears, which is a great deal more appropriate for a reference monitor loudspeaker. The company's "Linear Spatial Reference" concept is all about producing a smooth frequency response both on‑ and off‑axis, to provide a consistent spread of sound throughout the room and thus make sure that the direct, reflected and reverberant sound fields created by the speaker, its cabinet and the room all tell the same story!

The flagship of the LSR range is the impressive three‑way passive LSR32 which I reviewed in the October 1998 edition of Sound On Sound. Its smaller relation, the two‑way active LSR28P graced these pages in June 1999, and is also a high‑quality monitor loudspeaker. The LSR25P is a tiny two‑way active model styled much like the diminutive Genelec 1029A. However, its recommended retail price positions it about £200 above that model and roughly the same amount below the Mackie HR824, in a part of the market dominated by the HHB Circle 5 Active (reviewed in SOS January '99). Within JBL's own hierarchy of monitors, a pair of the new LSR25Ps costs almost the same as a single LSR28P, its two‑way active brother, or a single LSR32, the passive three‑way.

The cabinet and baffle are constructed entirely from die‑cast aluminium, in an attractive grey powder finish. A circular rocker switch in the bottom left‑hand corner of the baffle turns the speaker on, and a rotary volume control at bottom right sets the monitoring level. An LED above the volume control illuminates green when powered, but flashes red if either amplifier clips.

The rear panel carries vertical heat sink fins at the top (the speakers should not be used horizontally) while the lower portion is cut away. At the top of this recess are XLR and phono connectors plus an IEC power socket, mounted in such a way that the interfacing leads hang vertically down from the connectors. Consequently, the LSR25Ps can be mounted flush to a wall without problems. Four tapped quarter‑inch holes on the rear panel are designed for use with an Omnimount 75‑series bracket — despite the rigid all‑metal construction, the speaker weighs in at a modest 7.7kg and measures a very compact 173 x 269 x 241mm (whd).

Set deeply into the rear panel are four dip switches tailoring the frequency response of the speaker. The first switch introduces a 36dB/octave high‑pass filter with a cutoff at 80Hz, to assist in matching the LSR25P with a subwoofer. When switched off this filter turns over at 40Hz. The second switch modifies the low‑ and mid‑frequency response to compensate for when the speaker is located very close to a wall or other boundary. The last two switches alter the high‑end response up or down by 1.5dB above 2.3kHz, for personal preference or to suit the HF damping in the listening room.

The two input connectors have different sensitivities: the electronically balanced XLR expects +4dBu signals whereas the phono expects ‑10dBV. With the front‑panel volume control turned up fully, inputs at these nominal levels will generate an output of 96dB SPL at one metre — the maximum peak level is 109dB SPL. The active crossover splits the signal to the two drivers at 2.3kHz using fourth‑order (24dB/octave) filters, and the overall frequency response is quoted as 70Hz to 20kHz between ‑2dB points (the bottom end is 6dB down at 56Hz).

The LSR25P is designed for nearfield use with the cabinets toed in towards the monitoring position and the tweeters at ear level. I found them rather bass‑light when used free‑standing and well away from walls; when pushed up against a rear wall, however, the bass was more acceptable, though they never managed to deliver trouser‑flapping bass — not that it should be expected from a 6.5‑litre cabinet! In general, though, they presented a credible picture of the sound spectrum above around 60Hz. The boundary‑compensation switch helped to rebalance the speakers when positioned in corners.

The major strength of most small speakers is precise stereo imaging, and the 25P is no exception. Like its bigger brothers, this little speaker managed to convey a fine impression of depth with realistic distances and spatial relationships between instruments on appropriately recorded material. Pan‑potted multimic or coincident stereo recordings were replayed with pin‑sharp stereo imaging which remained stable over a usefully wide area — a benefit of the EOS waveguide.

If you like your music to be very loud, the LSR25P might disappoint, particularly in absorbent rooms. However, sitting within a couple of metres of the cabinets I found plenty of level for all my needs without ever causing the LEDs to blink red. Like the other LSR monitors the 25Ps are very clean and open‑sounding with very low distortion throughout the frequency range, even when the level is cranked up — always an indicator of a good loudspeaker.

JBL have really mastered the art of integrating drive units and crossovers, and this little speaker sounds very cohesive. Poorly designed speakers often exhibit a phasey quality if you move your head up and down, and the quality can change dramatically as you move from side to side, but the 25P exhibits no such problems. Although the bottom end is, necessarily, limited by the small volume of the unit, the frequency response is remarkably flat across the spectrum from about 85Hz upwards. There are a couple of small deviations around the crossover point, but even these are well controlled. The phase response is also smooth and linear.

I compared the LSR25P with a range of loudspeakers including my reference PMC AB1s and Bryston amplifier, the similarly sized PMC TB1s, and some active Roland DS90As which cost about the same. It won't come as a surprise to hear that the AB1s came out very comfortably on top (although it was a more closely run affair when they were up against the LSR28Ps, and the LSR32s definitely had the edge!). However, I felt the LSR25Ps' mid‑range and top end were slightly better than those of the small PMCs and the Rolands.

In fact, the upper mid‑range is the real strength of these speakers, which exhibit a great deal of resolution and clarity in this region. The high treble is well controlled, but the lower registers are noticeable by their absence: a decent subwoofer such as Genelec's 1091 would make the world of difference. On their own, the LSR25Ps barely manage to deliver the first harmonic of bass instruments, with no weight at all, and percussive instruments really lose out badly. Having said that, the transient attack of percussive instrumentation is presented very well indeed.

Although I have become quite a fan of the LSR series, the 25Ps are, for me at least, the weakest member of the family. In making such a small speaker, I believe JBL have had to compromise the system too much for it to merit the label of 'reference monitor'. Whilst these little boxes maintain the neutrality and resolution of the larger models through the mid‑range and treble, to my ears, the balance is not right. The overall package is very nicely put together and I will happily award full marks for the rest of the spectrum, but the curtailed bass prevents an unqualified recommendation — particularly compared with similarly priced competitors.

I realise that for many project studios space is at a premium, and as the LSR25Ps work adequately when placed against a wall, they might meet the needs of many prospective buyers, in much the same vein as Genelec's 1029As. However, I wouldn't want to mix on the Genelecs without the 1091 sub — a combination which is only about a hundred pounds more than these JBLs. Then again, if I had that much to spend I'd actually prefer to sit in front of the HHB Circle 5As, or save for another month or two to own the Mackie HR824s.

The LSR25Ps have many fine qualities indeed and should be auditioned if you are in the market for a physically small loudspeaker. However, the inherent compromises of such a diminutive design negate its role as a worthy reference monitor, at least for me. The provision of a high‑pass filter to match the 25Ps to a subwoofer suggests that JBL might be planning to release an affordable powered subwoofer. If that were the case, the resulting system would probably be very impressive indeed.

The one‑inch titanium‑composite tweeter used in the 25P is exactly the same as that employed in both the LSR32 and LSR28P, and radiates into the same Elliptical Oblate Spheroidal (EOS) waveguide, which is intended to control the dispersion of high‑frequency sound across a 100 x 60‑degree (horizontal by vertical) area.

The bass‑mid driver is a simplified version of the 'Differential Drive' devices employed in its bigger siblings. The LSR32 and 28P bass units both have two driven voice coils with a third shorted coil between them acting as a dynamic brake, and employ graphite/polypropylene composite cones. In contrast, the new 25P monitor speaker uses a relatively small 5.25‑inch paper‑coned driver, excited by a high‑excursion 1.5‑inch voice coil. An integral shorting ring is employed "for maximum linearity" and, as JBL like complicated terminology, they refer to this motor system as having a "Symmetrical Field Geometry".

The cabinet volume of the LSR25P is roughly a fifth of that of the LSR28P at a mere 6.5 litres, and its two ports vent to the front below and to either side of the tweeter (the 28P vented to the rear through a larger single port). These reflex vents have the flared "Linear Dynamics Aperture" design seen in other LSR models, which is claimed to reduce 'chuffing' and port compression by properly matching the internal and external air impedances.

The smallest members of JBL's highly regarded LSR series offer low distortion and a very flat frequency response from 80Hz up, but many users will require a good subwoofer.